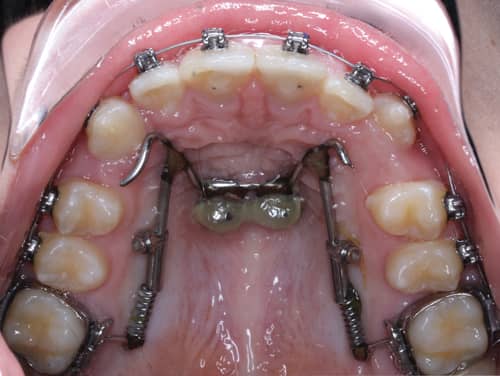 One increasingly common application of TADs is to provide anchorage for maxillary molar distalization. Although distalization of maxillary posterior teeth is not a novel treatment technique, prior to the utilization of skeletal anchorage there were a number of significant unintended sequelae such as dental tipping, bite opening, and anterior anchorage loss. Numerous appliances have been designed and utilized, such as the Distal Jet appliance, Pendulum appliance, Carriere® appliance, and Cetlin appliance, among others, in an effort to efficiently distalize using dental anchorage. Although many of these appliances have special modifications to mitigate the potential mechanical side effects, research studies show that these side effects often occur nonetheless. Patient compliance for some of these appliances can also be a significant concern.

In this article, we will show that TAD-based distalization of the maxillary posterior dentition can alleviate previous frustrations and known side effects of distalization appliances and can provide an efficient, compliance-free mechanical solution for maxillary molar distalization.

The first technique highlights the “binary use” of TADs to provide absolute anchorage during maxillary posterior distalization, while subsequently providing maximum anchorage during retraction of the maxillary anterior teeth. The second technique outlines the use of a modified Distal Jet appliance, which relies on two mid-palatal TADs for anchorage.

The ideal case selection parameters for maxillary molar distalization, in our opinion, are Class I or Class II dental malocclusions with maxillary anterior crowding and/or increased overjet, with an underlying skeletal Class I or mild Class II pattern. The alternative in many of these cases would often be maxillary premolar extraction, or Class II mechanics for occlusal correction. The advantages of TAD-based distalization in these cases include avoidance of extraction of permanent teeth, elimination of patient compliance, shortened time in fixed appliances, elimination of mandibular incisor proclination associated with inter-arch mechanics, and maintenance of the profile.

Both techniques rely on the placement of palatal TADS. Our strong preference for palatal placement comes from both research publications and clinical experience, which support the substantially smaller risk of root damage and TAD loosening or failure when placed in the palate. Various TAD systems are utilized in our practices (Spider Screw from Ortho Technology; Dual Top from Rocky Mountain® Orthodontics), as well as various TAD lengths (6 mm to 8 mm). Techniques for the placement of TADs can be found elsewhere in the literature, and there are various methods that have been shown to be highly successful. Our TADs are placed with local anesthetic infiltration.

An 11-year-old girl presented with chief concerns of anterior crowding and dental malalignment (Figure 1). Diagnostically, the asymmetric nature of her orthodontic issues was of interest. The right side was a very mild Class II dental relationship with very mild crowding, and the maxillary and mandibular midlines were centered facially and coincident with each other. However, the left occlusion was a full cusp Class II with a full buccal cross-bite of tooth #12 and almost all of her dental malalignment was exclusive to teeth #9 through #12.

Extraction of tooth #12 was discussed as one possible option. However, the patient and parents wanted to try to preserve all of her teeth and attempt correction with distalization mechanics. Since she had an esthetic profile and only a mild Class II skeletal relationship with normal incisor angulations, it was determined that this would be an ideal case for TAD-based distalization.

A single TAD was placed on the palate between the roots of #12 and #13, with a 19 x 25 SS stabilizing archwire directly bonded with composite to both the bracket-top TAD and the palatal surface of #12. With sectional mechanics on a 16 x 22 SS archwire, the first molar was distalized with nickel titanium coil spring to Class I occlusion in 5 months.

At that point, the TAD was removed and repositioned between #13 and #14 on the palate and secured to #14 occlusal surface with a new 19 x 25 SS wire. Retraction of #11 and #12 was then commenced with elastic chain. Tooth #13 was allowed to passively “drift” distally during most of this process, which took approximately 7 more months. Once teeth #11 through #14 were in Class I positions and all the spaces were closed, continuous wires were utilized on the upper arch and normal orthodontic mechanics were initiated.

The result shows that an ideal Class I occlusion was achieved on the left side with coincident midlines, without the need for extractions. The gingival health was significantly improved, and the palatal TAD surgical sites healed nicely.

This distalization system is very simple to employ, and is cost-efficient since no lab appliances are needed and the TAD can be reused and relocated on the same patient after sterilization. The main disadvantage is that extensive chairside “doctor-time” is needed to fabricate and bond the stabilizing wires, as well as to remove and replace the TAD.

A variation of this technique using mid-palatal TADs (Figure 2), can eliminate the need to remove and replace the TADs, and allows for the stabilizing wire to be fabricated in the laboratory. The failure rate of the TADs is quite low in our experience, and breakage of the stabilizing wire is nonexistent. However, any loosening of the TAD would have to be addressed quickly, since the anchorage system would be disrupted.

This technique is based on a modification of the standard tooth-borne distal jet appliance (Allesee Orthodontic Appliances). Two palatal TADs are placed, which serve as the primary source of anchorage. In earlier appliance designs, wires were bonded to the palatal aspect of the first premolars. However, now the preference is for TAD anchorage only.

An 11-year-old girl presented for Phase 2 orthodontic treatment (Figure 3). Teeth #8 and #9 had been recently traumatized and were treated with root canal therapy. Tooth #11 was blocked out of the arch due to insufficient arch length, and the posterior teeth were in a Class II relationship.

An alternative treatment plan was extraction of upper first premolars. However, the family preferred a nonextraction approach. The patient presented for placement of two palatal TADs and placement of orthodontic separators. Two weeks later, with confirmation of TAD stability established, bands were fit on the maxillary first molars, and a pick-up impression was made for a TAD-based distal jet appliance. Soldered loops were designed to fit around the head of the TADs with 1 mm clearance, and a low-viscosity flowable composite was used to bond the head of the TAD to the appliance.

The appliance was activated every 8 weeks until an overcorrected Class I position was achieved. At 6 months, brackets were bonded on the premolars to retract them into a Class I position and to open up space for eruption of #11. At 12 months, the maxillary anterior teeth were bonded, and routine leveling and aligning of the arches commenced.

A 12-year-old boy presented in the permanent dentition with a Class I molar relationship with Class II premolars and labially ectopic canines (Figure 4). Due to a flat upper lip, a nonextraction treatment plan was selected. A TAD-based distal jet was fabricated in the manner described above. However, no wires were connected to any anterior or premolar teeth.

Usually, the TADs are removed at the same visit. No anesthetic is used for TAD removal unless the palatal tissue is inflamed and sensitive. Generally, TAD removal is a fast and painless procedure. The wound heals quickly, and the patient is advised to rinse thoroughly after eating for the first 3 days, in order to prevent food impaction into the healing implant site. Our experience has been that most palatal TADs remain stable throughout the appliance therapy and offer resistance upon removal despite being used as anchors for a long period of time.

This case highlights the use of the TAD-based distal jet to correct a very common orthodontic problem: labially ectopic canines. The use of palatal anchorage alone, without any dental anchorage, highlights the ability for two palatal TADs to effectively distalize first and second molars. No significant tipping of the molars was noted during the distalization process. A “super Class I” molar position was needed to create a Class I premolar and canine relationship.

A 16-year-old girl presented in the permanent dentition with a Class II malocclusion characterized by excessive overjet and labio-version of #8 (Figure 5). The family preferred to avoid extraction of premolars. This patient elected to have her wisdom teeth removed at the time of the TAD placement to allow for easier distalization.

A TAD-based distal jet was fabricated and activated in the manner described above. Six months later, a Class I relationship was observed and the upper arch was bonded. Mild activation of the distal jet appliance was maintained to allow for slight overcorrection. Within 6 weeks of placing brackets, significant improvement in alignment and reduction of overjet were noted. This case highlights the effectiveness off the TAD-based distal jet in an older teen with significant overjet and crowding.

While there are multiple techniques in the literature for TAD-based distalization, we have shown two techniques that have proven to be highly effective in a routine private-practice clinical environment. Both techniques use palatal TADs, due to the higher success rate in comparison to placement in the buccal alveolus. In addition, both techniques have the following features in common:

We propose that TAD-based distalization is a reliable and efficient technique and should be part of the assortment of treatment modalities in the contemporary orthodontic practice. Further clinical research is recommended to establish more specific clinical guidelines. OP

Alexander Waldman, DMD, MMSc, is a graduate of the University of Pennsylvania School of Dental Medicine and completed his Masters of Medical Sciences degree in oral biology and orthodontic training at Harvard University School of Dental Medicine. Waldman lectures on interdisciplinary dentistry, adult orthodontics, and implant anchorage. He is a Diplomate of the American Board of Orthodontics and is in private practice in Beverly Hills, Calif. 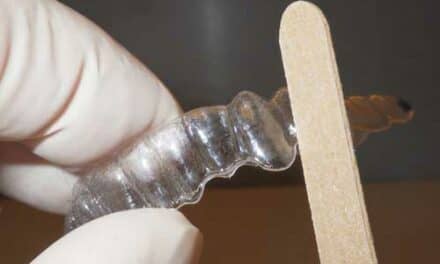 Take a Survey on Retention