OP: To what degree is your practice paperless now?

Moin: Completely. The way it happened for us, we got rid of the treatment card 5 or 6 years ago. We had a monitor at the chair and we entered what we did at the chair, so we stopped pulling charts and filing charts.

However, we were still making charts. The charts contained incoming letters from general dentists or oral surgeons. They also had insurance papers or a health history or informed consent. The chart contained five or six single pages. In the past year or so, we started scanning all the incoming letters into the patient’s chart and shredding the letters, so our charts became thinner and thinner. The last thing we did was introduce the electronic pad, a 3- x 4-inch square that is connected to your computer and has a pen attached to it. So for example, we make a contract on the computer and we go over it with the patient on the computer, and then they sign on the ePad, and that signature gets transferred to the document. If the patient wants a copy we can print one for them, but we don’t hold any paper in the patient’s chart.

Let’s say a new patient calls in for an initial consultation. Instead of telling them to come in 10 or 15 minutes early to fill out paperwork, we invite them to go on our Web site and learn about the office, take a visual tour of the office, and learn about me. They can also fill out their health history on our Web site and send it to us electronically. This is HIPAA-compliant. We get that health history before the patient comes in so we can look for their insurance, see how much coverage they have, and learn about them so that when they come in, my treatment coordinator will review the health part of it with them and then ask them to sign to make sure it’s accurate.

OP: Do you have any sense of the time saved in pulling and filing charts?

Moin: In the old days, we used to have a part-time person—usually a high-school kid—come in and pull all the charts for the next day and file them. It was a couple hours of work to do that. And now we don’t need that position. We have, I believe, 19 computers in the office, and you can go to any computer and get all the information you need.

OP: What kind of hardware do you use?

Moin: Mainly Thin Clients. When Microsoft introduced their operating system in 2003, that had expanded capability on terminal servers, so we converted most of our stations to Winterm. Thin Clients are maintenance-free. No hard drive, no RAM. Also, you don’t have to install upgrades—you only do that on the terminal server. We have four regular PCs, and those have some other things attached to them. For example, one of the PCs has a scanner.

OP: What do you do for patient check-in?

Moin: We have a computer that’s in our reception area and patients type in their names, plus we have biometrics. We register their finger’s image so the computer can recognize it. When they come in, they put their finger there and it will recognize that they are in the office. As soon as they check in, their name pops up at a station in the clinic and that computer will also color-code the names. If Johnny comes in half an hour early, his name will be printed in green so we know that we don’t have to rush out and get him. As soon as his appointment arrives, his name turns white; 10 minutes later it turns red. So you look at the screen and see a couple of reds and you know that you better hurry up because people are waiting.

It also makes interoffice communication very easy. For example, when the patient comes in with a loose bracket and was not scheduled to do that, normally the assistant will get up and talk to Mom about how Johnny has a loose bracket and it will take an additional 20 minutes. Can you wait? Now, instead of doing that, from her chair she can send a message to the front desk telling Mrs Jones that Johnny had a loose bracket and we want to replace it.

OP: Is there any other technology on the horizon that you think would make a big difference in your practice?

Moin: I am lucky enough that there is a [cone beam computed tomography] CBCT machine in our building. I don’t have to invest in it, and we send selected patients over for cone beam x-rays.

OP: Any tips for those who are not technically inclined?

Moin: Whatever practice-management software you buy, I recommend going to user’s meetings. You sharpen your skills, your learn what is coming next, and you can give them feedback. Then they hear that there is interest in doing things a certain way and they put it in their updates.

Kambiz Moin, DMD, MPH, is in private practice in Manchester, NH. He can be reached at 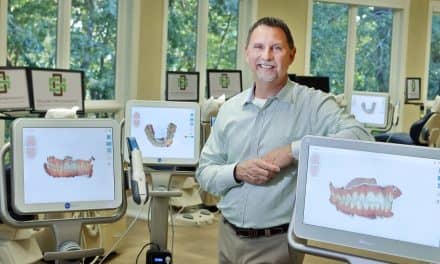