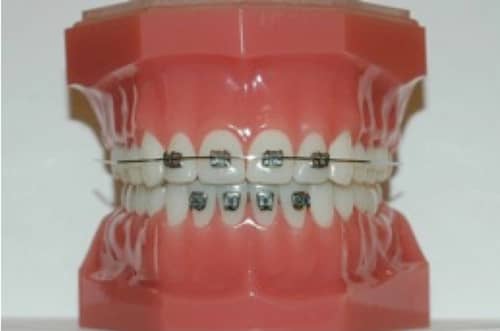 A fundamental objective of the Straight-Wire Technique (SWT) is to simplify orthodontic treatment by using only straight wires to achieve an optimal occlusion. Here, I describe a novel technique, which utilizes attachments of two dimensions and two prescriptions in the same dental arch to achieve this objective. Specifically, the upper and lower central and lateral incisors are bonded with brackets having a novel 0.019″ x 0.025″ slot with an Andrews prescription, while the posterior teeth are bonded with attachments having 0.022″ x 0.028″ slots with an MBT prescription. When using a 0.018″ x 0.025″ stainless steel (SS) wire followed by a 0.019″ x 0.025″ SS wire as the working archwire sequence, the proposed bracket setup improves control of tooth movement in the posterior as well as the anterior segments of the dental arch.

The appropriate crown tip and torque required for each tooth to establish an excellent occlusion was determined from studying the casts of ideal nontreated cases by Larry Andrews in the 1970s.1

Clinically, the programmed values of the straight-wire system can be fully achieved only if the archwire is large enough to fill the bracket slot and rigid enough to control root movement.2,3,6 This task of simultaneously filling the bracket slots of an entire dental arch with a flat archwire has proven difficult for orthodontists because of the associated increase in friction and force levels. Therefore, modifications to the Andrews Straight-Wire Technique were developed to compensate for this shortcoming. One method was to vary the amount of torque built in the brackets and use undersized wires. The two most popular modifications gave form to what is known as MBT (McLaughlin, Bennett & Trevisi) and Roth prescriptions. Another option was to only fill the slots of the anterior brackets by using a bi-dimensional setup.

In the first option, the distinguishing feature between various preadjusted appliances is the amount of torque programmed into the brackets and the preferred archwire size used to control archform and leveling. For instance, maxillary central incisor brackets have different torque value for the following prescriptions: 7° for Andrews, 12° for Roth, 14° for Alexander, 17° for MBT, and 22° for Ricketts and Hilgers.2

A major disadvantage associated with high torque prescriptions is that they are not effective in delivering the correct crown torque when the upper or lower teeth are moved in a labial direction. For example, a 0.019″ x 0.025″ wire in a 0.022″ Roth maxillary central bracket would allow the upper central incisors to tip forward up to approximately 15° before any lingual crown torque expression. The high range in torsional play exists in conventional brackets as well as in self-ligating brackets.6

The second option was developed by Anthony Gianelly and is called the Bidimensional Technique.7,8 In this system, the incisor brackets have 0.018″ x 0.025″  slots with a Roth prescription, while the remaining teeth are bonded with standard edgewise brackets having 0.022″ slots with no prescription. The archwire used for the working and finishing stages of treatment is a 0.018″ x 0.022″ SS wire. This technique effectively resolves the archwire-slot size play in the anterior segments of the upper and lower arches but lacks three-dimensional control in the posterior areas. To eliminate the posterior torque play, Gianelly advocated twisting the archwire distal to the laterals or canines 90° to create a ribboned wire with 0.022″ x 0.018″ posterior sections.7

Although the idea of ribbon-bending the archwire is interesting in theory, in practice it substantially departs from the concept of the Straight-Wire appliance. This in turn may explain the lack of clinical appeal for the Bidimensional Technique among 0.018″ and 0.022″ slot edgewise practitioners.

The 019/022 Split-Edgewise appliance presented here is a modification of the Bidimensional appliance, with the objective of maximizing three-dimensional control of both the anterior and posterior teeth, while minimizing archwire bending.

Description of the Appliance

To configure the Split-Edgewise system, the dental arches are bonded in the following manner: Novel 0.019″ x 0.025″ slot brackets (Opal Orthodontics, South Jordan, Utah) on the upper and lower incisors (see photo above) and 0.022″ slot brackets on the posterior teeth. The prescription of the 019/022 Split-Edgewise appliance is as follows: The upper central incisor brackets are programmed with 7° torque and 5° tip; the upper lateral incisor brackets with 3° torque and 9° tip; and the lower incisor brackets have -1° torque and 0° tip. These values are congruent with the original Andrews prescription.2 The posterior attachments used here have an MBT prescription. The Split-Edgewise technique is not confined to any particular treatment philosophy or school of thought. Any type of posterior 0.022″ bracket, conventional or self-ligating, can be used in conjunction with the anterior 0.019″ Split-Edgewise brackets.

Rationale for the Split-Edgewise Technique

The impetus for developing the Split-Edgewise technique and the 0.019″ slot appliance was twofold. The first incentive was demographics; the second was biomechanics.

In a U.S.-based survey, about 55% of orthodontists declared routinely using the 0.022″ slot edgewise appliance and only 5% a Bidimensional system.4 A similar survey conducted in the United Kingdom in 2010 revealed that 90% of responding orthodontists preferred the 0.022″ preadjusted edgewise system and the MBT prescription was more popular than the Roth formula.5 In both surveys, a significant number of orthodontists did not finish with 0.021″ x 0.025″ size archwires.

Therefore, there exists a potentially broad appeal for the Split-Edgewise appliance, as it would allow a high percentage of orthodontists to fully achieve the benefit of a Bidimensional Straight-Wire appliance by routinely filling the bracket slot of the anterior teeth while using larger archwires to control arch form and leveling.

Gianelly’s Bidimensional Technique has been shown by Li et al to be a practical and efficient way to retract the incisors bodily using sliding mechanics.8 With this article in mind, I would argue that using an 0.019″ x 0.025″ SS wire in a 0.019″ slot is superior to a 0.018″ x 0.022″ SS wire in a 0.018″ slot for two reasons. First, increasing the height of the slot decreases the torsional counter-force needed at the bracket wire interface to maintain root position. Second, the torsional stiffness of a 0.019″ x 0.025″ SS wire is superior to that of a 0.018″ x 0.022″ SS wire.

By inference, this means that an orthodontist can expect less tipping of the incisors during space closure using the 019/022 Split-Edgewise system compared to the 018/022 Bidimensional appliance. In addition, the molars will tend to tip, roll, and rotate less during protraction when using a flat 0.019″ x 0.025″ SS wire versus a flat 0.018″ x 0.022″ SS wire.

In summary, the Split-Edgewise technique described here uses novel 0.019″ brackets on the upper and lower incisors, 0.022″ slot attachments on the remaining teeth, and preferably flat 0.019″ x 0.019″ SS or 0.018″ x 0.025″ SS followed by 0.019″ x 0.025 SS wires for the working and finishing stages of orthodontic treatment. This new format offers the following advantages:

A 15-year-old male presented a mild Class III malocclusion and moderate bi-maxillary protrusion. The patient showed a shallow overbite and insufficient overjet with moderate mandibular crowding. The lower second bicuspids were congenitally missing. Both the maxillary and mandibular incisors were proclined (Figure 1).

Treatment objectives were to reduce the lip protrusion and correct the axial inclinations of the anterior teeth. It was decided to extract the upper second premolars as well as the lower second primary molars. A Split-Edgewise bracket appliance was bonded in both arches. After preliminary leveling and alignment was obtained, 0.019″ x 0.025″ SS flat wires were placed and power chains were used to close spaces (Figures 2 and 3). The maxillary and mandibular anterior teeth were retracted while the molars were protracted. Space closure was completed under moderate anchorage conditions without bonding the second molars.

Favorable soft tissue changes can be seen post-treatment, as well as excellent inclinations of the maxillary and mandibular incisors (Figure 4). OP

A 31-year-old male presented an asymmetric Class II malocclusion with mild maxillary constriction and a Class II skeletal relationship. The patient showed excessive overbite and overjet, small maxillary lateral incisors, moderate to severe mandibular crowding, and an accentuated curve of Spee. The lower dental midline was deviated 3.5 mm to the left and a posterior right crossbite was present (Figure 5).

Treatment objectives were to correct the maxillary constriction and the Class II skeletal relationship, resolve the mandibular crowding, and establish a Class I canine occlusion. The proposed treatment was surgically assisted rapid palatal expansion (SARPE), extraction of #35 and #44, followed by mandibular advancement (BSSO) with genioplasty.

However, after the SARPE operation, the patient experienced prolonged bleeding/coagulation problems and decided not to undergo the BSSO procedure. The patient’s malocclusion was reassessed and treatment plan revised (Figure 6). It was decided to extract the upper first premolars as well as the lower right second bicuspid to correct the asymmetric Class II malocclusion and center the lower dental midline.

A Split-Edgewise bracket appliance was bonded in both arches. After preliminary leveling and alignment was obtained, 0.019″ x 0.025″ SS flat wires were placed and power chains were used to close spaces. The maxillary anterior teeth were retracted in two steps with sliding mechanics, for canine retraction first (Figure 7), followed by incisor retraction (Figure 8). The mandibular anterior teeth were moved to the right to correct the lower dental midline while the mandibular right molars were protracted (Figure 7 ).

The result of the treatment is shown in Figure 9. The maxillary lateral incisors were subsequently widened with composite restorations on the distal surfaces. OP 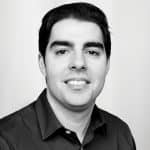 George Kyritsis, DMD, MSD, has been in private practice in Montréal, Canada, since 1999. He attended Montréal University where he earned his Doctorate of Dental Medicine degree in 1996. He went on to receive his Master of Science degree and Certificate of Orthodontics from Boston University. Kyritsis has authored numerous patents on miniaturized orthodontic appliances and on sterilization pouches for autoclaving orthodontic pliers. 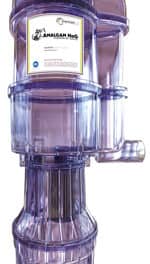