Are You Ready to Get Busy? 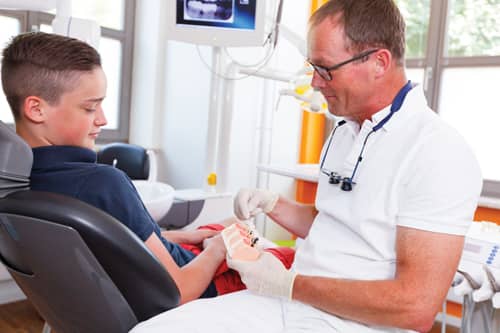 We all know what we need to do, before summer: Get to the gym, shed a few pounds, assemble a vacation wardrobe. But what about preparing your practice?

Consultants say it’s all about planning.

Nancy Hyman, founder of Ortho Referral Systems, works in her husband’s orthodontic practice as well as helping other offices increase their referrals and case acceptances. She says practices should start planning for summer the previous fall.

“You can always start today,” Hyman points out. “But in our office, I prefer to have a plan for each month. That’s not to say I’m not changing and revising my plan, but in October I am setting up reminders so that, in April, I am contacting schools to set up May dental screenings.”

Each of those dental screenings includes an orthodontic screening for students, which helps build the pipeline for patient starts. At the screening, students get a dental hygiene kit that includes a toothbrush, toothpaste, dental floss, and a business card.

Hyman also advises practices to hand-deliver announcements to dental offices in April or May, reminding dentists that summer is the optimal time to refer patients for an orthodontic consultation.

Another way for practices to increase their patient starts in summer is by devoting a specific regular time to marketing.

“I work with some offices that have a designated ‘marketing day’ once a week or once a month,” Hyman explains. “They might meet in the morning and then send out teams of two to dental offices, then meet in the office at the end of the day regarding patient referrals. Some dedicate a half-day once a week.

“When we have a marketing day, we have one person in charge of calling observation patients. If you can implement a ‘practice growth day,’ it can involve anybody. Insurance staff can report on insurance status, the team that goes to dental offices reports about new associates, and so on. The treatment coordinator should call pendings; one-third of our new starts are follow-ups.”

To counter this, Shoemaker advises practices to focus on low-level delinquency when accounts are only 30 days past due, as time may be limited. Also, make initial insurance payments a top priority, with delinquent claims given a lower priority as insurance delinquency from the summer can be cleaned up quickly by the end of September.

“Make sure your production is getting on the books,” she emphasizes. “Don’t let someone start and slip through the cracks. The financial coordinator and treatment coordinator should know what starts are coming and cross-reference with each other to attain accuracy in production.”

Stick to a Schedule

Char Eash, CEO of Profit Marketing Systems South, is adamant about setting the schedule and contract/start goals for the year by determining the income to be derived—and the days and hours to be worked—based on a minimum of 10% to 15% growth.

She explains, “The summer growth potential is created by adding workdays in the most productive months and removing them in months that are not, such as working 15 days in July but only 10 days in September or May. When offices change their schedules in the summer to create more starts, remember the math has to be present in the adjustment column 6 to 8 weeks later.

“Use the schedule to your advantage by placing the observation-ready and Phase 2-ready appointments in the months with fewer starts. Also, no free treatment in the summer! Place your GP kids and other courtesies on admin days that are not counted for practice contract growth.”

Hyman, however, says doctors might want to consider adjusting their office hours for summer. “You may want to add days to your schedule,” she says. “We average 13½ days in a month. In July and August, we go up to 15 days and make sure we have a system in place to take records at the time of the initial exam or observation exam where treatment is recommended, so that there’s not a hesitation—so you can jump in and get started. “

And as far as hours go, Hyman points out that her husband’s practice is open from 7:30 am to noon (or 5 pm) for patients. However, the practice has found that the bulk of its patients comes until about noon and then about 2 pm or 3 pm—the opposite of what happens during the school year.

“It starts to peter out because families want to get on with their days and go to Disneyland, swim club, or the zoo,” Hyman says. “In Arizona, with the heat, they’ll start as early as 7 am; or they’ll do evening hours to accommodate the heat in the summer.”

She adds, “Get on the school websites and get their schedules to know when to add days and possibly hours.”

To Hire or Not to Hire

Thinking about adding team members just for summer? Consultants differ on whether that’s a good idea.

“If I’m an orthodontist, I don’t want increased staffing; I want my fixed expenses to be similar. My profit will be in keeping my fixed costs the same and increasing production.”

Shoemaker, on the other hand, sees some value in adding temporary administrative help for the summer.

“Even if you can get someone who can help you with scanning documents, that would be a big help. I still see offices that don’t scan in the explanations of benefits from the insurance company because of time constraints.”

Hyman sees pros and cons to adding staff members for the summer.

“The negative to adding staff is that the person may not be trained on the office system,” she says. “However, I have seen offices use a high-school student to greet and seat patients, to keep things flowing. Some offices use externs for business administration for the front office.”

Hyman’s husband’s practice also once had a mom, who was going back to school and who wanted some hours, stand in the front area and greet patients and confirm everybody’s cell phone number and email address, then enter those into the computer. Every patient who provided updated information was then entered into a contest to win a $25 Target gift card. In the end, the practice found that a lot of people had changed their numbers and addresses, making the mom’s contribution valuable to the practice.

Additionally, Hyman points out, “You may want a records tech, because you want those records the first day of treatment. Or, if an office has Saturday hours over the summer, you could have an extra assistant on staff. You could find someone who works 3 days at another office, so you can get them Fridays and Saturdays.”

Is There Such a Thing as Too Busy?

When asked if there’s anything doctors can do, to make sure they and their staff members don’t get too overwhelmed during the busy months, Eash says summer schedules should be set up the same as during the school year—with the exception of possibly removing the debonds in July and August, and replacing them with starts.

“My offices have the daily contract goal based on the number of days to be worked during the year,” she explains, “So any additional days or starts added would just increase the annual start/contract goal set.”

Eash also recommends looking at how to optimize production throughout the year.

“One trick is to even out your observation or growth-and-development pool through the year,” she says. “Look ahead each month to determine where the current month’s observations should be placed to control the placement of these appointments throughout the year. Do not place these appointments in the busy months, like January, July, and August, as eventually they will be observation ready [starts].”

Hyman also urges offices to have goals. She suggests having some incentives in place, as well.

“Set very specific goals for the summer period, not each month,” Hyman says. “It’s no longer that every school is out June 6 and goes back September 3. Some get out May 15, May 22, June 5—there’s a 3- to 4-week swing. Some students go back to school August 8, and some public schools begin after Labor Day. So have a summer goal or do it by week.”

She adds, “Goals can change by the year. So if there have been snow days and the summer is shorter that year, take that period of time and create goals. Consider fun gifts or adventures, if the goal is met; it could be a lunch or a margarita dinner. The doctor and team must know what their real summer season is; it’s no longer June, July, and August. Knowing that will be enormously helpful for goals for the summer period, not only monthly goals.”

Plan for the Ups and Downs

Although summer can be the peak season for income, expenses generally stay the same every month. So how can doctors keep cash flow even throughout the year, instead of having peaks in the summer and valleys during the orthodontic “off-season”?

Shoemaker acknowledges that keeping things on an even keel can be tough. “I think managing cash flow includes evening out how the income is disbursed,” she says. “In the busy summer months, you don’t have extra cash to spend just because income is up. It just needs to be evened out; you need to look at an annualized expense.”

She also notes that the end of June generally marks the halfway point for an office’s fiscal year.

“Look at all your ratios—adjustment ratio, collections ratio, receivables ratio, adjusted collection ratio—and see where you are. Once you get a pulse on where you are, there are a few management items you can take a look at to prepare for the rest of the year. For instance, what is happening if your collection ratio is down? What percentage of your starts are paying in full? Should you alter the discounts you are providing?”

“I’ll get someone in the front office to call the older observations: Get 11, 12, or 13, and get them in this month. We get everybody in, but if we have a few slow months, I’ll stack the ones that are more likely to start.”

Eash also recommends looking at how to optimize production throughout the year. She says, “One trick is that, before we see new patients, if they are put into observation or growth and development, we spread them out 6 to 8 months. We don’t want them all in June and January; they will eventually become readies.

“We want to utilize all the time and talent we have, throughout the year, to take advantage of the summer months. I would do the same in a big month. January is usually flex-money month, so work 15 days. And in December I might work 8 days. The days of depending on summer are over,” Eash points out. “You have to be productive every day.” OP

Kristen Lambert is a freelance writer for Orthodontic Products. She can be reached at [email protected].