The origin of manufacturing thermoplastic sheets goes back to 1896, but the thermoforming process was not well known until the 1950s. Back then, thermoforming plastic was basically a passive wrapping process to package goods. It was Henry Nahoum who discovered the plastic could be formed to act as a force-generating orthodontic appliance. Since then, much has changed.

A major breakthrough was the addition of attachments to deliver forces in the directions that the plain plastic could not. In a manner of speaking, orthodontists saw the attachment as a bracket analogue, where the plastic appliance was the wire. Attachments are placed on the labial surfaces of teeth, and the appliance’s forces are transmitted to the crown at that position. Clearly, this was a spin-off from the brackets and wire mind-set. While this mind-set worked fine with fixed appliances, translation into the Invisalign System language was not entirely satisfactory.

If a tooth becomes stubborn in movement, the most common solutions are either tight ligation to force the wire into the bracket slot, or replacing the archwire with a heavier-gauge wire. Either of these solutions are “forceful” creations of force systems within the bracket. They are transmitted to the crown and eventually to the root. In contrast, the aligner force magnitude cannot be changed midtreatment. It is most important to recognize this, because brute force is not an alternative in aligner treatment.

Forces must be choreographed in a manner such that the gentle forces act on various points on the crown and root movement is not an unavoidable consequence. Instead, the choreography of the attachment and aligner is founded on root movements. It is critical to understand this difference between fixed appliances and Invisalign aligners: Whereas the clinician designs the wire-generated forces to act within the bracket, Invisalign’s newest optimized aligner attachments are now principally designed to move the roots. 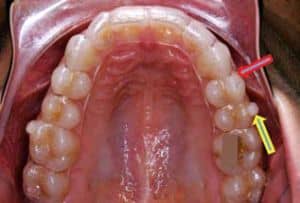 Figure 1: Both forces yield the same rotational result. The force application designated by the red arrow is on the tooth surface, and the direction is palatal. It may move the tooth palatally if the aligner does not fit well. The force application designated by the yellow arrow is on the attachment surface, and the direction is mesial. The resulting side effect may be mesial movement of the tooth. Root morphology is a significant player in the final tooth movement.

A force-system approach with root position in focus eliminates the unnecessary, ineffective, and bulky alternatives in attachment designs. For example, as seen in Figure 1, a premolar tooth could be rotated either by pushing on the broad surface of a rather prominent attachment, or by pushing on the tooth directly but in a lingually directed point-of-force application. 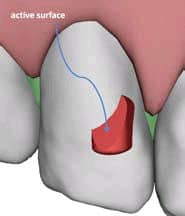 Figure 2: The active surface of an optimized attachment. Forces from the aligner are communicated to this flat surface.

Both of these forces will mesially rotate a premolar tooth. The red arrow, however, applies force directly onto the tooth, whereas the yellow arrow goes through an intermediary: the attachment.

It could be argued that if forces could act on the tooth surface directly or through very small attachment designs, then aligner efficiency would improve. The improvement would come from avoiding excessive stretching of the aligner plastic. If the plastic were forced into position over a bulky attachment, the opposite lingual side would squeeze the tooth and possibly diminish its ability to move. Accordingly, the attachment and aligner geometry should allow long-term application of forces. As teeth move, attachment positions could change and, in time, could alter the direction and angle at which forces are applied.

Vertical control is different with aligners. 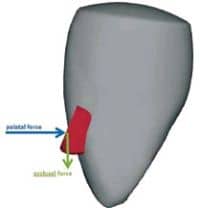 Figure 3: The palatally applied force can create extrusive force no matter where the point of force application is along the active surface. 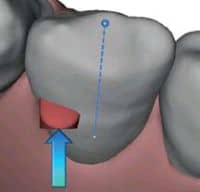 Figure 4: When an optimized attachment is placed off-center, its distance from the facial axis as well as its orientation will impact the force application and subsequent tooth movement.

As soon as a tooth is touched by a fixed appliance, it tends to extrude. Interestingly, the opposite is the case with aligner therapy. Superior attachment designs minimize the intrusion, which expresses mostly in the form of tipping. Could the aligner extrude the tooth, or prevent intrusion, while rotating it? The answer ought to be yes. For example, the red arrow in Figure 1 should point occlusally as well as palatally. The optimized attachments are designed with this in mind.

The optimized attachment design incorporates an active surface, which is a flat surface onto which forces of the aligner are communicated (Figures 2–5). Two critical elements determine the force system applied to the tooth:

1. the position of the attachment on the tooth; and
2. the orientation of its active surface.

These design elements are essential to offset the intrusive tendency of aligners. The active surface is oriented such that engaging the aligner imparts a slight extrusive force on the tooth. To rotate the tooth around its long axis, two conditions must be met. First, the force must be applied away from the long axis of the tooth. This arrangement is easily accomplished because the axis is within the tooth itself. Second, the force must be directed to create a rotation in the desired direction. This can be done by orienting the active surface appropriately. 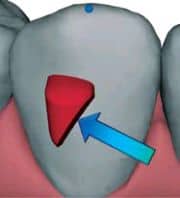 Figure 5: An optimized attachment can be placed by the software near the facial axis. The active surface is oriented to transmit rotational andextrusive forces simultaneously.

The algorithm of the Align optimized attachment software meets each of these conditions automatically. For example, to accomplish a mesial-in rotation, the software assumes a placement of the attachment on the mesial portion of the tooth, with the active surface oriented lingually (Figure 3). It then proceeds to check for interferences that might occur during treatment if the attachment were bonded at this location. If there is an interference, the location is unacceptable. The software then assumes a new location nearer the center of the tooth and proceeds to determine interferences throughout the planned treatment again. This process repeats until an acceptable location with no interferences is identified.

It is important to realize that as the attachment location approaches the center of the crown, the tendency to rotate the tooth by the force applied to the lingually oriented active surface of the attachment is greatly reduced. It becomes necessary to orient the active surface more mesially in order to maintain the rotational force system. The software reorients the active surface automatically. Templates for bonding optimized rotation attachments are fabricated with each of these considerations satisfied.

To read more articles by and about Tuncay, search for his name in .

To summarize, Invisalign optimized attachments are automatically designed and placed by the software to do the following:

Orhan C. Tuncay, DMD, is chairman and program director of the Department of Orthodontics at Temple University. He is the founding editor of four orthodontic journals: Orthodontics & Craniofacial Research, Progress in Orthodontics, Cases & Commentaries in Orthodontic Technology, and Clinical Reports & Techniques. He has private practices in center city Philadelphia and Bryn Mawr, Pa. He can be reached via e-mail at or through his Web site, rittenhouseortho.com.

John Morton is the director of research and technology at Align Technology. 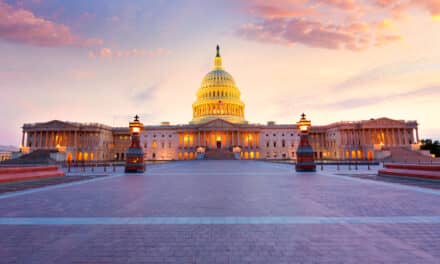 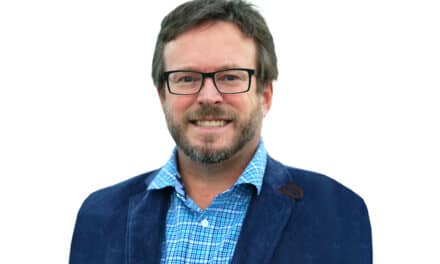 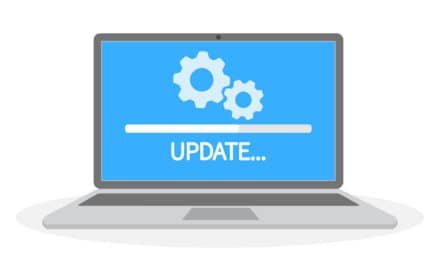