Views You Can Use

What orthodontists should be looking for in cone beam CT scans

Cone beam computed tomography (CBCT) is now the imaging modality of choice for many radiographic studies in the field of dentistry. It is on the threshold of the orthodontic specialty as a mainstream diagnostic modality, and its applications in orthodontics have been recognized.1-3

CBCT can produce a complete initial record as a digital data set for all orthodontic patients. It is capable of imaging hard tissue of the dental and maxillofacial region, and it produces images with isotropic submillimeter spatial resolution. CBCT has allowed an improved visualization of anatomy and pathology when compared to other diagnostic modalities in dentistry.

Some concerns have been raised by dentists regarding CBCT radiation dosage. Although several studies4-6 report that this dose is much smaller than traditional CT imaging methods, the controversy regarding increased radiation from CBCT and appropriate radiological guidelines is a pertinent issue that needs to be addressed by the profession. While we do not recommend using CBCT on every orthodontic patient, it seems that the diagnostic benefits that can be obtained from CBCT are substantial.

In most orthodontic cases, basic imaging such as panoramic, cephalometric, and periapical radiographs are sufficient adjunctive tools for diagnosis and/or confirmation of the clinical situation. On the other hand, there are reasons to use CBCT as an adjunct to imaging in orthodontic practice.7

To interpret CBCT images, one must examine the images in three dimensions: axial, coronal, and sagittal. 3D interpretations can be a challenging task. Most dental students do not get enough training in CBCT; therefore, most dentists are not comfortable interpreting those images. It should be emphasized that orthodontists, like all other clinicians, are responsible to report any occult pathology that might be encountered in the scan. Therefore, if an orthodontist is not qualified to read the scan, a referral to a radiologist should be considered.

CBCT interpretation requires data to be processed using computer software to provide multiplanar reformatted (MPR) images and 3D visual representations (such as maximum intensity projection, surface, and volume rendering). The layout of CBCT radiographs is usually presented on the computer screen where axial, coronal, and sagittal views can be studied. An example of a popular layout in Dolphin Imaging version 10 software is presented in Figure 1. Changing one view requires moving the line on one of the other views. Each view should have two lines. Moving one of those lines renders changing one of the other views. The process is intuitive and user-friendly in any software.

Volume rendering seems to be a popular tool widely used among orthodontists, especially for impacted canines. An example is presented in Figure 2. The volume rendering view is merely a picture that is presented on a 2D object (a computer screen), and is not satisfactory for scan interpretation. It can be compared to architectural rendering illustrations that provide an appealing view of the building from the outside but not the inside. Therefore, it is imperative to always go through the whole volume to avoid any false negatives associated with the volume rendering view. Going through axial slices first from the most inferior to the most superior slice is recommended. After that, the coronal and sagittal views can be viewed and interpreted.

What to Look For

Typically, orthodontists should be looking for the following patterns and findings:

Orthodontists should familiarize themselves with the normal appearance of the condyle head, mandibular fossa, and articular eminence. Any deviation from the normal should be reported, especially before orthodontic treatment is initiated. CBCT radiographic findings that may be encountered include interruption of the cortical bone of the condylar head, bifid condyle, flattening and/or remodeling of the condylar head, bifid condyle, osteophyte formation, lacunae formation, resorption and interruption of the articular eminence and/or mandibular fossa, erosion of anterior and/or posterior slopes of the condyle, and Ely’s cyst formation. The articular disk cannot be visualized in CBCT imaging. Figure 3 shows some examples of normal and abnormal TMJs.

The use of CBCT in orthodontics is increasing. The improved diagnostic information that a CBCT renders is only justifiable if conventional methods are not adequate and an appropriate risk to benefit analysis is done, but considerable research has confirmed its accuracy and numerous applications in orthodontics. A prudent orthodontist should familiarize himself or herself with normal appearances versus the appearances of pathology to maximize patients’ health care and the orthodontist’s risk management.

Ahmad Abdelkarim, DDS, MS, is an orthodontic resident at Jacksonville University School of Orthodontics and a board-certified oral and maxillofacial radiologist. He can be reached at

Dipak Chudasama, BDS, MSC, MORTH RCS, MBA, is an assistant professor and director of research at Jacksonville University, School of Orthodontics. He can be reached at 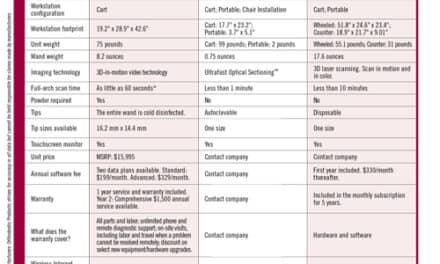