According to an article on aaomembers.org, Robert Merrill, DDS, chair of the AAO Council on Governmental Affairs (COGA), participated in a roundtable discussion on health care policy and the issues facing small health care providers with Democratic members of the US House Committee on Small Business on September 18. The AAO was one of 31 organizations represented.

Merrill, one of two doctors in attendance, said that the committee members "really paid great deference to my comments. I was able to say, ‘This is how it impacts my practice, my colleagues, my patients.’

"This was very important for us (the AAO). We (orthodontists) are now seen as key players whose opinions are thoughtful. Speaking as a doctor was valuable. All of this is the fruition of work by COGA, AAO staff, and legislative counsel.”

• How to ensure that Medicare and Medicaid payments cover actual costs and how to reduce paperwork burdens;

• the impact of insurance practices on small health care providers; and

The AAO, the ADA, and the American Association of Oral and Maxillofacial Surgeons represented the interests of dentistry during the roundtable. Merrill noted that the organizations’ presence increased the opportunity for dental issues to be discussed.

Merrill, who practices in East Wenatchee, Wash, emphasized the impact of inadequate Medicaid reimbursement on dentistry by providing data from the Washington State Dental Association.

"A few years ago, the Washington State Dental Association did an analysis of how much our 3,300 actively practicing members wrote off for uncompensated Medicaid dental treatment in a given year. The figure was in excess of $180 million. That is over $50,000 per dentist, and not all dentists participate in the Medicaid program, so the impact per participating dentist was actually higher. Dentists are willing to do their part, but they shouldn’t be expected to shoulder the burden alone," Merrill said at the roundtable.

He also discussed the impending reauthorization of the State Children’s Health Insurance Program and stressed the AAO’s position that limited resources be directed to where the need is greatest: necessary primary dental care for prevention, elimination of infection, and treatment of dental pain. "We need to cover those who are eligible already (at 200% of the federal poverty level) and fund them at an acceptable level before we even begin thinking about increasing eligibility criteria," he said. "The access problem in Washington, in many cases, is not due to insufficient dentists, but inadequate reimbursement."

When the discussion shifted to insurance practices, Merrill described the deleterious effects of nonduplication clauses in dental-benefit plans. Because of these clauses, married couples (or domestic partners) who have dual dental-benefit coverage do not always receive the full reimbursement to which they are entitled.

Following the 2-hour discussion, Dr Merrill conducted several meetings with legislative directors for the Republican members of the Committee on Small Business. "We are working with people on both sides so they can get to a common ground that is in the best interest of the patients," Merrill said. 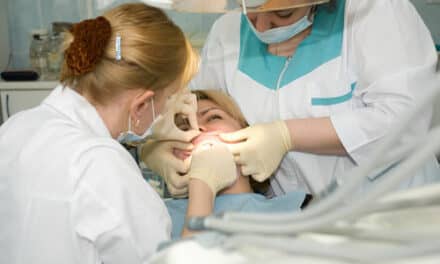 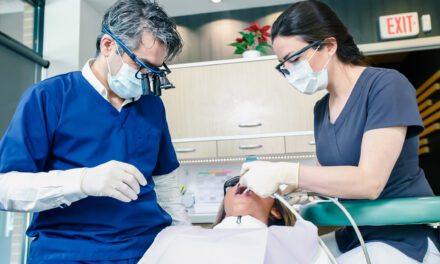