Barbara Walters and Lance Armstrong will be among the speakers at the ADA General Sessions, which will take place Friday and Saturday, September 28 and 29.

Friday’s General Session will begin with a black-and-white video chronicling the construction of the Golden Gate Bridge. Then, building on this year’s theme, "Discovering Golden Opportunities," the session will continue with a multimedia presentation about the allure of gold and a 50-person choir will welcome the audience to the Golden State. The introduction will wrap up with an exploration of the devastating effect of Hurricane Katrina on several dentists and how the ADA has helped them rebuild their lives and their practices.

Next, television journalist Barbara Walters will begin the 2007 Distinguished Speaker Series. A 25-year veteran of ABC News and now co-executive producer and host of the Emmy-winning talk show, The View, Walters is renowned for her insightful interviews of statesmen and stars.

Saturday’s General Session will include profiles of ADA dentists volunteering at the local, national, and international levels—and the positive effects on their patients’ oral health and themselves.

Next on stage will be Distinguished Speaker Lance Armstrong. Mr Armstrong is a seven-time winner of the Tour De France, a two-time Olympian, a humanitarian, and a cancer survivor.

The ADA Distinguished Speaker Series is sponsored by Johnson & Johnson Oral Health Products. The ADA General Sessions and Distinguished Speaker Series is free to registered attendees. The sessions will be held from 8:30–9:45 AM in Moscone West, Level 1. No ticket is required, but an ADA badge is required for entry. Seating is available on a first-come, first-served basis. Shuttle bus service to the convention center begins at 7 AM, and doors open at 7:45 AM. 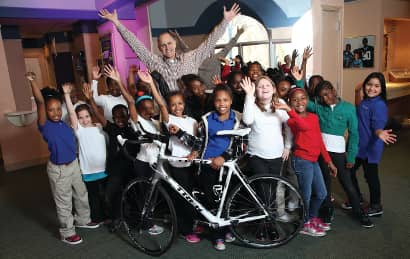 Riding for a Reason