A Work of Art 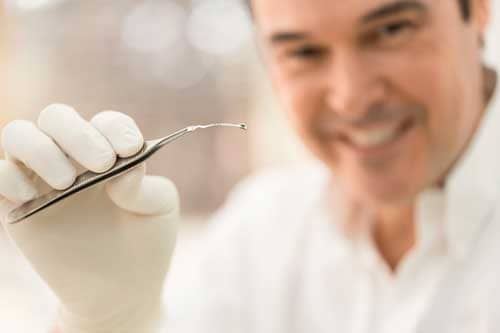 Most orthodontists probably have a smile they created that they would call a “work of art.” But how many orthodontists have had their work recognized as a piece of art? Barcelona-based Luis Carrière, DDS, MSD, PhD, would be one such orthodontist.

As the son of an orthodontist, Carrière has been immersed in orthodontics since childhood. He saw how his father José Carrière, DDS, MD, PhD, enjoyed the profession. He saw the passion his father had for the care of his patients. And simply, he says, “I wanted to be like him.” 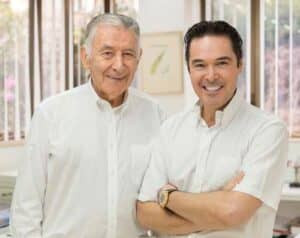 Carrière and his father, José Carrière, have worked side by side for the last 22 years at their Barcelona-based orthodontic clinic.

The elder Carrière opened the Clínica Carrière Ortodoncia in 1979 in one of Barcelona’s residential neighborhoods. The practice primarily operates out of three of the building’s five floors; the remaining two floors dedicated to providing space for lectures and research. While Luis Carrière’s career now takes him around the world to lecture on orthodontics, his interest in sharing what he knows and advancing the profession comes from his father who from the start conceived the Clínica Carrière Ortodoncia as a “meeting-point” for orthodontic professionals. As Carrière puts it, “[My father] is my biggest point of reference.”

While the Clínica Carrière Ortodoncia works exclusively in orthodontics, both Carrières value the role other professionals can bring to a patient’s final outcome. Always, the goal is the perfect finish for the patient. And for those patients who need a multidisciplinary approach, the clinic keeps the door open to welcome the best practitioners. 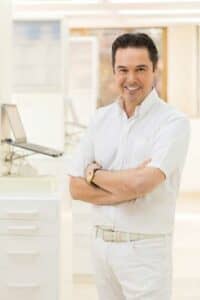 Today, Luis Carrière has made a name for himself within orthodontics as the creator of the Carrière® Motion™ Appliance. The Carrière Motion Appliance came to Carrière in a flash as he was working on a patient. Frustrated with the fact that he wasn’t working comfortably and that the patient also wasn’t comfortable, he saw an alternative. Carrière immediately took that spark of an idea and put it into soap—or more precisely, sculpted his vision out of a solid piece of soap before the idea slipped away. From there, he worked with a friend, a 3D imaging expert, to create a computer model. Using a million dollar 3D printer in the lab of the local university, they generated a stereolithographic print and a to-scale silicone mold, which Carrière then took to a local jeweler to manufacture the appliance in 22 karat gold. From there, it was time to see how his idea worked in practice in his clinic. Happy with the results he was seeing with his own patients, Carrière contacted ClassOne Orthodontics—today Henry Schein Orthodontics. In 2003, just 2 years after that flash of an idea and soap sculpture model, the Motion Appliance was on the market.

“I’ve always been curious, trying to simplify—almost obsessed,” says Carrière of his inventor spirit. “Whenever I see something that makes my work difficult, I try to see the possibilities for approaching the situation in a simpler manner. You have to have a capacity to visualize, to look at things in a different way. You must see problems from another perspective.”

Recognized for its aesthetic design, the Carrière Motion III is included in the permanent collection of the Barcelona Museum of Design.

Once the solution has been visualized, it’s on to design. And just as the perfect finish is important when it comes to his patients’ smiles, the perfect finish is important when it comes to the design of any product Carrière creates. Carrière believes in beauty in all things, and as a result, has has received a number of prestigious design awards, including the International Design Award Delta Gold ADI-FAD in 2009 for the Carrière Distalizer™ MB. But even more prestigious is the recognition the Carrière Motion III has received. Recognized for its aesthetic design, it is included in the permanent collection of the Museu del Disseny de Barcelona (the Barcelona Museum of Design).

“It’s interesting to see an orthodontic appliance among chairs, lamps, and motorcycles, with different things from throughout history,” says Carrière of the Motion III’s status as a piece of art.

Following on from his success with the Motion Appliance, Carrière created, as he calls it, “his next minimalist design”: the Carrière Passive Self-Ligating Bracket. The SLX™ bracket was designed to allow an orthodontist to work with minimal forces while achieving maximum efficiency. Not only does it cut treatment time, according to Carrière, but it also eliminates the need for unnecessary bends previously required toward the end of treatment.

With the SLX bracket, Carrière left the soap behind and started the design process with the full resources of Henry Schein Orthodontics at his disposal from the beginning. As Carrière puts it, “The engineers [at Henry Schein Orthodontics] work like a Swiss watch.” Everyone involved in the process makes a point of sweating the details to ensure a product that is accurate, efficient, and effective. “This is the sweetest moment of my life—to work in product development,” adds Carrière.

Today, Carrière’s focus is on an aesthetic version of the Motion Appliance and down the road an aesthetic bracket.

Luis Carrière fiercely advocates the importance of a perfect finish for the patient. Yes, there should be great function—a good occlusion that promotes and maintains both good oral and overall health, but there should also be a beautiful outcome.

“Orthodontics is mainly a dental specialty—we straighten teeth and place a good occlusion; but it is also skeletal because we balance the relationship between the mandible and maxilla,” Carrière says before coming to his main point. “Orthodontics is a facial specialty. We are responsible for creating a beautiful face for the patient. We can ruin a face without correct treatment. It is the only specialty in which we are able to move the natural tissues of the patient to balance the face—to balance the relationship between nose, upper lip, lower lip, and chin.”

To ensure the perfect facial balance, Carrière employs soft-tissue lasers to create a nice finish of the gum profile and dermofillers for lip recontouring (paying special attention to maintain the look of natural lips). The clinic also provides teeth bleaching where needed. In Carrière’s opinion, anyone looking for facial improvement should visit an orthodontist first, before any type of aesthetic surgeon.

But beyond aesthetics, Carrière points out that this specialty can also have a huge impact on the psychology of a patient.

“We enhance the patient’s self-confidence. With a better face, we can enhance not only the patient’s self-confidence but also how well they deal with problems,” he says. “We are responsible for a human being’s happiness. It’s not just appliances. We are responsible for the face and the happiness of the patient.” Carrière hopes that all orthodontists understand that responsibility and he’s heartened by the fact that many of the orthodontists that he works with or lectures to around the world seem to share that sense of responsibility.

Lecturing has taken Carrière from the United States, Russia, and the rest of Europe to Japan and the Middle East. He admits it’s a little crazy and can be tough, but he relishes the opportunity to share his philosophy on maximizing facial aesthetics while achieving superior occlusal outcomes. Chief among the points he makes is that there are alternatives to extractions.

“We can’t risk creating a non-beautiful facial outcome. Behind the facial outcome is a human being who has to be happy and self-confident. Extractions can ruin the face,” Carrière says, adding that no patient should have to shoulder the burden of a failed outcome. “It’s no longer acceptable to say we do extractions because that’s the way we treat.”

“We are facing a new type of patient—young patients who want the latest treatment,” says Carrière, who has now been in practice for 22 years. As he puts it, these are patients who when looking at an iPhone 5 see a piece of obsolete technology They want and think they need the iPhone 6S. They want the latest and greatest in their consumer goods and in their orthodontic treatment. If an orthodontist proposes headgear or visually obtrusive appliances, this type of patient will balk. Neither will this patient accept a long treatment time. Weeks, if not months, have to be shaved off the time a patient is expected to wear brackets. And when it comes to discomfort or pain, this patient won’t put up with it. It’s for these patients that the Motion Appliance and SLX bracket were designed, says Carrière.

“These patients require a level of treatment that is fast and comfortable. It has to have a beautiful outcome and has to accomplish what was promised,” says Carrière.

Carrière confesses he’s a super fan of the United States, when explaining why he chose to partner with an American company on the Motion Appliance. “I like the way things are approached in the [United States],” he says. “I always like to say, ‘America is growing so much because it does things that have not been done before.’ And they aren’t afraid of doing that. My way of doing things is the same. When I see a problem, I’m not afraid of going forward and trying to solve the situation. The [United States] has been the place for medical evolution—always trying to be one step ahead.”

Today, Carrière contends that the American way of thinking is global and it has had an incredible impact on the evolution of orthodontics.

“I have traveled to many different countries. There are no differences in techniques, offices, standards of care, protocols. There is a high level of care,” he says. “Everything is standardized. There are similarities everywhere.”

And just as orthodontists in the United States embrace intraoral scanners, smaller profile and low-dose CT scanners, and 3D printers as the must-have technological advancements for their practices, the Clínica Carrière Ortodoncia in Barcelona does the same. Carrière will be adding the 3Shape TRIOS® intraoral scanner and the i-CAT® FLX from Imaging Sciences International to the clinic. For now, he is waiting on a 3D printer, watching to see how the technology develops and refines.

Carrière admits that his schedule leaves little free time, but he wouldn’t have it any other way. His passion is helping patients and his colleagues, and contributing to the orthodontic community overall. As he puts it, once his appliances are out in the world, in his colleagues’ hands or in a patient’s mouth, they are no longer his. They are the community’s.

“When colleagues come to me and say they and their patients love it, that is my biggest thing. Then, I am happy.” OP

Alison Werner is chief editor for Orthodontic Products. She can be reached at [email protected]. 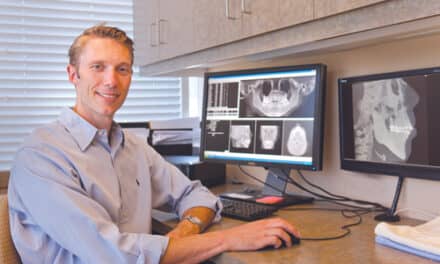 It Takes One to Know One 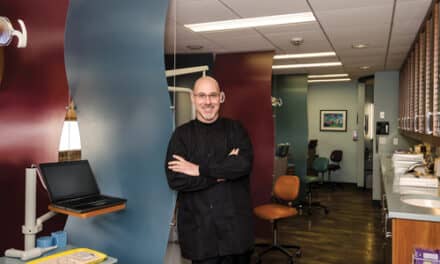 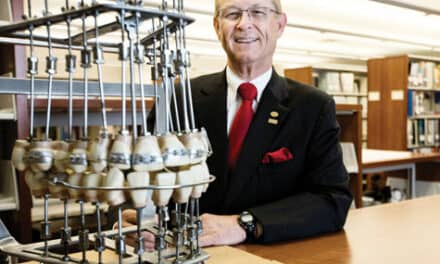