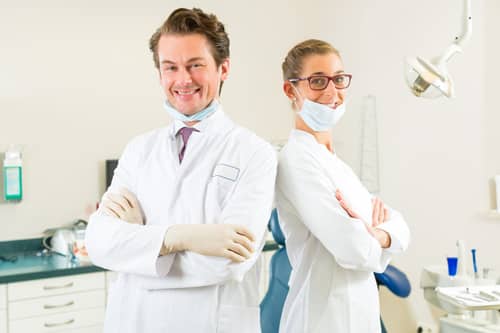 Over the last 4 years, our annual survey has received more than 1,600 responses from residents about their plans after completing their residency programs. The survey gives us insight into some of the major issues facing residents today, from income expectations to debt burden to the type of employment opportunities they are looking for upon graduation. While this article will only highlight some of the survey’s findings, it paints a picture of an industry that is definitely changing.

Ready to Own a Practice?

Becoming a CEO doesn’t typically happen overnight; one normally spends years working their way up through the ranks, rising to the top thanks to a combination of hard work, perseverance, and honing his/her leadership traits and qualities. However, this isn’t quite the path of today’s orthodontists. Orthodontists do spend years perfecting their craft of straightening teeth; however, their “business leader” skills may not be as developed and as strong as someone who has spent years in the business world learning everything from delegation and management skills to financial planning.

If a young doctor enters private practice shortly after the completion of his/her orthodontic program, becoming a CEO is an immediate occurrence. The doctor will be in charge of running a business, delegating work duties, managing employees, conducting daily operations, solving problems, and, basically, being a business leader. It is important that a doctor knows how to operate his or her practice efficiently and effectively in order to have and maintain a thriving practice. We were curious to find out how residents rank their residency program on the preparedness with the business aspects of owning a practice. 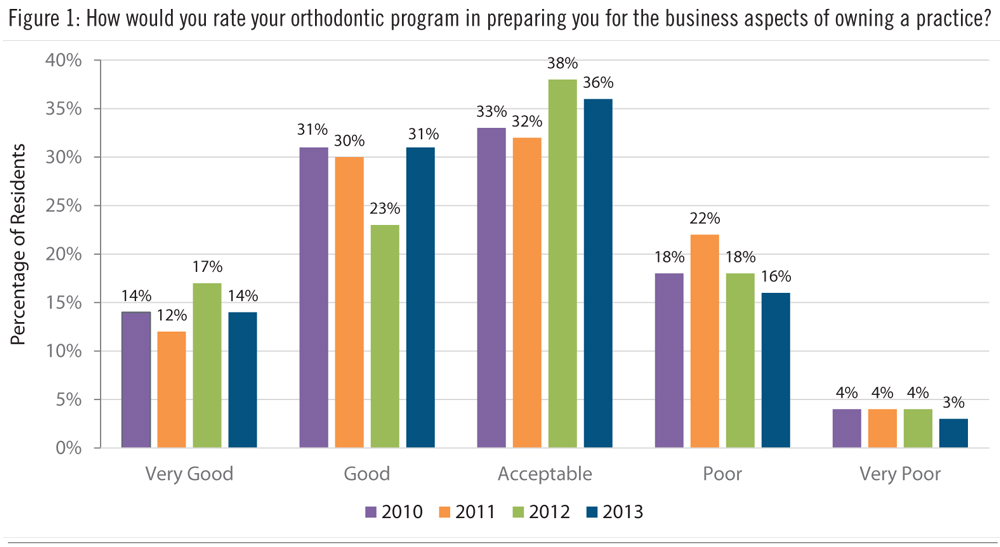 The results of this year’s survey (Figure 1) indicate that more than four-fifths of residents believe that their programs did an acceptable (36%), good (31%), or very good (14%) job of preparing them for the business aspects of owning a practice. This, however, leaves 19% of the respondents ranking their programs as poor (16%) or very poor (3%) in preparing them. When comparing this year’s data to last, we see that there is an eight-percentage-point increase in residents who rate their programs as good.

This question was left open for comments in order to understand the resident’s ranking method. Some of the resident responses received included:

“There is little to no business training.”
“Our program provides no instruction on this subject and resists any efforts to attend conferences in which this is discussed.”
“I just started this program, so I have not yet been taught business aspects, but I know they are in the curriculum.”
“Provides great opportunities to learn, but must take initiative.”

If residents do not feel they are receiving enough education from within his/her program, chances are good that they will be seeking outside sources of information, and the American Association of Orthodontists (AAO) is the perfect place for them to turn. The AAO recently rolled out a resident-targeted educational program focused on communicating with this demographic group. It includes an abundance of outreach, including electronic communication, social media, lecture access, subscriptions to association publications, and specially developed programs for younger orthodontists.

Based on the 19% resident response in the poor and very poor categories, the AAO’s focus on these new educational outlets and opportunities can easily be justified. The more knowledge available to residents, regardless of its originating source, increases the odds of future success. With this new initiative serving this demographic, it will be interesting if residency programs will embrace and incorporate these outreach opportunities, ultimately leading to higher rankings in the preparedness of the business aspects of practice ownership. 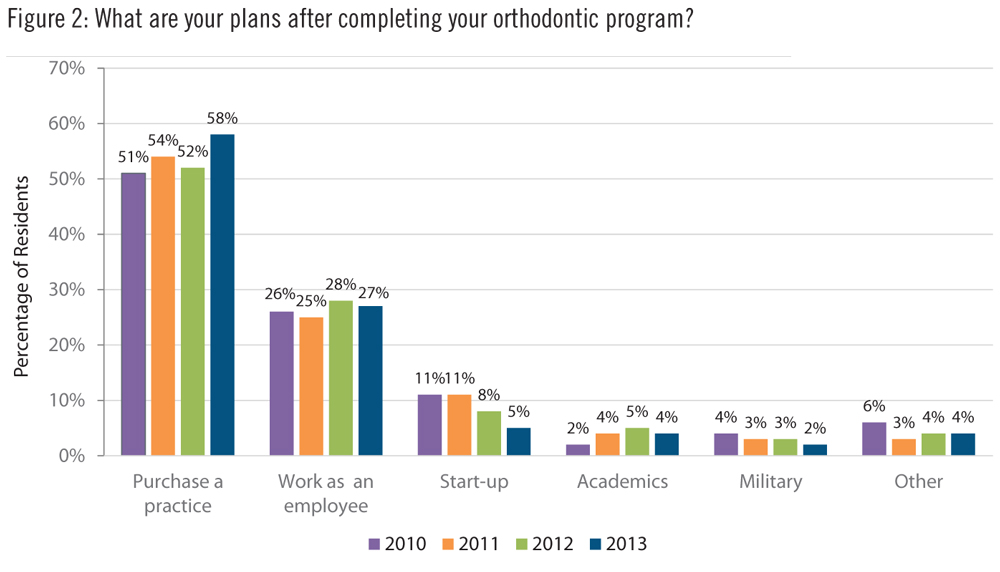 This year’s survey data (Figure 2) reveals that more than half (58%) of residents are planning to purchase an established orthodontic practice after completion of their program. This is an increase of six percentage points from last year. There is less interest by residents in all other response categories, which includes working as an employee (27%), starting up a practice (5%), going into the academic field (4%), and entering the military (2%). The remaining 4% noted their plans within the survey. Some of the resident responses combined two or more of the available survey responses, while others were outside of the “typical” residents’ plans. Some of the responses included:

The odds are favorable that anticipated plans may change as residents reach the completion of their program. Some of the most common factors that modify residents’ decisions are input from a spouse, family ties, educational debt, and the amount of income needed to sustain a post-residency lifestyle.

Got Something in Mind?

One of the most important questions is whether a resident can locate a practice to purchase or not. According to our survey (Figure 3), only 20% of current residents who plan to purchase an orthodontic practice have definitely located an opportunity, while only 13% of residents report that they are almost certain they have located a practice. These respondents are typically toward the end of their program or in the first stage of contact with a practice that may result in a commitment to purchase or an employment arrangement. 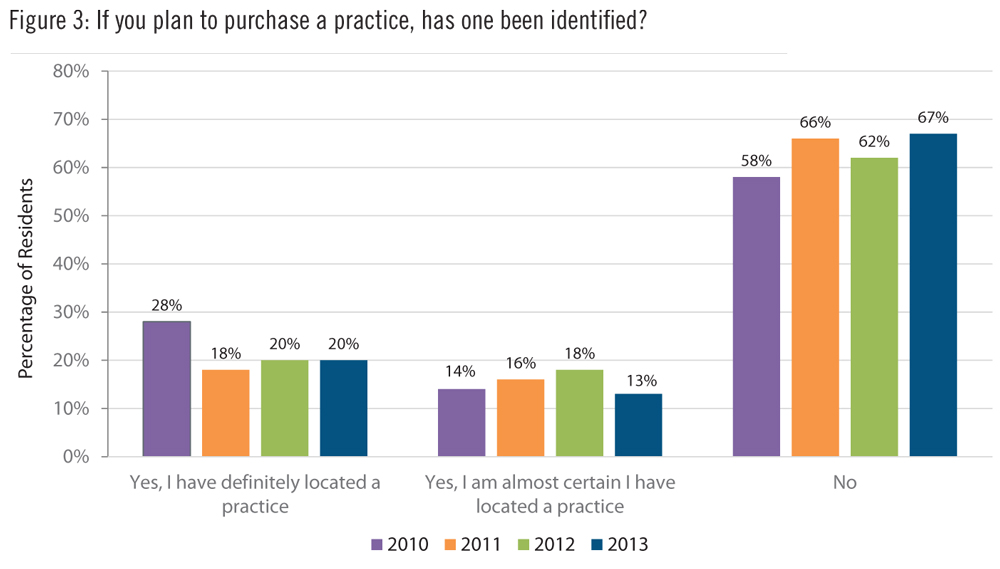 When analyzing the residents who indicated they have located a practice opportunity, many have a family member who is a practicing orthodontist. This does not necessarily mean that the resident will be practicing with that particular family member, but having a personal connection within the orthodontic community sometimes makes the practice search less difficult.

The inventory of available practices opportunities has been increasing the past few years. To put things into perspective, the AAO’s Practice Opportunity Database reported a ratio of 2.4:1 seekers to opportunities as of February 2014. When looking back at data from previous years, 2009 data shows a ratio between 5:1 or 6:1 seekers to opportunities; while October 2010 shows the ratio decreased roughly to 4:1, and again dropped to 3:1 toward the end of 2011.

This ratio of seekers to opportunities has closely correlated with the recession trend and is good news for today’s residents seeking established practices. We continue to encourage residents to begin seeking opportunities early in their program and to expand their geographic areas of consideration. Having a practice opportunity locked in 6 months before graduation will generally leave plenty of time to finalize the appropriate agreements.

Income is one of the most compelling factors for individuals deciding on a career path or a location to live. According to Forbes magazine’s 2013 Best Paying Jobs in America, orthodontists have the sixth highest-paying job in America. Similarly, the most recent Bureau of Labor Statistics’ National Occupational Employment and Wage Estimates data reports that orthodontists have the fifth highest-paying job in America. 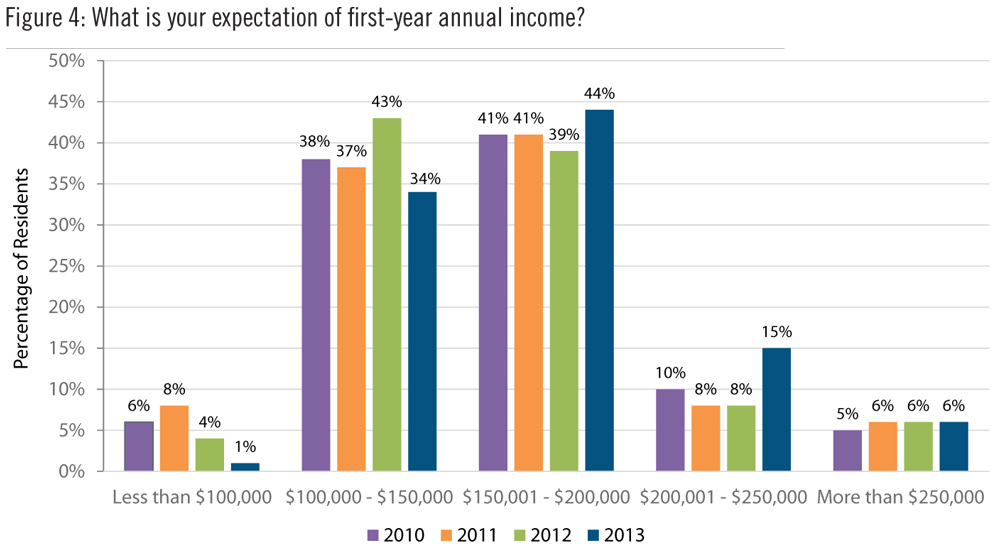 The residents’ anticipated annual income has increased in this year’s survey. The largest increase was seven percentage points in the $200,001 to $250,000 income expectation category. On the other hand, income expectation levels between $100,000 and $150,000 decreased nine percentage points. Overall, the majority of residents (93%) anticipate an income level between $100,000 and $250,000 their first year in the industry. 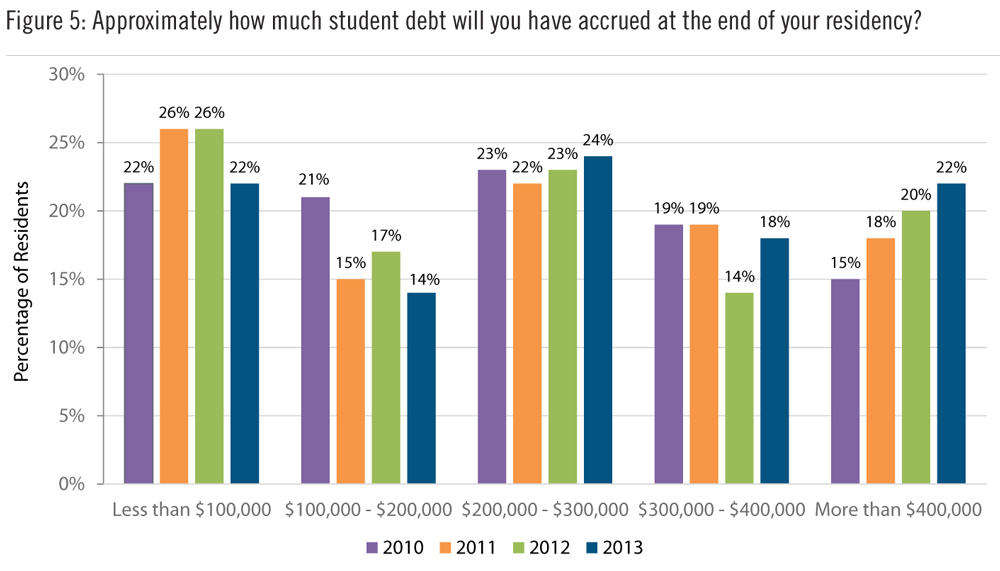 So How Much Debt?

Student debt levels appear to be increasing, with the number of residents reporting an estimated debt of more than $400,000 ticking higher in this year’s survey. The largest increase in this year’s survey was the increase of four percentage points in residents with debt between $300,000 and $400,000. Residents with student debt less than $200,000 decreased a total of seven percentage points this year, which confirms the overall higher debt amount levels.

The data collected here allows today’s practice owners to understand their future colleagues, their plans, and their potential effect on the orthodontic market. Knowing and understanding the mind-set of today’s residents is crucial to predicting future trends within the orthodontic industry. After all, the decisions of the resident base will have a great impact and ultimately affect the industry for years to come.

Bentson Clark & Copple’s 2013 survey results ?are based on 418 valid survey resident responses (approximately 36.3% of the resident population) that were distributed to the entire orthodontic resident population of 1,151 individuals in the United States, Canada, and Puerto Rico. The survey invitations were distributed through email. The survey was also conducted on-site during the Graduate Orthodontic Resident Program (GORP), hosted by the University of North Carolina at Chapel Hill in August 2013. The summarized results in this article were completed from July 15 through September 18, 2013. SurveyMonkey.com, an industry-wide accepted web-based survey solution, was utilized to conduct the survey. The survey consisted of 18 questions: 17 multiple-choice questions and one open-ended question.

This article provides only a small sampling of the data gathered in the 2013 Annual Resident Survey. Contact Bentson Clark & Copple at (800) 621-4664 to read the entire 18-question survey. OP 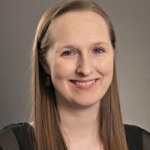 Laura Overcash serves as director of marketing at Bentson Clark & Copple LLC. Laura handles the company’s advertising campaigns, public relations, and branding. She coordinates the details of all trade show events, speaking engagements, lectures, webinars, and oversees all aspects of Bentson Clark & Copple’s annual resident survey. Laura is also the publication manager of the Bentson Clark reSource. She develops and oversees the publication’s content each quarter. She can be reached at [email protected] 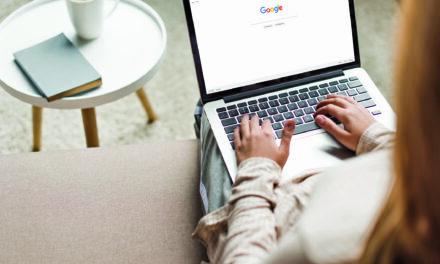