How joining the military helped me find adventure, a job, and a husband 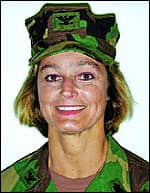 When I was in dental school at Medical College of Virginia, I had a retired Army General instructor who taught prosthetics. His name was “Pinky” Smith. I think he could tell that I was the adventurous type, because we would often talk about motorcycles, hiking, and generally “getting dirty.” He asked me what I was going to do after graduation, and I told him that I wanted to go to orthodontic school. He then told me that if I went into the military, I would get some good skills and have the ability to travel, and then I would be better able to choose a specialty. I didn’t think much about what he said, and I applied to nine orthodontic programs. I got interviews at five of them but ended up with only one alternate spot.

I applied for a ground penetrating radar spot with the Army and got one at Fort Bragg, NC, in 1984. After that year, I wassent to Giessen, West Germany, for 2 years. There were a lot of orthodontic supplies there, so I moved everyone’s teeth the wrong way, and everyone just loved it because they though they were getting a valuable service for nothing.

When I returned to the States, I got off active duty but remained in the Army Reserves to make some money while I went to orthodontic residency at Temple University at my own expense. I tried to apply while on active duty, but I was told, “No woman has ever been trained for that, and you won’t be the first.”

When I decided to move to California and take the Board exam there, a retired Navy Admiral at Temple told me that he would help me pass the Board by introducing me to some naval officers in Long Beach who had just recently passed the Board. I went there for 5 weeks to practice and obtain patients for the Board.

I was assigned to CDR Ron Widlak to do anything he could do to help me get ready for the Board. He called up the local aircraft carrier and asked all the patients who had perfect Board lesions to come over to the clinic. Needless to say, I was ready for the Boards 3 days into my 5-week stay. I was pretty impressed with the Navy commander, because he really got things done and he knew everything about the Navy. We started dating the next week. When I went back home, he told me that he was being transferred to Virginia Beach, Va. Since that was where I had always wanted to practice (being a Virginia resident), it seemed verysynchronous that I met this great guy who was going to live near my dream practice destination.

After I passed the Board exam, Ron asked me if I would join the Navy so we could be together. I did, and spent 6 years at Portsmouth Naval Hospital and Norfolk Naval Base.

We got married, and we both went to Yokosuka, Japan, for 3 years. We traveled extensively there. I could have retired with 22 years already, but I just love to travel around, and I constantly run into Navy people who either know me or friends of mine. When I go for 2 weeks’ training every year, it is just like a family reunion. You meet a lot of people who are genuinely willing to do what it takes to protect and support this great country.

A few years ago I volunteered through the Navy and Operation Smile to go to Nicaragua, Colombia, and Honduras to help correct cleft palates. It was a natural for me, because I didn’t mind “camping out.” I switched to the Navy Reserves in 1999 when I worked as an associate professor at the University of Oklahoma. My past cleft palate experience interested me so much that I got involved with Kevin Smith, DDS, who was a gifted oral surgeon who nearly limited his practice to craniofacial disorders. I learned so much that I continued to study the area, and I teach it now at Jacksonville University School of Orthodontics.

While in the Navy and stateside, orthodontists would historically set up orthognathic surgery cases for the benefit of experience for the Navy oral surgeons. We treated hundreds of cases, and it became my specialty area. The Navy’s surgical experience was invaluable to me when I entered academia, because few orthodontists get this experience. I passed my specialty Board easily because of this. I could have never gotten this experience in the civilian sector.

Overseas, the Navy orthodontists were tasked with treating children, which rounded out my overall experience. If I had it to do all over again, I would have done it the very same way. The world travel, adventure, excitement, and phenomenal camaraderie is something you can’t get anywhere else. I feel that the Navy was responsible for my fantastic life education and experience, and I am forever indebted to them.

Orthodontists don’t generally go to combat, but I am in a Seabee Unit (construction battalion) presently, and if we get called up, it will likely be to Iraq or Kuwait. The way I look at it is, it would be just a little payback for the great 22 years I have had with the Navy.

Amy Counts, DDS, is a professor at Jacksonville University School of Orthodontics and a Captain in the US Naval Reserve Dental Corps. She can be reached at [email protected]