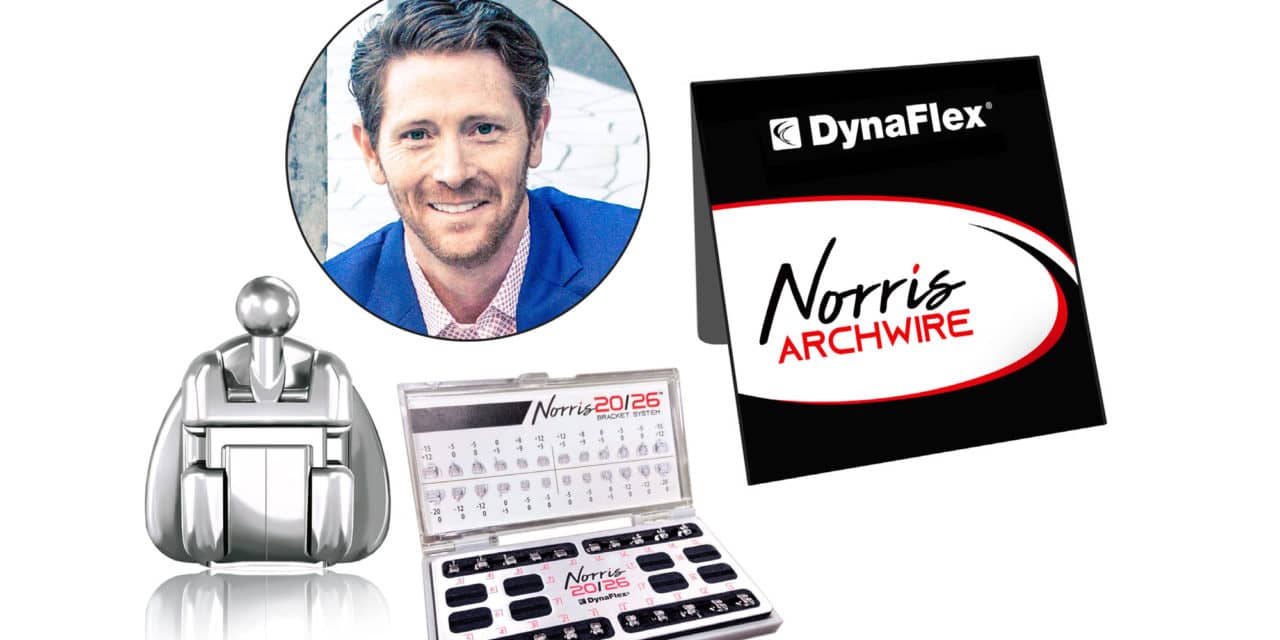 Norris used his decades of experience in treating with leading passive self-ligating systems, along with his background in mechanical engineering, to identify both the advantages as well as the clinical shortcomings of competing self-ligating brackets. This helped determine which design elements would most benefit today’s practicing orthodontist.

The result is a twin, passive self-ligating appliance system using a reduced slot dimension of .020 x .026, combined with an uncomplicated mechanism, and simplified wire sequence of extra broad arch form wires, according to DynaFlex.

With this system, Norris and DynaFlex also worked to reduce the learning curve that was characteristic of previous self-ligating systems. According to DynaFlex, previous systems have tried to compensate for control of torque, tip, rotation in various ways over the years. These systems use reduced friction, and free-sliding movement which is unable to utilize a ligation method that, at the very least, seats a wire firmly in place. This leaves many orthodontists struggling with control and finishing.

To achieve superior arch development and fully expressed smiles, research has shown low forces and less friction are the obvious routes to take. It was critical to employ the free-sliding mechanics of passive self-ligation while reducing the learning curve.

DynaFlex sees this as an easy to adopt option not only for passive self-ligating users, but twin users and active self-ligating users as well. The Norris 20/26 Bracket System provides not only more control with reduced slot dimension, but it also incorporates best-in class features, including: four true tie-wings with undercuts that can accommodate ligature ties and elastic chain; cobalt-chromium composition for nickel-free use by allergy-sensitive patients; a door mechanism with “glided” opening and closing; universal bicuspid hooks for reduced inventory; and a mechanical base for trouble-free bonding.

DynaFlex CEO and owner Darren Buddemeyer said, “Now more than ever, orthodontists see the need for efficiency, streamlined workflow and to minimize in-office patient interaction. I am genuinely excited to have the opportunity to work with a great clinician like Dr Norris to develop a Bracket System that meets these needs.”

The Norris 20/26 Bracket System also includes the Norris Extra Broad archwires. These archwires reportedly take what the company knows about expanded arches and aesthetic expression to a whole new level. Once again, Norris learned from observation, trial and error, and synthesized his experiences from the use of existing broad arch forms to create one that is extra broad. According to DynaFlex, a non-coordinated arch makes it possible to treat both the upper and lower with the same form. This extra broad arch is reportedly 30% broader than the broadest arch on the market, which allows it to achieve a number of key efficiencies and effects: it affords maximum space as it expresses each tooth to its full outer-most potential; teeth have a greater range of motion, making leveling and aligning easier than before; and it reduces dark posterior buccal corridors.

Because of the reduced slot and additional control, most cases can reportedly be treated with as little as four wires, minimizing the learning curve and inventory needs even further, according to the company.

During the later working and finishing stages of treatment, a DynaFlex exclusive “Rounded Rectangular” (19×25) archwire is introduced that is designed to make insertion, clip closure, and seating smoother than ever. As the company puts it, Norris Extra Broad Archwires are the perfect complement in how they fully express the torque and tip of the bracket over existing passive systems, without the binding of other higher frictional systems.

In conjunction with the release of this passive self-ligating system, DynaFlex has developed an online educational platform. The informational web page—dynaflex.com/norris2026—features videos, tips and tricks, wire and elastic intervals, bracket positioning tips, access to a doctor Facebook group and announcements of upcoming CE accredited webinars and in-office courses.

In addition to the online support, DynaFlex’s outside territory managers, inside support team, and leadership are available to provide customer service and training.

Tools of the Trade