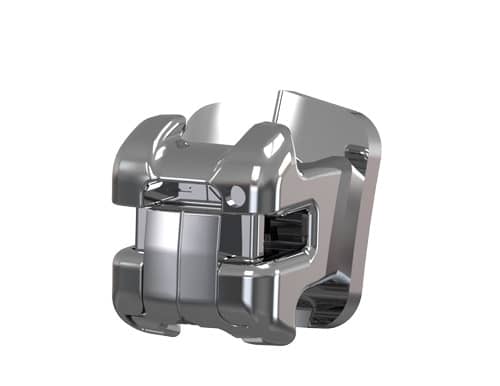 Nine years after Ormco Corp, Orange, Calif, unveiled the Damon™ Q bracket, orthodontists finally have the answer to what’s next: the Damon™ Q2 (DQ2). The DQ2 is the newest addition to the Damon™ System and this passive self-ligating bracket, when compared to the Damon Q, features two times the rotational control and more space under the tie-wing.

These features are what most excite Mesa, Ariz-based orthodontist Stuart Frost, DDS. “Whenever you have a passive self-ligating bracket, one of the issues you fight is rotational control, and with the new DQ2, we have about two times better rotational control than we had with the Damon Q. In my mind, that’s what’s so exciting,” he says. “Number two, we have more under the tie-wing space than we’ve had before, which makes it easier on assistants and doctors when putting power chains underneath the wire or when working with other auxiliaries. We now have all this extra space under the tie-wing.”

The DQ2 also features a rhomboid-shaped pad and new vertical scribe line on the door to guide bracket placement. Designed to provide improved patient comfort and aesthetics during orthodontic treatment, the DQ2 has a small profile and size with smooth, rounded corners. In addition, a drop-in hook (available in Q4 2018) is included to provide improved bending strength and durability with Ormco elastics and auxiliaries.

All these features combine to create a bracket with tighter tolerance than any of the company’s previous brackets, according to Frost. And this tighter tolerance means better control and more confidence when it comes to finishing.

“That’s what doctors are looking for. A bracket that allows for more control in finishing is what is really exciting,” says Frost, who, with a group of other orthodontists, met with Ormco’s engineers early in DQ2’s development to discuss their wish list for a bracket that provided faster finishes and better results.

“The Damon Q2 doesn’t change how I treat my patients. What it does is allow me to use the same mechanics that I’ve been using but with more control, better finishes, and less time in treatment.” Case in point: An open bite, crossbite case with mild to moderate crowding.

“What has been different with this bracket is that I’m seeing the teeth move more efficiently with the same protocols and same wires—and that’s because of the increased rotational control and the increased tolerance, the tightening up of the tolerance,” says Frost who started using DQ2 in January and has since placed over 200 cases. “Now, I’m in my finishing wire on these cases at about 5 to 6 months into treatment, and I can now spend the next 4 to 5 months finishing the case like a simple Class I mild to moderate crowding in less than a year. [The DQ2] allows us to get to that point where we put in our finishing wires a month or 2 months sooner than before.

“That’s really key here. With the new enhancements to the DQ2 bracket, I don’t have to see the patient as many times and I still have the case under control at the end. So, better control, better results.”

“The DQ2 is the smallest bracket without losing tooth control, and it’s the most comfortable and best-looking bracket. As orthodontists, we’re looking at all aspects, including how a bracket looks on the tooth,” says Frost, who started using the Damon System in 2000, and uses the DQ2 in conjunction with the Damon Q and Damon Clear brackets if needed.

According to a press release from the company, the DQ2 provides a modified prescription for upper, central, and lateral standard torque brackets.

“I love the new standard torque difference between the upper 1’s and 2’s, which gives me beautiful incisor alignment,” says Frost. “With high, low, and standard torques available, it really gives the doctor the ability to pick variable torques for each individual tooth according to what it needs.”

DQ2 is available in the United States, Canada, Australia, Japan, and select markets in Europe and the Middle East. OP