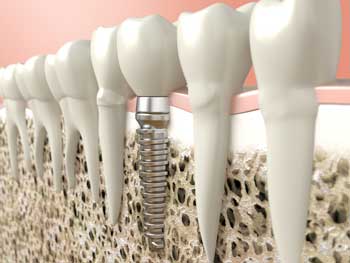 Researchers from McGill University have discovered that people who take the most common antidepressants—such as Celexa, Paxil, Lexapro, Prozac, and Zoloft, the Selective Serotonin Reuptake Inhibitors or SSRIs—are twice as likely to have dental implants fail as those who are not taking SSRIs.

“Because antidepressants, which are widely used around the world, are reported to increase the risk of bone fracture and reduce bone formation, we were curious to see how they might affect dental implants,” says Faleh Tamimi, BDS, MSc, PhD, the lead author on the study and a professor in McGill’s School of Dentistry. “Even so, we were surprised to discover that the negative effect of SSRIs on dental implants was so strong, almost equal to that of smoking, a well-established hazard for oral health.”

The researchers looked at records of dental implants done over a 6-year period, between 2007 and 2013, in a clinic in New Brunswick, Canada. Follow-ups took place with the patients between 3 and 67 months after the implant was done to see whether it had been successful.

A total of 490 patient records were examined. Among the population, 439 were not taking SSRIs. This group had a total of 822 implants. Of these, 784 were successful and 38 were listed as failures. Among the 51 patients who were taking SSRIs, there were 94 implants, with 84 listed as successful and 10 as failures. Non-SSRI patients had an implant failure rate (as a percentage of total number of implants done) of 4.62%. Patients taking SSRIs had a 10.64% failure rate.

“Unfortunately, because this study was based on data collected after the implants had been done rather than through interviews with incoming patients, it is impossible right now to determine the kind of SSRI dosage that could have this effect,” says Tamimi. “But what this study tells us is both that further work needs to be done in the field and that whether they are planning to have dental implants or hip or knee prostheses, SSRI users should consult their physicians and plan carefully to ensure that the surgical treatment is successful.”

The findings appear in the Journal of Dental Research.