At what age should the orthodontist examine a young patient? The AAO suggests that every child have an orthodontic exam by age 7. Should some patients be examined for hidden problems at an earlier age? If so, what would one look for, and what treatment or advice could be offered?

We all know that it is appropriate to treat a posterior crossbite or a skeletal Class III in the primary or early mixed dentition. But, how many times have you examined a young patient after the eruption of the permanent incisors and found the teeth severely crowded? Ever wondered if there was an alternative, or did you just start drooling at the parent’s anxiety over the appearance of these new large teeth? The superdontist can now save your child. (Just kidding.)

The typical 5-year-old with the perfect primary-tooth smile (no anterior spacing) is probably going to have anterior crowding by the time the permanent incisors erupt. We all know that if spacing is not apparent between the primary incisors, and if normal dental facial growth is not adequate, when we finally examine the child at age 7 the permanent incisors will be severely crowded, with ectopic eruption and maybe lack of gingival attachment. Could this be avoided by early diagnosis and timely advice? What tools would you need to properly diagnose the mouth at this age? What advice could you give to minimize or avoid anterior eruption problems?

A 7-year, 9-month-old patient presented with no complaints other than that the pediatric dentist was concerned about the lack of permanent tooth eruption.

In my practice, we sometimes see a 7- or 8-year-old with straight incisors with blocked-out cuspids, while others have blocked-out incisors with room for cuspids. What happened to create this difference? Is one more desirable than the other? These are questions that I have asked myself and, with your permission, I am prepared to render my thoughts.

I have been an orthodontist for more than 40 years and have become very adept at identifying normal and abnormal conditions in a panoramic x-ray. Granted, I have missed some things over the years because of my inexperience, being in a hurry, not being able to clearly see structures, and poor films. It was the best tool I had, and it was the best I could offer at the age at which the patient presented. I assumed that anterior crowding was inevitable and unavoidable. I could not see what was going on.

University orthodontic programs and private orthodontic practices then and even now do not routinely examine 4- to 6-year-olds, but rather we suggest that the pediatric dentist wait to refer, except in cases of orthopedic problems (such as posterior crossbite or Class III). Many orthodontists and staff are uncomfortable dealing with patients this age.

Anterior front and bottom views of the upper arch.

Today, we have the ability to see what we want to see and to assure the parent that there is nothing that can be done to avoid or minimize problems. But we must see the patient early enough, and we must have a good view of the unerupted teeth to make accurate assumptions about the eruption pattern. The panorex is still my primary tool for giving a patient at any age an orthodontic examination. But now that I have a limited-field CBCT (Kodak 9000C), I have the ability to see more clearly what is happening and to learn from it. And the Kodak 9000 creates less exposure than a panoramic x-ray.

Serious dental problems that develop at an early age can be avoided through proper diagnosis and advice. Nonskeletal anterior crossbites of incisors can be avoided by early diagnosis and timely removal of primary teeth. This must be done far in advance of the actual eruption of incisors to avoid crossbites, lingually positioned lateral incisors, and gingival defects.1

I don’t have the evidence, but I feel that many cases of permanent cuspid impaction could be avoided if we paid attention to where these teeth were at an earlier age. It is apparent that the primary cuspid root and the erupting first bicuspid can deflect the permanent cuspid toward the lingual or mesial, causing impaction and/or root resorption. Maxillary and mandibular alveolar arches can be expanded to accommodate more tooth follicle development if treatment is started early.

I suggest that all 4-year-olds be examined by an orthodontist, especially if there is no space developing between the primary incisors. I suggest that a limited-field CBCT be taken in these cases to be able to accurately view the positions of crowded unerupted incisors and cuspids. Accurate early diagnosis of a developing malocclusion can mean savings in time and expense to the parent and a better outcome of treatment.

Intervention in the primary dentition can give a patient straight permanent front teeth at an early age. It can also minimize impactions, ectopic eruption, gingival defects, and root resorption.

A 7-year, 9-month-old patient presented to our office with no complaints other than that the pediatric dentist was concerned about the lack of permanent tooth eruption as shown in the panoramic x-ray. This patient’s dental age is probably 6 years, so we will assume that this is not uncommon to see at an earlier age. Should the patient be placed on recall to allow the primary teeth to exfoliate on their own?

To see a video of Pickron’s review ofthe CBCT in this case, go youtube.com.

I don’t think I have to show typical cases of crowded anterior teeth to show what would happen if this case were left to its own. My recommendations were to immediately remove the primary lateral incisors and primary cuspids. As soon as the central incisors partially erupt, I will recommend the extraction of the primary first molars and maybe some permanent bicuspids to allow the cuspids to shift distally as they attempt to erupt.

Using a combination of low-dose, limited-field CBCT with your panoramic x-ray and seeing the patient earlier will result in better treatments and better outcomes. This can only happen if we ask for the opportunity to examine this age group. Everyone will benefit, and your pediatric dental colleagues will certainly see you differently.

Robert N. Pickron, DDS, is in private practice in Atlanta. He can be reached at

ADA: Chairside Screenings for Chronic Diseases Could Save Millions 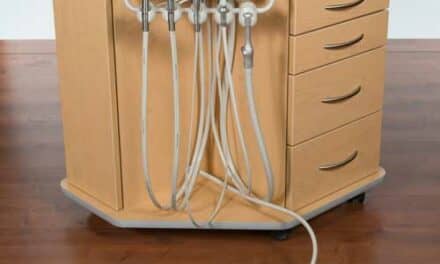 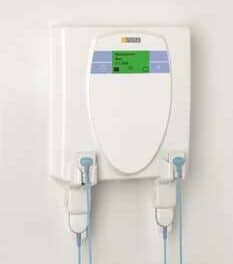