Dane Robinson, DDS, in Tempe, Ariz, has invented “Impact,” a toothbrush that he believes will last 2 to 3 years or more without having to be replaced. Robinson also believes his toothbrush will clean better than traditional toothbrushes because its bristles will remain in their original form instead of spreading out, so they can fit into smaller spaces between teeth and gums.

According to Robinson, the problem with traditional toothbrushes is that the nylon bristles bend down and the tips are not able to get between the teeth. So about 6 years ago, he began working on new types of bristles that include a small amount of titanium to enable the bristles to retain their original shape.

Wayne Wozniak, DDS, with the ADA’s Council on Scientific Affairs in Chicago, is concerned with the new type of bristle, how well it cleans, and how abrasive it is.

“Nylon just has a good history of being a good material that cleans well and is not too abrasive,” says Wozniak.

Robinson says he is well aware of the potential concerns and has already adjusted the bristles after testing their abrasiveness. Even though they have titanium in them, he said the bristles are soft and safe.

If the toothbrush gets FDA approval, Robinson hopes to begin selling them at about $35 each. 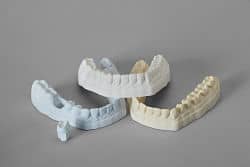