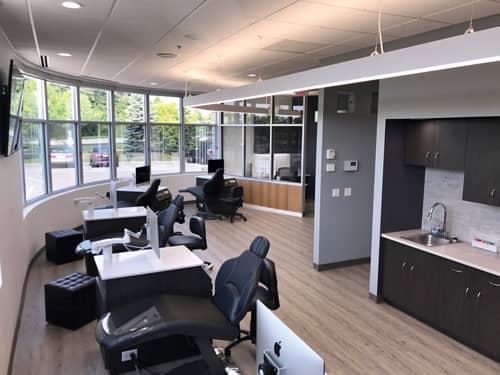 Sleek simplicity was the focus of the design model for Michael King Orthodontics, based in Chanhassen, Minn. A bit of NFL sportsmanship was also a request, but the ladder proved to be the easy (and fun) part of the project that added spunk to the new office.

According to Robert Shaffer, president of The Foundation Architects, Minneapolis, whose company conceptualized and implemented the design of King Orthodontics, the design of the office was “an interesting one.”

“This was the [doctor’s] first move to start his own practice, and he wanted the space to be sophisticated enough for adults, but still playful enough for kids to feel at ease,” Shaffer notes. “The challenge came with marrying these design requests throughout the office, especially in the treatment bay.”

Prior to opening the office in Chanhassen, Michael King, DMD, practiced in a handful of facilities throughout the Southwest and Southeast. In this time, he was able to mentally document what worked and what didn’t, in terms of patient flow.

“In the design planning phase, we mostly focused on the ‘rush hour’ traffic that takes place in an orthodontic office,” explains Shaffer. “It was the intersection versus interconnecting aspect that really outlined the framework for how the treatment bay would ultimately look and be utilized.”

An interesting design element to the construction of the building was an arched line of panoramic windows in the treatment bay. Shaffer and his team took the dramatic curvature of the windows and ran with it, throughout not only the treatment bay, but the entire office.

Upon entry, patients are greeted with a crisp, clean, and spacious reception area that is designed in a circular pattern. The color palette is a mix of cool greys and warm browns. Textured grey and white carpet, charcoal-colored walls, and sleek, light-grey upholstered chairs give a nod to the again-popular midcentury designs that have recently resurfaced. Accents of warm, stained-wood panels and rose-colored accent lighting make the room feel chic, yet calming—a perfect launching pad for arriving patients. The entry is both sophisticated for adults, while warm and welcoming for kids.

“We wanted to take a layered approach to the design,” Shaffer notes. “The concept was to be monochromatic in a sense, but also provide some fun.”

Early in the planning process, King admitted his untiring devotion to the Minnesota Vikings, and thus the fun started, according to Shaffer.

“Dr King wanted the sports motif to be present throughout the office,” he recalls. “So, I took into consideration the colors in Viking Stadium [U.S. Bank Stadium] and pulled some inspiration from there.”

The most prominent result of the brainstorming session became the treatment bay. The room features a half dozen charcoal-colored chairs that are specifically placed in front of the curved panoramic windows for optimal viewing—much like being in a box seat at the stadium. “The placement of the chairs allows patients to receive treatment in privacy without walled-off isolation,” Shaffer says. “Additionally, the arrangement really helps to ease the headache of patient traffic.”

The large windows also allow for ample sunlight to stream in. But, when that sunlight gets a little too ample, Shaffer and his team affixed a shading system that keeps patients comfortable and staff un-blinded by the rays.

The bank of windows in the practice’s treatment bay is a focal point. However, according to Shaffer, the curvature provides a few other design inspirations, including what he refers to as “boomerang tables.”

Made of Cambria quartz, these tables aren’t any run-of-the-mill quartz countertops. The ones fitted in the treatment bay, x-ray room, reception area, and private consultation room are manufactured especially from a Minnesota producer who made sure that the Viking gold and purple highlights were prominent in the surface of the design. And the design is, as described, in the shape of a boomerang.

“It’s a funky and cool product,” Shaffer adds. “It completely pulled the entire concept of elegance, sophistication, and fun together.” 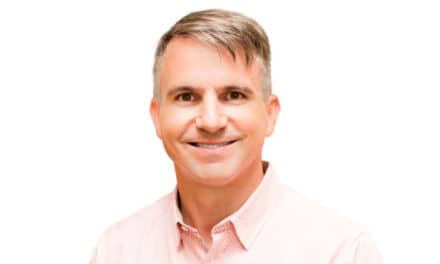