Orthodontists across the country donate a significant amount of their time and resources annually to treat individuals who desperately need their services, but have no financial means to pay for them. But these independent efforts demand a tremendous investment of time and resources, so they are often sporadic and frequently unrecognized. Three charitable organizations can help facilitate giving opportunities by relieving orthodontists of the administrative and marketing efforts necessary for the successful execution of philanthropic endeavors.

Aron E. Dellinger, DDS, MSD, was serving as president of the Indiana Association of Orthodontists when the AAO approached him about the DOS program. His first patient began treatment in 2011 and will finish this year. The American Association of Orthodontists (AAO) joined forces with the Dental Lifeline Network (DLN) in 2009 and established Donated Orthodontic Services (DOS) to offer pro-bono treatment to qualified children.

DOS currently has chapters in Illinois, Indiana, Kansas, New Jersey, and Rhode Island, and hopes to expand in the future. Gayle Glenn, DDS, MSD, president of AAO and a private practitioner in Dallas, explains that DOS identifies one or two orthodontists in a state and asks them to serve as a chairperson, spreading the word, recruiting additional practitioners, and helping the program run smoothly.

Glenn says, “We look for the orthodontist to accept two cases a year, but this is not required. Before accepting a case, an orthodontist can review the application, and if the case is outside his area of expertise, or for any reason, he can refuse to treat.”

A dental provider or a school nurse typically refers patients, who are then screened for financial need and to determine if they will comply with home care recommendations and keep all appointments. Orthodontists offer their services at no cost, although parents of patients are asked to pay an application fee. “It’s like paying it forward so another patient can participate,” Glenn explains.

Since its inception 4 years ago, more than 100 children have completed treatment. Glenn notes that when parents find out their children have been accepted into the program, they often “feel like they’ve won the lottery, they’re so thankful.”

Aron E. Dellinger, DDS, MSD, owner of Orthodontic Specialty Services in Fort Wayne and Warsaw, Ind, was serving as president of the Indiana Association of Orthodontists when the AAO approached him about the DOS program. With his networking connections, he was in a position to enlist other orthodontists and organize the chapter. He gladly accepted the opportunity.

Dellinger explains that most orthodontists already offer some courtesy treatments, but these activities often go unnoticed. “Ten percent of the fees I generate I give away; that doesn’t include charities to other things. Orthodontists can give away treatment on their own, but why shouldn’t the specialty be acknowledged and credited for its generosity?” Participation in programs like DOS makes this possible.

Dellinger’s first patient began treatment in 2011 and will finish sometime this year. He says, “The intention is to provide services for the individual that are comprehensive and inaccessible if DOS didn’t exist.” When the patient requires services from providers outside the orthodontic circle, DOS helps to coordinate them, he adds.

Being part of DOS has made the task of serving others in need easy, Dellinger notes, pointing out that DOS tracks the patient, services rendered, and financial matters. “There is accountability support from DOS. They vet the patients we think are in need and confirm it. They follow through on making sure there is access to transportation. They check in on patients to make sure they are keeping appointments. We do that too, but it’s nice to have an outside source.”

As the director of a cleft palate team, Dellinger sees many children who need serious orthodontic care. “We have the unique ability to heal a hurt. We also need to ask ourselves if there is an obligation to step in and help. We can make a difference to fix a problem. Braces are not donated from an outside source. The work is being driven by people doing the work because they care about you,” Dellinger says. “For the most part, we’re are blessed as professionals, and now have the unique ability to do what we do through DOS. I’m glad it’s in place.”

Patients express a combination of delight, shock, and bewilderment when accepted into the program, Dellinger notes. “Some of the parents cry for joy. They never thought this would be a possibility. It warms your heart to know you are helping someone who needs it.”

Smile for a Lifetime

Mark W. Reynolds, DDS, poses with Smile for a Lifetime patient Lastasia. In 2008, Benjamin G. Burris, DDS, MDS, founded Smile for a Lifetime Foundation, and in just 5 years the organization has grown to include more than 220 orthodontists in 150 chapters in 44 states and Canada. Michelle Von Fange, MA, national executive director, explains that Smile for a Lifetime oversees all aspects of the pro-bono program: screening patients; managing paperwork; and providing templates, PowerPoint presentations, and letters of invitation for the participating orthodontists.

Patients accepted into the program pay no application or treatment fees. Participating orthodontists commit to treating a minimum of six patients annually and help to build networks. Von Fange points out that the organization encourages each chapter to form diverse boards comprising lawyers, teachers, journalists, social workers, and businessmen and women. “These board members become community connections,” she says.

When patients require services beyond orthodontic care, such as extractions, implants, or special headgear, the orthodontists conduct fund-raising events to cover these charges. “Most of these doctors come from blue collar backgrounds and believe in helping others succeed,” Von Fange says.

Many chapters incorporate some type of “pay it forward” initiative involving their young patients. Von Fange says research shows that children who become involved in community service before the age of 14 have an 85% to 90% chance of becoming lifetime givers. “These kids commit to 20 or 40 hours of community service as part of the program,” she notes.

Smile for a Lifetime partners with two national organizations: the Boys & Girls Clubs of America and the Court Appointed Special Advocates (CASA) Association. “We hope to add a national partner every year,” Von Fange says. In addition, Ormco Corp provides the braces for treatment. “Ormco has donated more than $100,000 in wires and brackets,” she adds.

Mark W. Reynolds, DDS, of Reynolds Orthodontics in Summerfield, NC, first became aware of Smile for a Lifetime in 2010, and the concept immediately “grabbed” him. A service-minded professional, he felt called to be part of this program. His wife, Jill, serves as administrative director of the local chapter, which launched in fall 2010.

“This is an awesome way for me to plug into the practice and be part of the program,” she says. “Our chapter is designed to meet the needs of children not covered by Medicaid. There are a lot of hard-working parents, but braces are not in their scope of possibility. Some of these kids are deeply wounded and have suffered as a result of bullying. So many parents are guilt-ridden, especially when their child is ridiculed in school. We not only change their smiles, but we help to heal their wounds.”

Reynolds enjoys seeing the transformation in his patients as they gain confidence. “He helps them feel comfortable in their own shoes,” says his wife. “He treated 12 patients the first year, 10 the second, and five this year. We try to position this service as a scholarship. It’s something they’ve earned, and not a handout.”

Some patients require extensive dental work, which calls for collaboration. For instance, one young man was missing 10 permanent teeth and needed the services of a prosthodontist and periodontist. Reynolds contacted a colleague who donated approximately $50,000 worth of periodontal work. “This young man has since gotten married and is now in college. It’s rewarding to see him change and for us to go on his journey with him,” Jill says. “This becomes a gift not just for the patient, but also for the family.”

Melanie Johnston, marketing coordinator for Smiles Change Lives, explains that families pay a $600 fee, which helps the organization find more providers and more patients. “We view the contribution as paying it forward. We give a hand up so kids can get something they couldn’t otherwise afford,” she says. “The orthodontist donates the services, and SCL offers marketing opportunities to get his or her name out in the community.”

SCL does the dental and financial screening to identify the most appropriate candidates. During this process, SCL emphasizes the importance of compliance, family involvement, and overall responsibility, according to Johnston. Like the other programs, SCL provides several tools to help market the provider and the pro-bono services, including letters to referring dental offices, press releases, and other publicity pieces.

Patients must be 200% below the poverty level to be accepted, which is standard for all the pro-bono orthodontic programs. To be accepted into the SCL program, the child needs to have a dental screening form, have good oral health, and no fewer than four baby teeth, Johnston says. Most important, each child must write an essay explaining why he/she needs treatment.

Each orthodontist in the program receives a list of local referring dentists who help recruit patients, and every provider determines how many cases to treat each year. SCL takes care of all the paperwork, allowing the orthodontist to concentrate on using his or her expertise to help the patient. Johnston points out that applications often outnumber providers, and SCL is constantly seeking additional orthodontists for the program.

In 2004, Kevin Ensley, DDS, of Ensley Orthodontics in Beaverton, Ore, launched Smiles For a Bright Future, an internal program that provided dental care to children in foster care. The program was basically run as a non-profit foundation out of the office, but when the person running the program retired, no one else assumed responsibility. Jan Shannon, practice manager, heard about SCL, looked into it, and found the program an ideal fit for Ensley’s practice. She subsequently became the practice’s internal SCL coordinator.

Ensley joined SCL in 2011 and accepted his first patient the following January. “In 2012, Dr Ensley treated nine SCL patients. He plans to treat 10 in 2013 and another 10 in 2014,” Shannon says. “Dr Ensley feels strongly that he’s fortunate to be able to do this work. He wanted to find a way to give back and share his expertise.”

Unlike Ensley’s previous in-house pro-bono program, SCL oversees the recruiting, screening, and administrative duties. “They take care of the participation fee, make sure that the patient sees a dentist first, and make sure the patient is qualified financially,” Shannon says. “Then we see the patient and decide if we can treat. We control the patient flow. If we’re full, they don’t send notices. If we’re not ready, they don’t push. This has been a tremendously easy way to give back.”

Ensley has found the patients to be extremely grateful, very cooperative, and willing to comply with all the requirements. Shannon agrees, recalling the first patient who started treatment. “Brandon thanks us every time he comes in. It makes me proud of Dr Ensley,” she says. “When a person’s smile is healthy and attractive, it opens a lot of doors in life. It’s not just getting them straight teeth. It’s giving them a path to a better life in many ways. It feels good to know you are making such a difference in their lives. It’s a good fit with an orthodontist’s values.” OP

A Global Celebration is Planned for World Oral Health Day 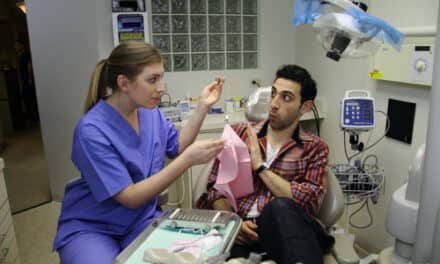 After the Braces Come Off 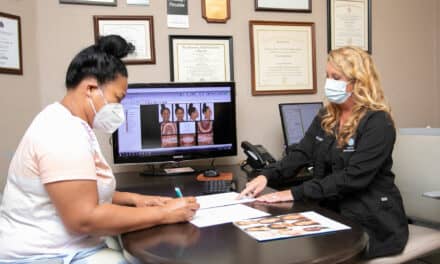