In the Office: A Practice Constant 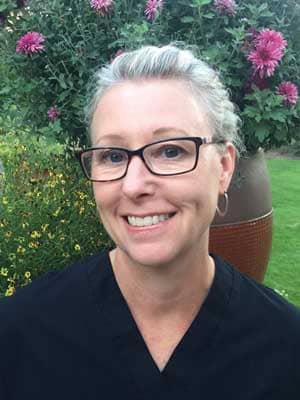 For close to 30 years, Holly Brown has been a constant at Dischinger Orthodontics, Lake Oswego, Ore. Whether it’s the big milestones—Bill Dischinger, DMD, joining the well-established practice of his father Terry G. Dischinger, DDS, in 1999—or the more routine milestones of a busy orthodontic office, like a special patient seeing their completed smile for the first time, Brown has been there—first as an orthodontic assistant and, for the last 20 years, as clinic coordinator.

Brown is part of a five-person team of orthodontic assistants. As clinical coordinator, she is charged with managing both her colleagues and the clinic.

While she is there to be both coach and sounding board for her team, Brown and each of her colleagues have a lot of autonomy when it comes to getting their jobs done once the doctor has seen the patient.

“Everyone is responsible for their own chair and their own group of patients. So everyone works pretty independently,” she says, noting that Bill Dischinger seems to prefer it that way. “I’m sure other orthodontists are more involved. [But with Bill], I’ll say, ‘I think we should do this,’ and he responds, ‘OK.’ He gives us a lot of autonomy that way.”

For Bill, that autonomy is a result of the fact that he knows Brown can make the right calls.

“Holly is like having a second orthodontist in the practice for me. She can diagnose what needs to be done on patients as well as any orthodontist and having that second set of eyes is invaluable. She frees me up to spend more time with each patient and stay better organized and on time,” says Dischinger.

As clinic coordinator, Brown assumes her leadership hat when it comes to clinic meetings and her team’s reviews, and when any protocol or procedure change is needed. She is responsible for both her team’s training and implementing any new protocol or procedure within the clinic—most recently, the implementation of the iTero® Intraoral Scanner from Align Technology Inc. Often this calls for working in conjunction with the office’s treatment coordinator and office manager to ensure that new initiatives are implemented effectively. “[The three of us] are always communicating about what is going on in our areas,” she says.

And at Dischinger Orthodontics, there is always change. The practice is always trying new techniques, procedures, and products. Brown knows it’s all part of being a successful orthodontic practice keeping up with the latest developments in the field. Given her front row seat to the evolution of the field, Brown signals out self-ligating brackets as the biggest game changer she’s seen in her career. “That was night and day for me,” says Brown, who has been working with them for some 20 plus years now.

In fact, she remembers how she and three other members of the staff first heard about them. “We went to visit Dr Damon’s office in Spokane, Wash,” she recalls. “He said, ‘I have to show you these brackets!’ I came back here [to our practice] and I said to Terry, ‘You have got to try these!’ and he said, ‘Yeah, Dr Damon told me about them.’ So we started using them then. And we have used them exclusively ever since. I think they’re amazing.”

On a daily basis, Brown makes a point of examining the next day’s schedule—paying attention to each procedure and patient. It allows her to better prepare her team the next morning for whatever the day might throw at them. “If I see something that’s different [on the schedule], I’ll let that assistant know; or if there’s a difficult patient or a mom who is concerned about something, I’ll let the assistant know,” Brown says.

Spending time on the schedule in advance of the day allows Brown and her team to also be more efficient. “I like to plan stuff,” she says. That means that with every appointment, she is asking, “What are we doing today?” Once she knows the answer to that question, she and her team in the clinic can have everything ready and get started once the doctor hands the patient over. “We can get right to it and not waste time,” Brown says.

She also makes a point of looking ahead to a patient’s future appointments. “We try really hard to plan and forecast what we’re going to do next time so we have the right amount of time allotted for that procedure and can stay on schedule,” Brown says. Adding, “Efficiency is big for me around here.”

When Brown went into her dental assisting program some 30 years ago, she knew right off the bat that she didn’t want to work in general dentistry. “It seemed kind of boring,” she says. Instead, she wanted to work in orthodontics. When Brown finished her training and was ready for her externship, the timing couldn’t have been better. “Luckily, Terry had three spots he was trying to fill and I got hired on here then—and I’ve been here ever since.”

For Brown, it’s the patients who make her job the most satisfying. “I love working with the patients. They’re a blast. They’re so different—from little kids to teenagers, to adults. They’re so much fun to interact with—even the more high maintenance people. I just look at it as a challenge to make them happy and meet their needs,” she says. In the end, it’s about seeing each patient’s “beautiful smile when they’re done.” OP

Alison Werner is editor for Orthodontic Products. She can be reached at [email protected].