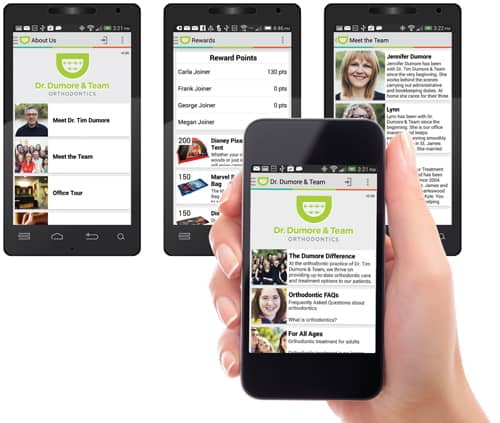 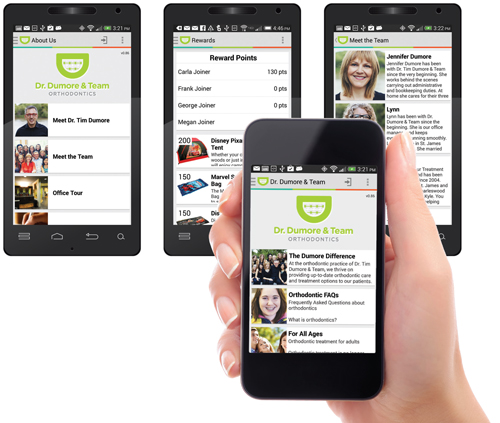 When the iPad was introduced in July 2008, the number of apps available on Apple’s App Store hovered around 3,000. Today, according to apple.com, more than 1.2 million apps are available to users, and that number will continue to grow.

As the saying goes, there’s an app for nearly anything these days. From entertainment to education to healthcare management, they’re all designed to deliver in a specific way, whether it’s to simplify or enhance the day-to-day life of the user.

To this note, branded apps have a unique footing, especially in business. These types of apps are designed to give retailers a direct link to their consumers’ smartphones or tablets. And, as smart device proficiency has increased over the last half decade, the popularity of branded apps has exploded.

Forbes magazine recently discussed a report that found nine out of 10 of the world’s most powerful brands—players such as Apple, McDonald’s, and Google—offer downloadable apps to engage with consumers. With this in mind, orthodontic practices—large and small—should consider taking a page from the branded app playbook of these well-branded companies. 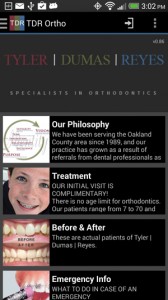 These platforms are designed to be a value-added and entertaining extension to the practice’s website.

“Not having to go to website, which tends to be a bit more complicated and time-consuming when using a smart device, is what makes a branded app most beneficial to patients of an orthodontic practice,” says Tim Dumore, DMD, BSc, MSc, FRCD(C), of Dumore & Team Orthodontics, Winnipeg, Manitoba, Canada. “Once the user is logged in to the app, they can easily access specific information about the practice, such as appointment times, reward status, and even view images of their treatment progress.”

According to mashable.com, a digital news network that focuses on tech-based information, consumers spent six times as much time using retailers’ apps this past holiday season compared to app usage at the same time a year ago. Additionally, the network reports that more than 60% of affluent shoppers have a more favorable view of brands that offer mobile apps.

“It adds to the whole perception that patients have of a practice,” Dumore adds. “Offering a branded app to patients lets them know you’re a bit more savvy, and that you’re using the latest technology and services.”

While savvy and helpful, branded apps are not a one-size-fits all kind of technology. A number of nuances should be considered when realizing the right fit for a practice.

Forbes recently reported on the number of key elements to consider when developing or selecting a branded app. For starters, many businesses make the mistake of developing an app that simply recreates the website. Instead, an app should be viewed as a way to provide users (ie, patients and their parents) with additional value, albeit on the go. For example, QR code scanning, picture sharing, and instant access to share information via social media are all incentives to using an app rather than visiting a company’s website.

The orthodontic profession has a host of distinct needs in which a blanket branded app will not satisfy. However, according to Dumore, he recently took part in a brainstorming session hosted by Ortho2, Ames, Iowa, to develop the Ortho2 Practice Connect branded app specifically designed for orthodontic offices. The session brought together 20 orthodontists from across North America to share their ideas with program engineers regarding how a branded app can benefit both an orthodontic practice and its patients.

“Orthodontists at this conference discussed the desire to give something unique to patients and parents, expanding their practice community, while also allowing for easy communication and making their practice stand out,” notes Amy Schmidt, director of marketing and corporate relations for Ortho2. “Since Ortho2 Edge practice-management software was built from the ground up for the cloud, it provided the perfect platform for such an app.”

The Practice Connect branded app enables patients to have instant access to their appointments, images, animations, and rewards. Parents also can view financials and make payments via their smart devices. The app has been designed to allow patients to select appointment reminder preferences and check in when they arrive at the office. Prospective patients also can use the app to learn about doctors, staff, facility, and treatment information, including videos or other desired content.

“Having a number of orthodontists weigh in on this particular app’s development has resulted in a great tool that focuses on the marketing efforts and software within a practice,” Dumore notes. “I’m proud to have been a part of it.” 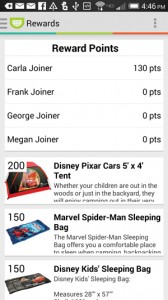 Users can easily access information pertinent to them, including reward status.

Tips for the Right App

Whether a branded app is used for a regional orthodontist office or a worldwide luxury clothing line, it’s intended to provide a useful and unique experience to users, independent of what can be provided via the company’s website.

When considering bringing a branded app onboard, there are a number of considerations that should be ironed out, similar to any other new marketing effort.

Forbes magazine suggests business owners stop considering branded apps as a way to direct market to customers. Instead, this technology should be used to provide additional value to patrons, as well as make it entertaining. The ultimate incentive for offering a branded app is to invite patients (and potential patients) to become regular users.

With regard to the Practice Connect branded app from Ortho2, Schmidt notes that users don’t have to be patients to download the platform. Thus, orthodontists can use the app to market their practice to anyone in their community.

“For our practice, we use the branded app to market to our existing patients,” Dumore adds. “There are a number of things that we do that patients may not already know about. Whether it’s services that we offer, or new incentives in our rewards program—the app is the best way to share this information in an entertaining way. We also share our goals as a practice, which demonstrates how we’re different from other practices.”

The issue of usability is an important one to keep in mind when offering customers a branded app. The platform should be easy to navigate while at the same time being informative and, if possible, entertaining.

According to mashable.com, which recently released a report on efficient designs of branded apps, if a business offers an app that is confusing, hard to navigate, or does not provide users with the types of information they want, they are less likely to use the app again, and may form a negative opinion of the actual company.

Simple usability parlays into a point that must be made about user engagement. Mashable.com points out that a number of branded apps available today don’t invite interaction from users. App engineers suggest making sure the platform represents the business and its mission, while also engaging users in a creative way. This can include the ability to post comments or share progress on social media.

“Branded apps are helping to change the way we communicate with patients, and they’re going to continue to evolve.” Dumore says. “The apps of the future are going to be more full-featured. They’re going to offer the ability to schedule appointments or contact the office more easily. We may even start to see the ability to chat live with the office,” he adds.

“People are busy, and the traditional phone system can be time-consuming. However, with the use of branded apps, I foresee the communication between the patient and the practice being more open, more accessible, and ultimately more beneficial for both parties.” OP

BIOMET 3i Launches its Solutions App