Decreasing the failure rate of TADs

As previously defined, there are two classifications of failure of temporary orthodontic anchorage devices (TADs): inadequate primary stability and delayed mobility.1 Failure, in this case, means that after loading the anchor with a chosen force, the anchor becomes mobile. The anchorage value of the device is then negated. The purpose of this article is to propose a theory, the wall-hanger effect for TADs, that could help reduce their failure rate.

What Makes TADs Fail?
Evidence shows that anchorage values of TADs come primarily from cortical bone.2 The placement of a TAD may be bicortical or unicortical. A unicortical placement means the anchor is dependent on only one cortical plate, as opposed to an anchor that is longer and contacts both cortical plates, such as in the area of the lower anteriors. An anchor of sufficient length can pass through the facial cortical plate and contact the lingual cortical plate—thus, a bicortical anchor. The anchorage value obtained from TADs is a mechanical effect, as opposed to dental implants that are dependent on bone integrating with the implant. Therefore, if you place the device in an area that does not have adequate bone density, the anchor is more prone to failure. The amount of cortical bone in contact with the thread surface of the anchor is important; the greater the contact area of bone to anchor, the greater the retention.

The placement technique can also cause an increase in the failure rate of TADs. For example, bicortical placement has been demonstrated to be more stable than unicortical placement.3 If you use a self-drilling, self-tapping device, don’t drill a hole through the proximal (facial) plate and only partially drill a hole in the distal (lingual) plate; the threads in the proximal plate may be stripped during placement. The stripped threads in the proximal plate will then negate the anchorage value of the anchor being placed bicortically.

If you use a screwdriver-type tool to place a TAD and the handle of the device is wobbled during placement, thus causing a larger hole, this could also increase the failure rate.

Some of the TADs on the market have very low tolerances between the driver head and the anchor. This often makes it difficult to remove the driver after placement. If you place an undo torque on the handle during the removal of the driver head from the anchor, this can also increase the failure rate.

It is often advisable to drill a pilot hole prior to placement, such as in D1 bone. If, during this drilling process, the bone is overheated due to increased RPM or a dull drill, the cortical bone could become necrotic

after the insertion of the TAD. This, in effect, creates too large a pilot hole; thus, a loose anchor. If you wobble the handpiece during the drilling of the pilot hole, the result will again be a pilot hole that is too large and another increase in failure rate.

Improper TAD size can also contribute to an increased failure rate. For example, when placing a TAD in the palate, the orthodontist needs to measure the thickness of the tissue. The thickness can vary from 2 mm to 5 mm. If the tissue is 4 mm thick and the anchor chosen is 6 mm long, this does not allow for adequate bone-to-anchor contact to give the desired anchorage value. The diameter of the anchor is also a factor. It just stands to reason that a larger-diameter device gives more surface-to-bone contact and a stronger anchorage.

To take advantage of this wall-hanger theory, you should first select an anchor with a base of sufficient size. It is thus necessary to remove a plug of tissue, or use an anchor that has sufficient diameter to allow the base to fit against the surface of the cortical plate. It is important when placing the anchor to penetrate deeply enough to allow the base to contact the bone.

If the anchor is placed too tightly, its self-taping threads could strip the threads being cut into the cortical plate, thus reducing the retention rate. 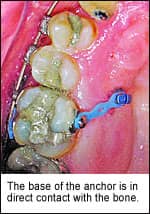 A word of caution: When removing a plug of tissue from the palate, you should be prepared to deal with the greater palatine artery that runs anteriorly after passing through the greater palatine foramen. If this artery should be violated, it is necessary to place a blind suture posterior to the area from which the plug of tissue was removed. This should stop any excess hemorrhage.

The anchor demonstrated here at right has a 1.5-mm base length from the edge of the base to the center of the anchor. Note also that the anchor base is in contact with the bone. No tissue separates the base of the anchor and the bone surface.

Idiscussed bicortical placement previously in this article. Although this is a viable placement technique, it is my opinion that few orthodontists will be excited about drilling a pilot hole 8 mm to 10 mm in depth. If the hanger-effect theory proves to be valid, the need to use the bicortical technique could be negated and the length of the TAD could be shortened. This also decreases the chances of hitting a root or other structures.

This wall-hanger theory for TADs certainly needs to be proved or disproved with good controlled scientific research.

TAD Force Differentials
The purpose of this computation is to compare the force values placed on the bone at the point the anchor has the most force against the bone, using two TADS that have the same force, the same thread diameter, the same head diameter, and the same height from force application to bone contact. The only variable is the fact that the base of the second anchor’s head is placed on the cortical bone. This computation will show that the force applied to the bone is less on the TAD that has its base against the surface of bone.

The formula used is as follows:

Jack C. Fisher, DMD, has maintained a practice limited to orthodontics since 1982. He has placed in excess of 500 TADs. He can be reached at [email protected]