Clear aligner therapy (CAT) is an increasingly popular treatment option and arguably one of the most divisive in the orthodontic world. Last year, 11% of all orthodontic cases were started without traditional bracket and wire methods. As the patient demand for more aesthetic treatment modalities continues to increase, this number will surely grow. Whether a clinician embraces or is reluctant to use this technology, there is one certain truth: It is here to stay.

However, the lack of ability to bond to clear aligners has been a huge detriment and frustration for clinicians, reducing the number and types of cases that can be treated with clear aligners and the ability to facilitate optimal treatment outcomes. Treatment planning and setup, as well as clinical troubleshooting, are critical to getting optimal results with CAT. To this end, products like Bond Aligner™, developed by Reliance Orthodontic Products, in conjunction with Laurel Martin, DDS, MS, are being designed to address the inability to bond to clear aligners.

Sandblasting or roughening up the surface of the aligner was attempted as an early solution to address bonding to clear aligners. Treating the aligner with a monomer-based plastic conditioner was another alternative that was investigated. In the end, all of those methods proved to be more lengthy and cumbersome clinically with unsatisfactory bond strength. Bond failure continued to result in patient and clinician frustration.

To that end, clinicians sought an adhesive with the following properties to improve the bond to clear aligners:

With Bond Aligner, clinicians have the convenience of applying this adhesive to the base of any desired auxiliary, placing it on the aligner, and light curing. No matrix preparation or primers are necessary. In addition, this adhesive has several unique characteristics. Most importantly, as Martin suggested, Bond Aligner was designed with a low modulus of elasticity. After the auxiliary is light-cured, the bond strength of Bond Aligner is such that the auxiliary is often difficult to remove. Bond Aligner that has been cured to the surface of an aligner generally needs to be removed with a dental handpiece and bur. Bond Aligner will adhere to any clear thermoplastic aligner material, including, but not limited to, Invisalign®, Essix®, and Tru-Tain™.

Before Bond Aligner, it was often necessary to make cuts or remove small sections of an aligner to allow for the bonding of an auxiliary directly to a tooth surface. As a detrimental consequence of those reliefs, the mechanical integrity of the aligner is compromised at the cutaway site, resulting in a weak spot in the aligner. In addition, the reduction in adaptation of the aligner to a tooth adversely impacts the biomechanical forces at the site relieved, reducing the aligner’s ability to facilitate tooth movement and function properly. Finally, unwanted movement can occur at the tooth being used as an anchorage site. All of the above are reasons for the need to bond to an aligner rather than directly to a tooth to achieve the tooth-moving forces that are wanted and not introduce those that are not.

Traditional problems that clinicians have with CAT include:

When minor tooth movement is desired to fine-tune an aligner case, small dimples are often placed in an aligner using dimpling pliers. Filling retention dimples with Bond Aligner will reinforce the dimple, thus preventing collapse and optimizing the movement achievable with those dimples. By placing those dimples in the aligner at tooth undercuts interproximally, the dimples can also be used to increase retention of an aligner. Again, Bond Aligner can be used to back up that function.

What about root movement with CAT? Root movement, whether translation, tipping, or torquing, has been a historical weak point in aligner therapy. Bond Aligner was developed primarily to bond intraoral elastics directly to aligners. Little did we know Martin had bigger plans. We were astonished with the difficulty of the tooth movement Martin and her staff were performing with CAT utilizing the new technology of Bond Aligner.

The power arm over the canine in the preceding example will act as the anchor point—anchoring the tipping forces being directed to the lower right lateral root. The aligner covering the patient’s right lateral has been cut away, and a power arm has been bonded directly to the tooth. Another power arm is bonded to the aligner over the lower right canine. An elastic that is engaged by the patient is placed between the power arms to distally tip the lateral root.

Figures 3A and 3B demonstrate a single-tooth intrusion using TADs and aligners. Bonding materials, like Bond Aligner, make difficult movements with aligners, such as single-tooth intrusion, possible with more reliable results. Using Bond Aligner technology not only produces greater anchorage strength and avoids unwanted tooth movement—ie, adverse mesial root tipping of the canine in this situation—but it can provide a better vector of force for the tooth movement that is desired. This is a prime example of the new possibilities available to clinicians given the opportunity to bond directly to thermoplastic aligners.

Other new frontiers in aligner therapy have been opened as a result of the development of Bond Aligner. Maintaining aligner adaptation by combining aligner therapy with TADs can accomplish many movements not previously believed achievable with aligners alone. Movement can be built directly into the aligners and the aligner adaptation maintained utilizing TADs. Individual tooth movement as well as segmental movements can be accomplished with this joint approach to CAT.

Figures 3A and 3B are an example of single-tooth intrusion using TADs and aligners.

The ability to bond auxiliaries to aligner materials results in more optimal reliable CAT, not to mention fewer emergency visits as a consequence of debonding of auxiliaries. Difficult movements with aligners are now possible with more reliable results, including, but not limited to, single-tooth intrusion, segmental intrusion, anterior/posterior arch coordination, root uprighting, anterior extraction, posterior extraction, posterior intrusion, and even full arch intrusion. The end result is improved practice efficiency and increased satisfaction for both the clinician and the patient.

In addition to the ability to bond auxiliaries to aligners, both Reliance and Martin recognized that having an acceptable solution for pontics was an area that needed much improvement. When patients are missing teeth, clinicians have traditionally used either a flipper or a thermoplastic matrix with a pontic. Patients generally do not like flippers, as they can make speech difficult. In addition, pontic teeth often pop out of thermoformed plastics, resulting in an increase in emergency office visits. The rigid pontic is unable to match the flexibility of the thermoplastic.

Replacing missing teeth in CAT requires something that can be produced quickly and efficiently from visit to visit as new aligners are delivered during the different stages of tooth movement. Again, an effective solution was not available. Currently, polyvinyl siloxane (PVS), tinted wax, composite, and even fingernail polish have all been utilized to address this problem. These options provide a solution to simply fill the tooth void but have either aesthetic or retention concerns both short- and long-term. Debris can become trapped between the pontic and aligner, resulting in discoloration and even unpleasant odors. In many cases, they do a poor job of aesthetically resembling teeth. The underlying issue is that they do not bond to the aligner.

Perfect A Smile™ is a pontic painting system that bonds to clear thermoforming plastic materials. A single-paste light-cure system, it is easy to use and efficiently replaces missing teeth. Currently, three shades are available: light, medium, and dark. The shades can be mixed together to achieve intermediary colors. These paints parallel the characteristics of Bond Aligner with a low modulus of elasticity. The thermoformed matrix can be bent and twisted without debonding the painted tooth. The matrix can even be ripped down the middle of the painted tooth without disturbing the Perfect A Smile bond. In the end, a product like Perfect A Smile provides an aesthetic option for missing teeth with little to no failure.

Figures 4A and 4B show a patient with and without a thermoformed plastic retainer painted with Perfect A Smile to replace congenitally missing maxillary lateral incisors.

Figures 4A and 4B show a patient with and without a thermoformed plastic retainer painted with Perfect A Smile to replace congenitally missing maxillary lateral incisors. In this case, thin facings have been painted on the adjacent teeth to color match the teeth due to traumatized discolored central incisors.

Another area of concern for orthodontics is retention and temporization for grafting and implant patients. This can be difficult as oral surgeons most often prefer that no pressure be placed on bone grafting sites to allow for optimal integration of the graft. Hard pontics often have to be relieved after implant placement, which can result in an unaesthetic appearance. With a Perfect A Smile pontic, there is no pressure on the bone grafting or the subsequent implant site while waiting for osseointegration. A tooth void in a thermoformed plastic, painted with Perfect A Smile, is a simple and effective solution.

Perfect A Smile is an ideal pontic solution for CAT as well as missing teeth in the general patient population. In comparison to a flipper, there is no speech learning curve and it eliminates teeth popping out of thermoformed plastic retainers. And because the Perfect A Smile paint bonds chemically to the matrix, it eliminates issues resulting from the trapping of debris.

Both Bond Aligner and Perfect A Smile were developed to help address current limitations and expand clinical options for orthodontists everywhere. With Bond Aligner, auxiliaries can be reliably bonded to clear aligners, thus optimizing treatment capability and outcome, while Perfect A Smile provides an easy aesthetic option for patients with missing and damaged teeth. As important new adjuncts, they aid in providing the highest standard of quality patient care. OP

The author would like to acknowledge Laurel Martin, DDS, MS, who collaborated with Reliance Orthodontic Products to develop Bond Aligner and Perfect A Smile. 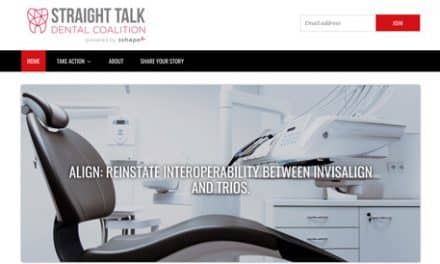 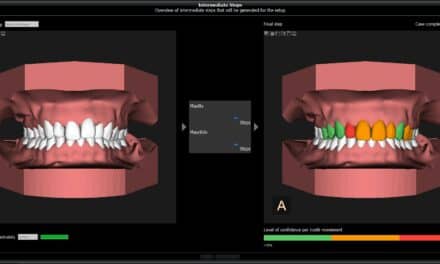