Smoothing Out the Rough Spots 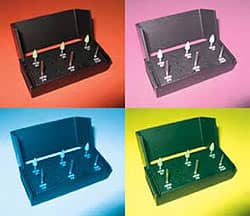 After orthodontic appliances (such as bonded, luted, or cemented devices) are removed at the conclusion of treatment, the remnants of these adhesives must still be removed from the teeth. The Axis Orthodontic Adhesive Removal Set was designed to help remove the residual adhesives and to restore a smooth and aesthetic surface. Combining this three-step system with the latest-generation electric contra-angle (without waterspray and running at reduced RPMs but also maintaining constant torque) permits clear visual identification of remaining adhesive “tags.” The goal is to remove adhesive with less patient discomfort while creating a smoother surface finish due to reduced vibration.

In the era of “full-banded” orthodontic appliances from the past, luting agents such as carboxylate and zinc phosphate cements often adhered to orthodontic bands as they were removed at the conclusion of “braces” treatment. Any excess cement was then typically removed from dental surfaces using a dental scaler.

Since the advent of “bonded” appliances, adhesives that are typically used in orthodontics have changed dramatically. Today, the bands, brackets, and “attachments” used for invisible aligner treatments most often use some type of composite resin bonding agents or glass ionomer cements (occasionally resin-filled).

These newer orthodontic adhesives provide better bond/band strength, but the trade-off is that they are also ultimately more stubborn to remove from the teeth after treatment is completed.

All three devices can be inserted into either low- or high-speed friction-grip dental handpieces (including electric handpieces). Using a high-speed handpiece to remove adhesives is often more comfortable for patients as there is less vibration than that produced by the typical slow-speed. This also produces a smoother finish.1 This system can be used with only a single contra-angle handpiece, thereby improving clinical efficiency.

Removing adhesives with a carbide bur is a flow-driven process (in contrast, diamond burs produce brittle fracture of the resin). In fact, Eliades et al2 concluded that “carbide burs are ideal cutting tools for ductile substrates such as resins.” In addition, Phil Campbell’s Angle Research Award publication1 reported that the “tungsten carbide bur appeared to be the most efficient method of removing highly filled resin and it produced the least amount of scarring.”

After orthodontic appliances have been removed (Figure 1A and 1B), the Axis NTI® 7675 Carbide, a round-end, tapered, 12-blade bur, can be used in either a slow- or high-speed contra-angle dental handpiece to dislodge gross residual resin tags from the enamel (Figure 1C). 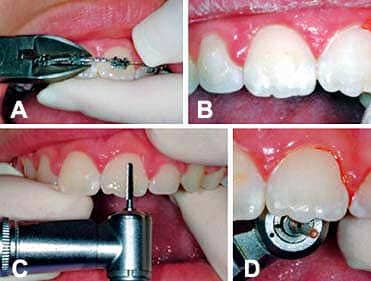 Figure 1: After the appliances are removed (A and B); a round-end, tapered, 12-blade bur can be used in either a slow- or high-speed contra-angle dental handpiece to dislodge gross residual resin tags from the enamel C); and D) enamoplasty of mammelons or uneven incisal edges can be accomplished in this same step. 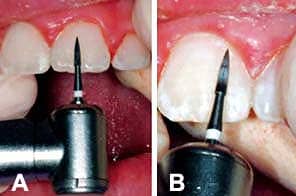 Figure 2: A) The resin/enamel interface is finished with a 30-blade bur designed to remove remnants of adhesives while also creating a smooth surface. B) The pointed shape permits this bur to be positioned at the marginal gingival while polishing away adhesive primers, sealants, or varnishes.

The tapered design of the bur is easy to manipulate around peripheral enamel surfaces, and the round end reduces potential gingival tissue impingement. Enamoplasty of mammelons or uneven incisal edges can be accomplished in this same step (Figure 1D). As an added benefit, this same bur can also be employed for removing composite “attachments” used for invisible aligner treatments like Invisalign®.

The intent of this process is to remove any residual adhesives and cements but not to unintentionally disturb enamel anatomy or overpolish the surface. On the other hand, specific sites of uneven, pitted, or blemished enamel can be refined at this stage. The constant torque and low vibration of an electric dental contra-angle at 35,000 to 40,000 rpm is perfectly suited for smooth, consistent, and comfortable polishing in these orthodontic applications.

After gross composite or cement “tags” have been removed from the enamel surfaces, the resin/enamel interface must be finished. The Axis NTI® Finishing Carbide is a long, flame-shaped, 30-blade bur designed to remove any remnants of adhesives while also finishing the enamel to a smooth surface with minimal vibration (Figure 2A).1,2 The pointed shape permits this bur to be positioned at the marginal gingival while yet polishing away any remaining adhesive primers, sealants, or varnishes that had been used to help prevent enamel demineralization (Figure 2B).3 If the bur is used without water-spray, the residual resin is often visible as the air exhaust from the high-speed contra-angle desiccates the surface of the tooth, making the polishing process easier. 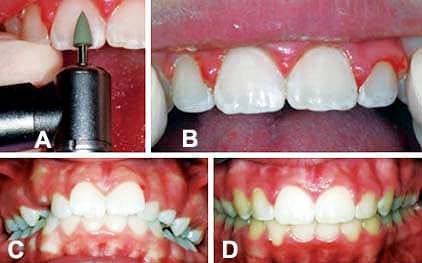 Figure 3: The polisher refines the final enamel surface. This conical polisher can be used in the same low- or high-speed dental handpiece as the previous burs. A light touch at slower revolutions helps reduce the buildup of heat and avoid premature degradation of the bur.

Although the 30-blade carbide produces a very smooth surface during the finishing process, the Axis NTI® Polisher can be used to refine the final enamel surface (Figure 3). This conical polisher can also be used in the same low- or high-speed dental handpiece as the previous burs.

Caution is necessary when using these polishers at high speed, as the silicone will degrade quickly and can become detached from the shaft of the device. Therefore, a “feathering,” light touch at slower revolutions is required to reduce the buildup of heat and to avoid premature degradation. In addition, it is important that both the patient and practitioner routinely wear eye protection during these procedures. An electric contra-angle provides constant torque and the capability to consistently maintain the speed at 30,000 to 40,000 rpm; thereby reducing the potential for “bogging down” the polisher. After a suitable enamel surface is achieved, any additional finishing can be performed using polishing pastes or a slurry of fine pumice as each situation dictates.

S. Jay Bowman, DMD, MSD, maintains a private practice in Portage, Mich. He is a Diplomate of the American Board of Orthodontics, a member of the Angle Society of Orthodontists and the Pierre Fauchard Academy, and a Fellow of the American College of Dentists. He is an adjunct associate professor at St. Louis University, an instructor at the University of Michigan, and a clinical associate professor at Case Western Reserve University. He is the developer of the Axis Orthodontic Adhesive Removal Set. He can be reached at 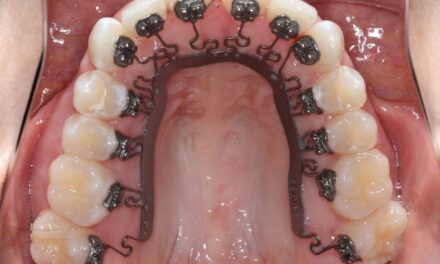 Brava Enters Market as an Alternative to Braces and Aligners