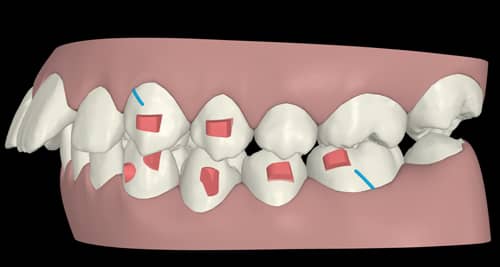 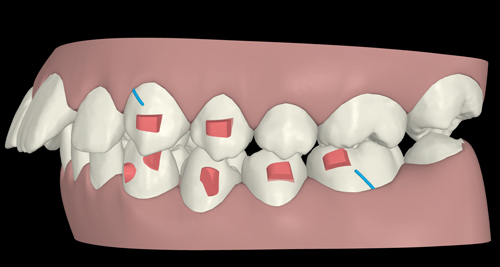 In the United States, only 6% of all teens undergoing orthodontic treatment are being treated with Invisalign®, from Align Technology Inc. Furthermore, a small minority of those patients have Class II malocclusions. For me, these statistics are fascinating for several reasons.

First, teen patients tend to have healthier oral cavities than adults and fewer complicating factors such as missing teeth, periodontal disease, and overly restored teeth. Second, the teeth of teen patients tend to track better than those of adults. Third, teen patients are highly motivated to wear their aligners—they don’t want braces for the prom or class pictures. Finally, there is scientific evidence to suggest that it may be advantageous to treat Class II malocclusions during the pubertal growth spurt.

Barry J. Glaser, DMD, received his doctorate in dental medicine from The University of Pennsylvania School of Dental Medicine and earned his Certificate of Advanced Graduate Studies in Orthodontics from Boston University. He served as associate director of orthodontics at Montefiore Medical Center in New York City from 1992 to 1995. He has been in private practice in Cortlandt Manor, NY, since 1994. Glaser was an early adopter of Invisalign Teen and has extensive experience treating teens and adults of all malocclusions with Invisalign.

With respect to functional appliances, Baccetti, Franchi, McNamara, and associates2 found that patients treated with the Bionator, Activator, and Twin Block appliances had more favorable skeletal effects with regard to mandibular length and ramus height increases when reated at the pubertal peak as compared to patients treated in the mixed dentition, before peak growth velocity. Meanwhile, Frye, Diedrich, and Kinzinger3 found greater reduction in the convexity of the bony profile in patients treated with functional appliances treated during puberty as compared to pre-pubertal patients.

Given that there is evidence to suggest that the effects of functional appliances and Class II elastics are similar, and furthermore that the greatest skeletal effects can be expected during peak growth, the rationale can be made to routinely treat patients with Class II malocclusions using Class II elastics during puberty to maximize the beneficial skeletal effects— in particular, the additional forward growth of the mandible and reduction in facial convexity.

Based on this logic, I developed the following protocol to treat growing Class II teen patients simultaneously with Invisalign Teen® and Class II elastics. This technique is simple, clean, and neat, and does not require additional hardware. Furthermore, multiple phases of treatment are typically unnecessary. 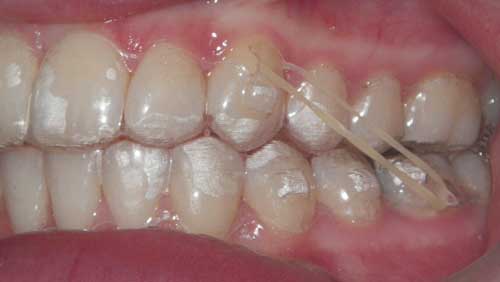 The typical Class II setup on a teen patient, shown here with an optional incisally beveled, horizontal rectangular attachment on the upper left canine. The attachment was placed for aligner retention.

At the initial aligner delivery appointment, all attachments are placed, and the patient is instructed to wear light 1.8-ounce, ¼-inch elastics (DENTSPLY GAC’s “China”). Any light Class II elastic of approximately 2 ounces in force will suffice. If your typical office procedure is to place attachments at the second visit, delay the start of elastics until attachments are placed to avoid unwanted aligner dislodgement.

Monitor aligner and elastic wear at each visit. The compliance indicators provided for Invisalign Teen cases are extremely useful for this purpose. While most patients are compliant with elastic and aligner wear, it is important to keep teen patients motivated. I always begin with positive motivation; praise good behavior, and use initial photographs to illustrate to the patient and parents good progress. For those patients who are not wearing their aligners and/or elastics properly, the threat of switching to braces and Forsus springs, along with the phrase, “If you don’t want to have braces for the yearbook and the prom, just wear your aligners and elastics,” helps play to a teenager’s sense of vanity and may motivate them to stay on track.

The standard amount of time for the average end-on Class II malocclusion to convert to Class I is approximately 1 year. Please make sure you have sufficient aligner stages in your Clin Check setup to last 1 year—approximately 26 stages. If the patient does not have significant crowding or spacing, and the initial Clin Check indicates fewer than 26 stages, ask your tech to ”Please slow down all movements to last 26 stages.” This way, the patient will have a year’s worth of fresh aligners to attach his/her elastics to. 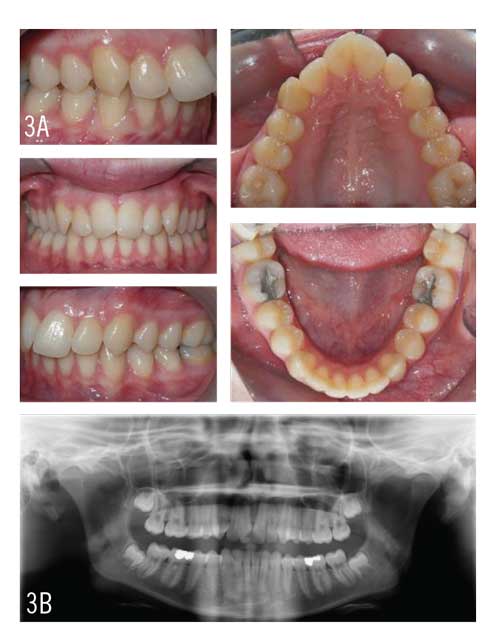 Figures 3A and 3B: A 16-year-old female patient with a Class II division 1 malocclusion with maxillary and mandibular crowding. Treatment included the insertion of attachments, aligners, and the use of light Class II elastics.

A 16-year-old female patient presented with a chief complaint of an “overbite.” Clinical exam revealed a significant Class II division 1 malocclusion with maxillary and mandibular crowding (Figures 3A and 3B). The patient was a performer and asked to be treated with Invisalign Teen.

At treatment end, the patient has a bilateral Class I occlusion with normal overbite and overjet. Superimposition shows the correction was the result of mesial movement of the lower dentition and palatal tipping of the upper incisors.

Treatment commenced on July 5, 2011, with the placement of attachments, insertion of the first set of aligners, and placement of 1.8-ounce, ¼-inch Class II elastics. Refinement aligners were inserted on July 16, 2012. On September 24, 2012, the elastic force was increased to 4 ounces per side. Final retainers were placed on May 2, 2013. Total treatment time was 22 months.

The final photographs reveal a bilateral Class I occlusion with normal overbite and overjet (Figures 3C and 3D).

The cephalometric superimposition (Figure 3E) reveals that for this non-growing patient, the correction to Class I was through mesial movement of the lower dentition and palatal tipping of the upper incisors. The final result reveals a solid Class I occlusion.

This case illustrates the effects of Class II elastic wear on a patient where growth is not anticipated. It should be noted that this magnitude of occlusal change would be much more predictable if the patient were at peak growth velocity (see Cases 2 and 3 that follow). As such, the possibility of extraction of upper first premolars was discussed with the patient and parents prior to treatment. Needless to say, the patient was extremely cooperative during treatment, and extractions were ultimately not necessary.

The superimposition also illustrates excellent control of the mandibular plane angle as well as lower incisor proclination, which is typical of patients treated simultaneously with Class II elastics and Invisalign. 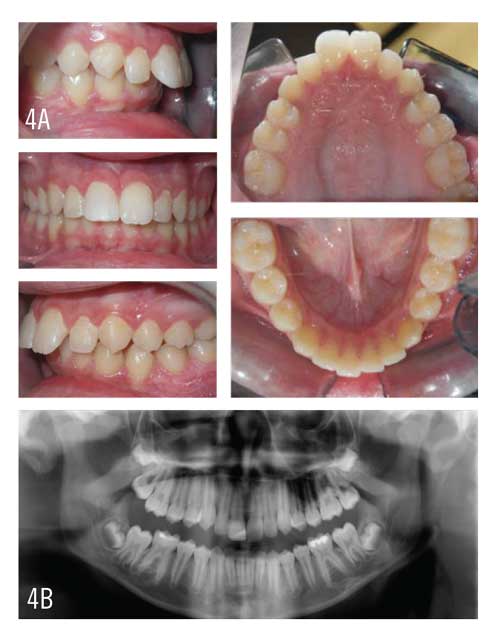 A 13-year-old male presented for correction of his “overbite.” Clinical exam revealed a large Class II division 1 malocclusion, larger overjet, and deep overbite. There was mild upper and lower crowding (Figures 4A and 4B).

Figures 4C-4E: A Class I malocclusion was achieved on both sides, along with a significant reduction in overjet and overbite and well-aligned arches. Superimposition shows the predictable skeletal and dental improvements.

Treatment commenced on March 25, 2013, with the placement of attachments and insertion of the first stage of aligners and 1.8-ounce Class II elastics.

Elastics were discontinued on January 17, 2014, at the time of refinement. Active treatment was completed on December 22, 2014, for a total of 21 months of active treatment.

The final photographs (Figures 4C and 4D) reveal correction to Class I on both sides along with a significant reduction in overjet and overbite and well-aligned arches. The superimposition (Figure 4E) shows the predictable skeletal and dental improvements as documented in the literature.

In addition, excellent oral hygiene was facilitated by use of Invisalign. In my practice, gingival inflammation and enamel demineralization are extremely rare in my Invisalign patients. 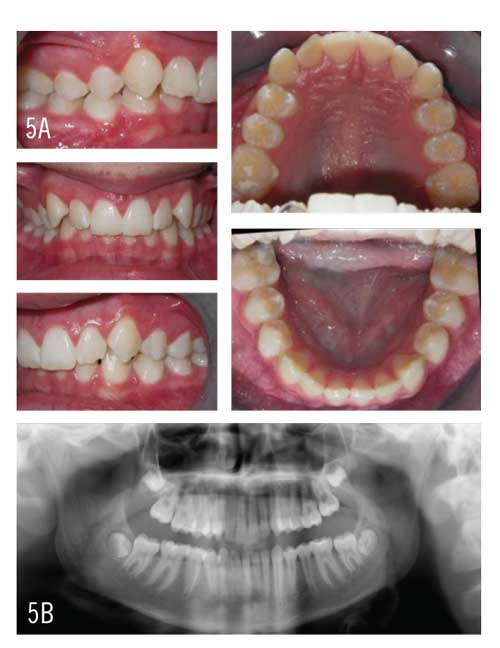 Figures 5A and 5B: A 14-year-old male patient has a significant Class II division 1 malocclusion complicated by a severely deep overbite and ?retro-inclination of the upper incisors.

A 14-year-old male patient presented for treatment with a significant Class II division 1 malocclusion complicated by a severely deep overbite and retro-inclination of the upper incisors (Figures 5A and 5B).

Figures 5C-5E: Treatment included placement of attachments, and insertion of aligners and 1.8-ounce Class II elastics. Final photographs here reveal correction to Class I on both sides with improvement in the deep overbite.

Treatment commenced on September 20, 2011, with the placement of attachments, and insertion of aligners and 1.8-ounce Class II elastics. Elastics were discontinued on October 9, 2012, at the time of refinement. Active treatment was completed on February 19, 2013, for a total active treatment time of 17 months. This was an excellent case to use bite ramps on the lingual of the upper central and lateral incisors to facilitate correction of the deep overbite.

The final photographs reveal correction to Class I on both sides with improvement in the deep overbite (Figures 5C and 5D). The cephalometric superimposition (Figure 5E) reveals the typical growth/dental response to Class II elastic wear.At 15 months post-treatment, the occlusion was stable, as shown in Figure 5F. 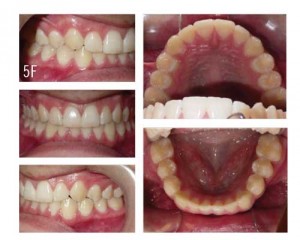 Figure 5F: At 15 months post-treatment, the occlusion was stable.

Teen patients do not want to have school pictures or go to the prom with braces, so they are highly motivated to wear their aligners. If the patient is treated during the peak pubertal growth period, correction to Class I using aligners and Class II elastics is rapid and predictable. urthermore, there is a body of literature that documents and quantifies the effects of Class II elastics. Basing treatment decisions on evidence-based principles gives me confidence that good results will be predictable and routine.

If you are stuck in the “box” of thinking that teens will be noncompliant, think again. I thoroughly enjoy treating teens with Invisalign and have been very satisfied with the clinical outcomes. If you employ the protocol outlined here, I am confident that you will be pleased with the results as well. OP 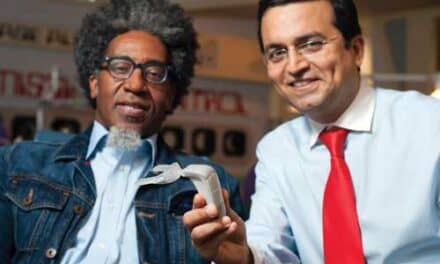