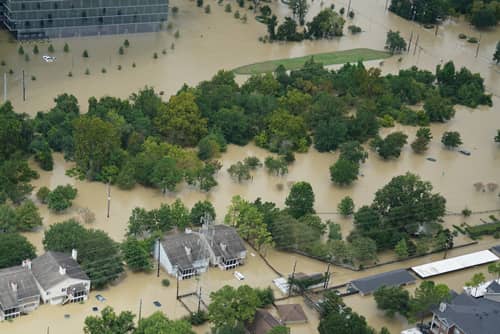 The afternoon of August 28, 2017, Ian R. Healy, DDS, MDS, closed on the purchase of his first practice in Kingwood, Tex.

That night, it was flooded with 4 feet of water—a casualty of Hurricane Harvey.

Healy had done his due diligence: The accountants said the numbers looked great and his loan was approved. His insurance broker set him up with everything from a business owner’s policy and overhead insurance to disability loan protection and standard malpractice insurance.

Missing from all that: flood insurance.

Healy’s reception area before and after it was flooded with 4 feet of water. All photos courtesy of Ian R. Healy, DDS, MDS.

“The day of the 28th, everything was still dry in Kingwood in the area of my office,” Healy recalls. “[The suburb] was doing remarkably well compared to the rest of Houston. We moved forward to closing. Sure enough, that night, Kingwood received an incredible amount of flooding in the neighborhoods.”

Still, the next day it was unclear if Healy’s new office had actually flooded. No one was able to get in to check. But over the course of the day, he watched the news and monitored Facebook posts from people in the area, analyzing pictures to see how buildings near his practice were faring.

“By Wednesday, we knew for sure that it had taken on about 4 feet of water,” he says. That water then sat there for a couple more days before eventually draining out.

Healy knew Hurricane Harvey’s arrival was imminent when he closed on the practice. He’d even contacted his insurance broker before it did to verify that he couldn’t add flood insurance at that point. The answer was “no,” as there’s a 30-day waiting period when there is a hurricane in the Gulf. Healy knew that made sense; but it was cold comfort once the damage became clear.

“It was like a ton of bricks hit me in the stomach. To think I have worked extremely hard, just like so many other orthodontists have, to get to the point where I could finally realize my dream and buy a practice. Then to think, well not only was that taken away, but I might have just lost everything in one fell swoop. That was a pretty devastating realization,” says Healy, who completed his residency at the University of Tennessee in 2016.

If anyone understands what Ian R. Healy, DDS, MDS, is going through, it’s Richard Ballard, DDS. His orthodontic practice in the New Orleans suburb of Metairie, La, was destroyed in 2005 by a tornado during Hurricane Katrina. He offers his own advice for orthodontists in the aftermath of a natural disaster.

According to Healy, he’s not alone in not having flood insurance. Three dentists with offices in the same professional plaza are in the same boat. The fact is the area was not considered a flood zone and had no history of flooding. While some might think that a good business owner’s policy might provide some protection, that’s not the case.

“My business owner’s policy, which is typically what would cover damage to your office, protects me more from anthrax than from flooding,” he says. “I’m protected from seemingly everything else: cyberattacks, terrorist attacks, wind damage—but it doesn’t cover flooding. A lot of private insurers don’t cover flooding from natural disasters or flooding in general. That’s something you usually have to get through FEMA [the Federal Emergency Management Agency].”

In the days since Harvey made landfall, Healy has made himself an expert on his own insurance coverage, and he would advise everyone to do so in advance. “You never want to make the assumption that this will never happen to you,” he says. What’s more, he’d advise everyone to consider flood insurance. “Even if you’re in an area that hasn’t been affected by flooding or isn’t in a flood plain, it’s still a good idea to consider getting it. Everyone should keep in mind that flood plains are not always accurate. They’re only estimates of what it would take to flood that area.”

Even though these are still early days—when we spoke, only 2 weeks have passed—Healy, whose home thankfully escaped damage, already has advice to pass on to his colleagues so they can more easily prepare for and navigate a future natural disaster.

Beyond flood insurance, Healy highly recommends business interruption coverage, which can cover your expenses in instances where your business can’t operate—for example, as the result of flooding. Second, Healy champions the importance of a professional network in times like these.

Top, a consultation room before the flood, Below, the aftermath of the flooding. All photos courtesy of Ian R. Healy, DDS, MDS.

“Be involved in the orthodontic community,” he says. “Nobody understands how to overcome issues that your practice will face as much as your colleagues do. Fellow orthodontists are our greatest advocates and probably our best safety net.” And as far as Healy is concerned, social networks like Facebook offer an incredible opportunity to engage and connect with that community.

Case in point: Healy, who is a member of a number of orthodontic Facebook groups, has received tremendous support from both the OrthoPreneurs and Orthodontic Pearls Facebook groups. In the days after Harvey, Healy posted pictures of the damage and a brief explanation of what happened to both groups. He was looking for advice from anyone else who’d been through something similar and maybe some help securing used equipment. From the OrthoPreneurs post alone, at least 30 orthodontists reached out  personally—via phone calls and texts—to see what they could do. Even more responded directly to the Facebook posts. Some offered equipment, including chairs and an x-ray machine. As a result of the Orthodontic Pearls post, Brian C. Anderson, DDS, MS, the Utah-based orthodontist who founded the group, and whom Healy has never met in person, set up a GoFundMe page to help him rebuild.

What Comes Next: A Checklist

If you stop to think about it, what you need to recover from a natural disaster is very similar to what you need for a practice transition. As Keith Dreyer, vice president of Henry Schein Financial Services, puts it, both require you have up-to-date information about your practice at your fingertips. As for actually tackling rebuilding, well, that process will feel much like when you started your first practice: It comes down to a vision and a plan.

But between preparedness and rebuilding comes the shock and the worry about what comes next. To help on that front, Henry Schein runs a disaster relief hotline year-round for customers experiencing operational, logistical, or financial issues. What’s more, the company has published its Recovery Guide for Office-Based Practitioners on its website. The guide offers a quick checklist of first steps in the days following a natural disaster.

“[Brian] contacted me and told me he was going to start a GoFundMe page,” Healy recalls. “I didn’t really have any expectations for that. I don’t really feel comfortable asking for help or for money.” Within 2 days, donations exceeded Anderson’s $50,000 goal.

“So while social media gets a bad rap, and certainly can be a waste of time, in terms of networking with our colleagues, it’s been an invaluable resource,” Healy adds.

Healy also advocates contacting the AAO as they offer disaster relief grants up to $5,000. “Every little bit helps when something like this happens,” he points out. In addition, Healy encourages close ties with your alumni organization. “I’ve always known that I had a family at the University of Tennessee,” he says. “The alumni are readily available to us younger doctors and always willing to help. However, I didn’t realize how much support I had until I truly needed them.” Since Harvey, his alumni association has raised over $30,000 to help him rebuild. In addition, an alum who practices in Michigan is shipping Healy replacement chairs and side units for free when his practice is up and running.

A number of orthodontic supply companies have also offered help. Even though he is a new member of the orthodontic buying group Mari’s List, the company’s owner Mari Sawtelle Dunn reached out to him to see how she could help. She put him in touch with several suppliers who are working out a plan to help Harvey victims, and she waived his first year membership dues. In addition, Reliance Orthodontic Products Inc, American Orthodontics, and Renew Digital have all reached out to offer help.

And then there is the support that can be found in the local community. A number of area dental professionals have offered to let Healy work out of their offices, including fellow Kingwood orthodontist Joe Richards, DDS, who not only opened the doors of his practice to Healy 2 days a week, but also is letting him use the office’s supplies and equipment. Moreover, Richards’ staff is coming in to help Healy and his team adjust to their new surroundings. “Dr Joe Richards is a really stand-up guy. He’s been so gracious to us,” says Healy. “Because of him we will be able to see patients. It won’t be a full week, but 2 days a week will be enough to keep the practice going as long as it takes to rebuild.”

A look at a work area in Healy’s office before and after the flood. All photos courtesy of Ian R. Healy, DDS, MDS.

In the end, the most important advice Healy has for anyone who finds themselves a victim of a natural disaster is to not succumb to the panic or desperation of the moment. “When something like this happens, you have to work through it and realize that there’s going to be a way out. So far, what’s helped me is to stay busy and keep focused on the individual tasks rather than the whole bleak picture. And it’s been good for me to realize that sometimes you have to be open and ask for help. There are going to be times in life when we all need it, no matter how self-sufficient and independent we are.” OP 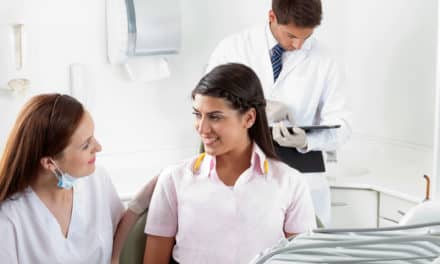 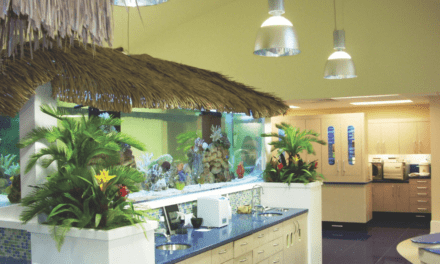 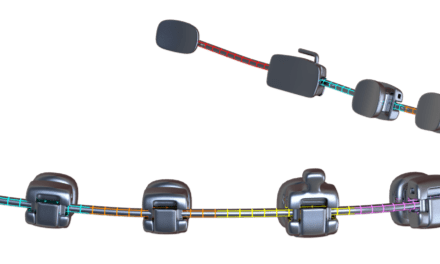