As orthodontists, why should we be concerned with stem cells? Will stem cells have an impact on orthodontic practice? To answer these questions, you need some fundamental knowledge about stem cells and their potential applications in dental, oral, and craniofacial regeneration.

Stem cells are master cells that are capable of differentiating into specialized cell lineages. They are usually quiescent, but periodically they replenish themselves, in a process known as self-renewal or cycling, to maintain a stable stem cell pool.

HSCs reside in the bone marrow along with MSCs. It is widely believed that MSCs, along with osteoblasts, serve as stromal cells for HSCs. HSCs give rise to and replenish different blood cell lineages. HSCs have long been used in bone marrow transplants. Osteoclasts—bone-resorbing cells that are active during bone turnover and orthodontic tooth movement—derive from the hematopoietic lineage, whereas osteoblasts and odontoblasts typically derive from the MSC lineage.

Most craniofacial bones, with the exception of the cranial base, are formed by intramembranous ossification, or deposition of bone matrix by osteoblasts. Tooth development, however, requires a complex cascade of signaling interactions between oral epithelium and the underlying ectomesenchyme.

Stem cells from apical papilla (SCAPs) reside at the apical end of immature permanent teeth whose root formation is not complete. When transplanted in immunocompromised mice, SCAPs form a dentin-pulp complex similar to dental pulp stem cells. Periodontal ligament stem cells, when transplanted in immunocompromised mice, give rise to cementum- and periodontal-ligament-like structures.

Craniofacial tissue engineering research has been going on since the discovery of the self-renewing and multilineage capabilities of stem cells in the early 1990s. However, there are obstacles to the adaptation of cell-delivery-based tooth regeneration. Autologous embryonic tooth germ cells are inaccessible for human applications. Embryonic tooth germ cells from nonhuman species may elicit immunorejection and tooth dysmorphogenesis. Autologous postnatal tooth germ cells (such as third molars) or autologous dental pulp stem cells have limited availability. Regardless of the cell source, cell delivery for tooth regeneration encounters translational barriers. The cost of commercialization and difficulties in regulatory approval have precluded, to date, any significant clinical translation of tooth regeneration.

Cell homing, the recruitment of local cells including stem/progenitor cells, is a new concept in tissue regeneration. By using bioactive molecules, certain desired types of cells can be recruited to the defect. These cells then lay out the extracellular matrix. Recently, a study used an anatomically shaped polymer scaffold tooth infused with the bioactive factors SDF-1 and BMP7. These bioactive factors recruited cells into the scaffold, resulting in a newly regenerated periodontal ligament that integrated with native alveolar bone orthotopically in an in vivo rat model.

What about tissue engineering in conjunction with orthodontic treatment? Teeth have been shown to successfully move into areas where bone is augmented with different kinds of materials such as ß-tricalcium-phosphate, hydroxyapatite, bovine bone graft materials, PGLA/gelatin sponges with BMP 2, and bioglasses. Allografts in combination with different materials, such as bioglass or enamel matrix derivatives, have also been demonstrated to achieve augmentation of alveolar defects before tooth movement into the area. A collagen bovine bone mineral (bio-Oss) has also been used for augmenting periodontal defects with a subsequent successful orthodontic tooth movement.

You can find and read all of the articles in our series “The Future of Orthodontics” by .

There are at least two case reports of accomplished orthodontic tooth movement into tissue-engineered bone where there have been alveolar cleft defects treated with a synthetic alloplast or hydroxyapatite. Here, tissue engineering principles have been applicable in the craniofacial area, with the potentiality for normal function that could work in conjunction with orthodontic treatment. Although any of these new technologies need time to mature, we can predict that postnatal or adult stem cells can be manipulated to regenerate the same structures in adults.

When dental implants became practical, multiple dental specialties competed to deliver the treatments. When using stem cells for regenerative medicine becomes a therapy, dentists or even nondentists may try to become service providers. The orthodontic profession should be prepared for upcoming paradigm shifts in dental, oral, and craniofacial regeneration.

Nina Kaukua, DDS, is a postdoctoral reasearch fellow at the Karolinska Institutet in Sweden.

Jeremy J. Mao, DDS, PhD, is professor, Zegarelli Endowed Chair, and senior associate dean for research in the College of Dental Medicine at Columbia University. He can be reached at 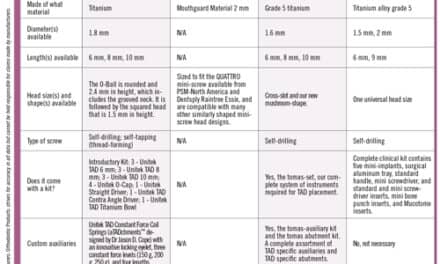