A review of orthodontic curing lights

Bonding orthodontic attachments to enamel became available to the orthodontic community in the early 1960s. Visible-light-cured adhesives, now used by the vast majority of orthodontists,1 were first described by Bassiouny in 1978.2 Numerous advantages, including almost indefinite bracket adjustment, increased bracket-placement accuracy, and better flash removal, have been cited as the cause of their popularity.3 Most of these composite resins utilize a photoinitiator, camphorquinone, which is activated by blue light in the 400- to 500-nm spectrum, causing polymerization to occur.4 There are other proprietary photoinitiators that cure at different wavelengths; this may restrict the selection of curing lights for operators who wish to use these products.

The History of Curing Lights

In 1991, argon lasers became available for curing dental composites. A highly concentrated, coherent beam of 488-nm wavelength, the peak wavelength for polymerization of the photoinitiator in most resins, is produced. This enables argon lasers to be low-powered yet effective in decreasing curing time. Dual-wavelength argon lasers are also available, which operate both at 488 nm for curing and 514 nm for limited soft-tissue procedures such as gingival recontouring and coagulation. Lasers are often highly regulated; local rules may restrict the operation of an argon laser, so be sure to check into your local laws before buying an argon laser.

In the mid 1990s, plasma arc curing lamps (Figure 2, page 22) were introduced as a more affordable, high-speed curing light. Plasma arc curing lights use xenon gas, distilled from liquid air. An electric current passing through the gas ionizes it and creates a plasma of negatively and positively charged particles. Extremely high-powered light is produced (2000 mW/cm2) and filtered to an effective curing wavelength of 450 to 500 nm.6

In 1995, Mills et al first described light-emitting diode (LED) lights for composite polymerization (Figure 3, page 22).7 These instruments use junctions of doped semiconductors to generate visible light.8 No light filtration is required, as the narrow spectrum of light output coincides with that needed for camphorquinone polymerization. 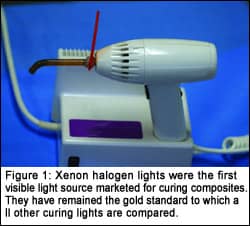 There has been considerable discussion about the relative bond strengths offered by the different curing-light options. Many in vitro studies have demonstrated that bond strength is comparable with most of the curing systems available,9–11 while it has also been suggested that plasma arc curing may offer superior bond strengths.12 The only published study comparing the clinical reliability of bonds by halogen, LED, and plasma arc lights revealed statistically similar bond strengths between the three lights13; no clinical trials have compared all four light sources. The distance of the light tip to the bracket can decrease bond strength. With increased distance, bond strength degrades more significantly with LED lights than with other curing lights; if access is difficult, a non-LED light source should be considered.14

Each of the curing lights produces a different light frequency and intensity, resulting in different curing times required for complete adhesive polymerization. With standard metal brackets, suggested curing times for a complete cure are 15 to 20 seconds on the mesial and distal of each bracket using a halogen light, 10 seconds mesial and distal for LED lights, 4 seconds mesial and distal using an argon laser, and 2 seconds mesial and distal with a plasma arc lamp. Ceramic brackets require half of the total time for each light type, and the light source should be aimed directly through the bracket. Molar bonds require about 150% longer curing times on each the mesial and distal. Recently, a new, high-powered halogen light was claimed to achieve ideal bond strength with only 6 seconds of cure time15; this certainly deserves further investigation. Camphorquinone, the most commonly used photoinitiator, is activated fully by all the light types with these curing times. Other proprietary photoinitiators can be activated with halogen lights, but the newer lights may not be able to achieve a complete bond with reasonable curing times.16 One company has incorporated accessory LED lights set at different wavelengths to overcome this limitation. When selecting curing lights and bonding agents, it is advisable to determine their compatibility.

Halogen, argon laser, and plasma arc lights all generate significant heat and require a cooling fan. All of these instruments therefore generate significant noise during and after operation. Although halogen lights have powerful fans to cool the unit, the intense heat does damage the light bulb so that the effective bulb life is only about 100 hours.17 The minimal heat generated by LED lights can be easily dissipated by heat sinks, and these lights can therefore operate noiselessly. Heat from curing units is transferred to teeth during bonding procedures; this can, at times, cause discomfort to patients. Although a damaging increase of pulpal temperature does not occur with any of the curing lights, halogen lights do significantly increase the pulpal temperature more than other light sources.18

The energy efficiency and minimal heat generation of LED curing give them many characteristics that the other sources do not have. Because they use minimal energy and do not need a cooling fan, LED lights are able to be marketed as cordless units with a rechargeable battery. And because they do not have any moving parts or light filaments, they better resist vibration and shock.7 As there is no heat damage to the diodes, LED lights are effective for more than 10,000 hours of use with little output degradation.19

Although their exact mechanisms are unknown, argon lasers uniquely restructure enamel-surface characteristics, conferring some demineralization resistance when used for bonding. This protection increases synergistically with the protection imparted by fluoride.20

Each of the various curing-light varieties has a different design. Plasma arc and argon laser curing lights are cumbersome and weigh between 9 and 15 pounds. Many owners of these lights mount the light on a rolling cart or dedicate a single chair for bonding procedures and leave the curing light there. Halogen lights occupy a small footprint and are often mounted chairside by each unit. Corded LED lights have similar space requirements to halogen lights, while their cordless counterparts can be left in any convenient location.

Due to material construction and market variables, there are significant cost differences between the different curing-light options. Halogen lights range from a few hundred dollars to more than a thousand dollars. LED lights start at about $600 and go upward of $1,400. Plasma arc lights cost between $1,600 and $2,300, and argon lasers cost more than $5,000.

Operators need to remember that all curing lights, conventional and high-speed, require adequate eye protection. Both the Center for Devices and Radiological Health of the US Food and Drug Administration22 and the Council on Dental Materials, Instruments and Equipment of the American Dental Association23 recommend wearing protective eyewear to filter harmful short-wavelength light. 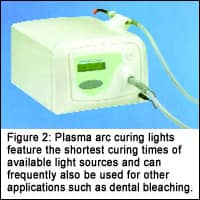 When selecting curing lights for an office, many variables need to be considered. Each practitioner needs to evaluate the infrastructure and patient flow of the office. Some orthodontists choose to have a light at each chair, while others are comfortable having one or two portable lights. The speed offered by plasma arc curing can be coupled with the portability of an LED light to move from chair to chair. Some practitioners choose to do extensive gingival recontouring, and a laser could provide both high-speed curing and hemostatic surgical potential. Other practitioners may object to fan noise and use LED exclusively. Armed with knowledge about each curing-light category, orthodontists can evaluate their unique practice style and select the appropriate light or lights.

Ari Y. Krug, DMD, is completing his orthodontic residency at Vanderbilt University in June and will be entering private practice in Lakewood, NJ. His areas of research have included curing lights, indirect bonding, distraction osteogenesis, dental bleaching, and chronic inflammation. He can be contacted at [email protected]

R. Scott Conley, DMD, completed his orthodontic residency at Vanderbilt University, where he serves as an assistant professor. He can be reached at [email protected] 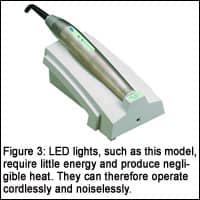 23. Council on Dental Materials, Instruments, and Equipment. The effects of blue light on the retina and the use of protective filtering eyeglasses. J Am Dent Assoc. 1986;112:533–5.