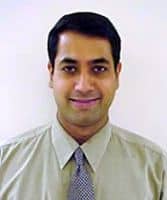 Every orthodontist uses retainers, but according to Manish Valiathan, DDS (pictured), a private practitioner and assistant professor of orthodontics at Case Western Reserve, “We found little written about the kinds of retainers prescribed and how compliant patients are in using them."

To fill this knowledge gap, Valiathan and fellow researchers embarked on three studies that examined which retainers are prescribed, how often patients actually wear them, and what happens when patients don’t wear them.

For the first study, researchers randomly sent 2,000 surveys to orthodontists throughout the country and got responses from 658 practitioners about the kinds of retainers they prescribe. The majority (58.2%) prescribed removable retainers, while about 40% opted for fixed lingual retainers.

The majority of orthodontists said they required wearing removable retainers full-time for the first 9 months after treatment and then part-time after that. They also encouraged part-time retainer use throughout life.

Another survey of 1,200 patients from four practices focused on patient compliance 2 years after retainers had been prescribed. Patients self-reported, and 36% responded to the researchers’ questions regarding type of retainer used, age, gender, length of time since braces were removed, and hours per day and night they wore their retainers.

The overall responses showed that 60% wore retainers more than 10 hours a day in the first 3 months and 69% wore them every night. By 19 to 24 months after debanding, 81% were still wearing their retainers—even if it was only 1 night a week. About 4% never wore their retainer at all.

Research indicated that many patients were still using their original retainers 2 years later—a sign that teeth had not moved, Valiathan said. Additionally, researchers found that age, gender, and the type of retainer did not impact compliance.

The third study was a pilot research project. It examined the ramifications of not using a retainer within the first 4 weeks after debanding. Researchers measured patients’ teeth before and after for spacing issues, overbites, underbites, and crowding.

Thirty patients had the wires removed from their braces but kept the appliances affixed to the teeth to monitor any changes without a retainer. Nearly half of the participants showed no movement, and many showed positive settling of the back teeth, including the molars. Some did require additional orthodontic treatment at the end of the 4 weeks.

“Further studies with a larger study population will let us know if some patients can go without using retainers,” Valiathan said.

He added that orthodontic researchers need to study what kinds of conditions require long-term retainer use.

For a complete list of companies that sell retainers, visit our Buyer’s Guide.

A Position of Strength