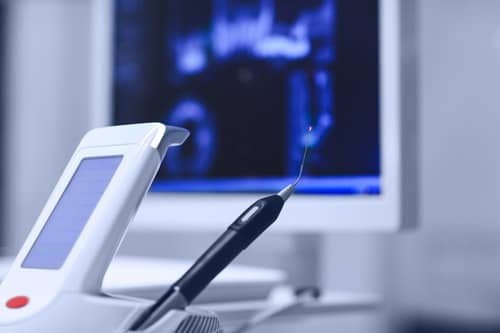 A randomized clinical trial found that use of low-level laser therapy (LLLT) was effective in accelerating orthodontic tooth movement (OTM) and reducing associated pain. The study, published in the journal Materials, focused on the user of a specific type of low-level laser, a diode laser.

The study’s authors treated 41 patients on one side of their mouth with both orthodontic traction and a diode laser and with orthodontics traction only on the other side. They reported significant differences between the two sides.

The researchers extracted the first upper premolars of the study participants (mean age, 13.4 years) as part of their orthodontic treatment, and then distalized 82 maxillary canines. To achieve space closure, the study participants underwent treatment with a nickel-titanium closed coil spring (from G&H Orthodontics) with a force of 50 newtons (N) on each side.

Under the study’s randomized, split-mouth design, the investigators treated study participants with a diode laser (Wiser Laser, Doctor Smile, Brendola, Italy) on the test side only at 810 nm wavelength in continuous wave mode at both the buccal and palatal sides on three points per side (distal, medial, and mesial) at baseline and then at days 3, 7, and 14. Treatment continued every 15 days until the space closed.

The researchers reported that mean space closure of the maxillary canines was similar between the treatment groups, although mean time to achieving space closure was significantly faster in the laser group (84.35 days) compared with the control group (97.49 days).

Additionally, average pain levels because of the orthodontic traction measured using the visual analog scale were significantly and consistently lower on the side treated with the laser

The study’s authors did note that their results have some limitations. As the patients were not blinded to treatment, they study design may have affected the results obtained, especially regarding the pain experience. Another limitation noted was that the tooth movement was assessed at 2-months follow up and further studies with longer follow up are needed to confirm this study’s results.

Root Beer May Be Safest Soft Drink For Teeth