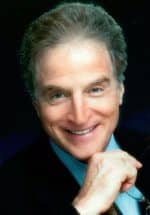 For more than a century, the controversy of treating tooth size/arch length discrepancies, with or without extraction of permanent teeth, has been at the forefront of diagnosis and treatment planning.1-6

So here we are at the beginning of the 21st century, back to a predominantly nonextraction approach—an approach that was discarded 70 years ago. What changes have taken place to influence our profession to such a degree? Certainly, our philosophy of treatment timing has changed radically. Instead of waiting for the completion of second molar eruption and missing the pubertal growth spurt, we generally believe that basal discrepancies are positively impacted when we use the greatest growth increments to our advantage. Beginning in the 1960s, and after encountering significant resistance for almost 15 years, extraoral appliances, such as headgears and functional appliances to temporarily redirect growth, gained widespread popularity and considerable support in the literature.7-16

That said, the management of nonextraction cases has seen the introduction of a plethora of appliances for both maxillary and mandibular (basal) discrepancies. When treating a Class II skeletal discrepancy in a growing patient, the clinician may have to rely on cephalometrics and facial analyses to discern whether a protruded maxilla or retruded mandible is the primary cause. Most cases do not present a clear picture as to which one is the primary cause, especially in a growing patient. 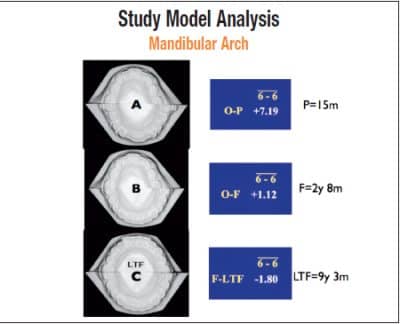 One camp of orthodontists uses mostly mandibular propulsive appliances to reposture the mandible forward and simultaneously redirect maxillary growth.17-22 This philosophy is somewhat similar to Angle’s philosophy more than 100 years ago. In denying the effectiveness of extraoral force, he relied on heavy Class II elastics to favorably influence growth.1 While providing positive orthopedic effects, side effects of this method include a displacement of the anterior teeth labially, which is true with any Class II system. If lower anterior teeth are upright, crowded, or procumbent to begin with, this appliance will further displace these teeth beyond the “neutral zone,” resulting in a significant long-term relapse. If lower incisors are initially recumbent, these appliances can certainly produce a positive result. Therefore, proper case selection is imperative.

Another camp uses extraoral forces such as headgears to redirect maxillary growth and allow mandibular growth to “catch up.”7,8,23 This method, while very effective, relies on patient compliance, and therefore the results will vary. Since the headgear is a maxillary arch appliance, the mandibular incisor position is essentially unaffected. Thus, one could argue that isolating the mandibular arch during Class II skeletal correction may have a positive effect on the long-term stability of mandibular incisor position.

This leads us to the treatment of tooth-size/arch-size discrepancies in the nonextraction case. In extraction treatment, significant crowding is corrected with the removal of permanent dental units—usually bicuspids. However, in the nonextraction case, the deficiency in arch length or arch perimeter is treated with expansion of the arch and/or interproximal reduction. Interproximal reduction is usually relegated to moderate discrepancies (2 mm to 4 mm), while greater discrepancies are treated with expansion.

Expansion, according to McNamara,24 can be subdivided into arbitrary categories such as orthodontic, passive, and orthopedic.

Top left are the original intraoral photos. Below that are 15-month progress photos after using only arch-development appliances. The photo at right shows the patient after 12 months of bracket therapy.

“Orthodontic” expansion could also be described as any “mechanical” expansion that employs brackets and archwires, finger springs, removable expansion plates, or quad-helix-type appliances. Generally, these devices tip the crowns labially and the roots lingually. If these movements violate the “neutral zone,” the surrounding musculature may provide an opposing force, leading to long-term relapse.25,59 To help retain the position of the crowns, the roots should be torqued underneath the crowns to establish the forces of occlusion through the long axes of the teeth. 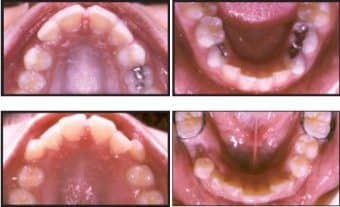 The original occlusal photos of the patient are on top, and the 15-month progress photos are on the bottom. 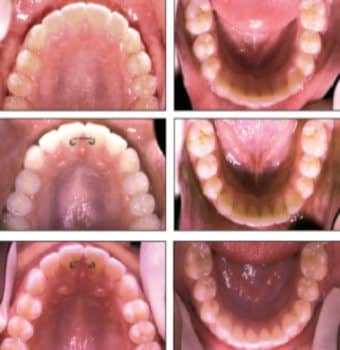 “Passive” expansion refers to the blocking of the labial and buccal musculature from the arches. When the orthodontist temporarily removes their influence on the teeth, a widening of the dental arches will frequently occur. This expansion is not produced via biomechanical forces, but rather intrinsic forces such as the tongue. Appliance examples include the lip bumper26,27 and the FrÄnkel appliance.28

“Orthopedic” expansion refers to changes that primarily occur in the underlying skeletal structures rather than the movements of teeth within the alveolus.29-34 Orthopedic expansion not only separates the midpalatal suture, but it also affects the circumzygomatic and circummaxillary sutural systems.35 New bone is deposited at the expansion site within 3 to 6 months to re-establish the integrity of the suture.30 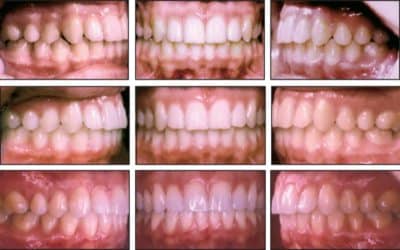 The original photographs (top) contrast with those taken 17 years, 10 months postretention. Retention consisted of a bonded lingual wire between the maxillary central incisors.

Orthopedic expansion, similar to orthodontic expansion, does not directly influence the opposing forces of the surrounding soft-tissue envelope. Thus, the general consensus of the orthodontic community, realizing the possibility of significant relapse, is to “overexpand” the maxilla to almost a complete buccal crossbite. The greatest efficacy of maxillary expansion, at both the skeletal and alveolar levels, is usually during the mixed and adolescent dentitions, prior to the pubertal peak of growth and development.

When comparing rapid maxillary expansion to “slow” maxillary expansion long-term, there were no clinically significant differences in anteroposterior and vertical maxillary changes36 or mandibular behavior.37 One adolescent dentition study initially used rapid maxillary expansion (RME) at one quarter-turn twice a day until the suture was determined to be opened from occlusal films (5 to 7 days). The screw was then turned three times a week until a 2-mm overexpansion was achieved (about 4 months). After evaluating the patient sample about 2½ years after retention, the dental and skeletal changes in the transverse dimension exhibited a high degree of stability.38 Their hypothesis was that slower expansion produced less tissue resistance and stimulated the adaptation process in the circummaxillary structures. These events would minimize any relapse tendency in the long term.

Maxillary expansive forces appear not to be restricted to intermaxillary sutures, but are also distributed to the sphenoid and zygomatic bones and other related structures in the craniofacial complex.39 Histologic studies on animals have also demonstrated signs of increased cellular activity at various cranial sutures.40-44 The available data on suture mechanics appears to have a common theme that mechanical forces regulate sutural growth by inducing sutural mechanical strain. Various orthopedic devices, including headgears, facemasks, and functional appliances, may induce sutural strain, resulting in a modification of natural sutural growth.45,46

Using the effects of expansion on modifying natural, sutural growth, several investigators have applied various headgears for the treatment of skeletal Class II and Class III malocclusions.47-54 Although studies have emphasized the importance of starting earlier in the growth cycle to gain a maximum effect,55-58 there do not appear to be any statistically significant differences between specific entry points in the growth cycle.49 With the exception of one investigation,49 most studies applied the headgears after the rapid maxillary expansion (at two quarter-turns per day) had been completed.47,50-52

The two photos on the left are the original intraoral images. The two on the right were taken 17 years and 10 months postretention.

Coordinated Arch Development® (CAD) is a term I introduced at the 1996 AAO scientific session, together with my partner of 30 years, Jerry Klein, DDS. It is a combined orthopedic/orthodontic approach to long-term stability, applied during periods of optimum growth and development. The approach is based on the following:

CAD distinguishes itself from expansion by the following;