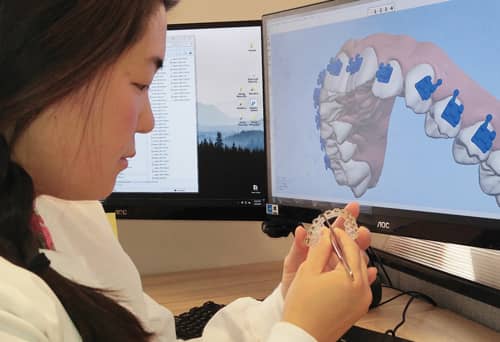 With Steven Gardner, founder and president of OrthoSelect

OrthoSelect is driving full speed into the future of orthodontics. Combining digital technology and 3D printing, the company, based in American Fork, Utah, chooses to specialize in offering customers innovative services, like its Digital Indirect Bonding System (DIBS). Orthodontic Products talked to Steven Gardner, founder and president of the company, to find out how DIBS will make indirect bonding work for orthodontists the way it was intended.

Steven Gardner: Growing from a small local lab during the mid-2000s to producing over 10,000 digital study models per month required us to become skilled at developing better and faster systems. We had to innovate our own proprietary methods and software. As we’ve grown, our focus on digital products has led to other related services, such as 3D-printed models, virtual diagnostic setups, and most recently to our Digital Indirect Bonding System, or DIBS for short.

We maintain a fairly narrow focus in the orthodontic lab industry. Rather than spin our wheels providing everyday old school products, our mission is to revolutionize a few key services by combining innovative ideas with cutting-edge technology.

As mentioned, our mission naturally led us to indirect bonding (IDB), which had been languishing for years. I think everyone would agree, the overarching idea of IDB is perfect: to precisely bond multiple brackets simultaneously. Yet technology has always lagged a few paces behind the concept; and creating trays, in practice, has always been an unwieldy and imprecise process. It’s a new day, however, and we are excited about our Digital Indirect Bonding System, which incorporates our digital software and 3D printing. In our estimation, we’re right at the intersection of technology and interest level. Doctors are catching on that we’ve finally reached a point where indirect bonding can actually work the way it’s intended to, and can realistically be adopted as the standard method for accurately bonding brackets.

OP: How does DIBS work?

Gardner: First, doctors submit their cases to OrthoSelect in the form of a PVS impression, a stone model, or an intraoral scan. Then, using our software, technicians place all the brackets virtually on the patient’s teeth, based on the doctor’s prescription. The case is then uploaded to the doctor for approval. Our DIBS software allows the doctor to check and fine-tune the placement of each bracket before giving the thumbs-up to our lab. Once we have approval, our technicians digitally render our patent-pending trays and then 3D print them into physical form. Finally, we load the brackets into the trays and ship them directly back to the doctor.

OP: What are some of the features of DIBS that set it apart?

Gardner: First, the fact that we’re using extremely precise 3D-rendering software to place the brackets sets us apart. This is something that the vast majority of labs cannot do. Most still draw pencil lines, then make their best educated guess for placing brackets by hand on a stone model. Contrast that with our bracket-placement software, which can literally measure and place a bracket to within a 1-micron tolerance.

A second great feature is our End-of-Treatment Simulation: It runs a rectangle wire through the brackets and aligns the teeth by the torque of each bracket. This allows the doctor to easily see how the teeth will align with the brackets bonded in their current location. If doctors choose, they can adjust each bracket and see immediately what the end result will be. It’s a great tool for doing finishing work at the beginning of treatment rather than at the end. Our current doctors seem to really appreciate this ability.

A third feature that sets us apart (and this is a big one) is that we can literally work with any bracket type or bracket brand. If a particular bracket set is not already in our digital library, then we can scan and digitize them for use in our software. The specialized equipment we use to convert and digitize a bracket set is extremely sensitive and is able to replicate a bracket down to the micron. This is a great benefit because there is no forcing doctors into switching to some cheap bracket set that they have no desire to use.

Here is where we really stand out: Our indirect bonding trays are 3D printed, rather than created using an archaic vacuum-form machine. Why is that significant? 3D printed trays are what we regard as no less than the Holy Grail in IDB. By printing the trays, rather than vacuum forming them, we achieve a flawless fit over the teeth, with the brackets held in absolute perfect position. This is because the trays go straight from the perfectly placed brackets on the screen, directly to a perfectly printed tray that has an accuracy rate of a few microns. 3D printing also enables far fewer steps, so less human error. Here I must mention, DIBS has taken years of research and development, aided greatly by some generous and helpful doctors. We are truly indebted to them and are very grateful for their enthusiasm and excellent feedback.

Lastly, another phenomenal feature is the patent-pending composition of our trays. This not only enables them to accurately fit and grip each bracket, but the composition also allows for the tray to flex when releasing the brackets after bonding is complete. This is really the key to the whole thing. After all the technology and process in the background, doctors just want it to work when it’s time for bonding.

OP: How does DIBS’ 3D-printed tray translate into “a more effective bonding”?

Gardner: Now we’ve gotten to the crux of the whole matter. To answer this, first let’s look at how IDB has always been done. For years, indirect bonding trays have been constructed using the vacuum-form or “suck-down method” (I call it the traditional method), which is a very technique-intensive manual process. This method literally “sucks.” It employs physical plaster models, hand-measuring, and a lot of human eyeballing. With each physical step in the traditional process—creating the model, measuring, placing brackets, vacuum-forming the soft and hard layers—there are variables and a lot of room for human error to leak into the process. Each step compounds any errors introduced in the previous step. This is why indirect bonding until now has been, at best, inconsistent and, at worst, a failure. Now, we have some competitors using software to place the brackets digitally too, which is of course a big improvement over manually placing them; but then their digital model is printed and used to produce the trays the old-fashioned vacuum-form way. So whatever precision was created within the software is then lost incrementally as the tray is created manually. Our system, DIBS, is the only system we’re aware of that digitally places the brackets and then 3D prints the bonding trays. The beauty of our 3D-printed tray is there’s nothing lost in translation, because there’s no human intervention. Once the doctor approves the bracket placement, the tray is digitally created within the software. It conforms to the teeth and brackets exactly. There are no pencils or handheld gauges; no unintended gaps or air pockets. When the 3D printer goes to work, it prints exactly what has been created on the screen. So the precision in the software carries through directly to precision in the tray.

We’ve noticed that doctors are sometimes skeptical of DIBS, because, with indirect bonding’s history, they just don’t have faith that anything could actually be more accurate and work better than the trays they’ve experienced in the past. This is what’s fun for us. We’re so confident that doctors will be impressed, we don’t charge for anything—not the software, tutorial, or first case—until a doctor is satisfied and orders his/her second case.

OP: What do you think will be the next big thing in orthodontics?

Gardner: I hope this doesn’t sound too egocentric, but I think what we’re doing—the combination of digital and 3D printing—is the next big thing. The revolution that is happening in orthodontics right now is digital—finding new ways to digitally capture and utilize patient information for treatment. 3D printing will grow proportionately with digital. As technology and 3D materials continue to improve, we’ll innovate better, faster, more accurate ways to create implants, appliances, even new treatments we haven’t contemplated yet. I envision a day when a doctor will scan a patient’s mouth, plan the treatment, and print the appropriate appliances all within his/her own office, and during a single appointment. That would be cool and we hope to be a big part of that future. It’s an exciting time to be in the field of orthodontics. OP