Coming out of retirement was the best business move William W. Thomas, DDS, MS, PA, ever made 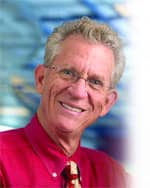 Faster than he could say, “Play me another round of checkers,” William W. Thomas, DDS, MS, PA, realized his retirement from practice in 1994 was a huge mistake.

He was bored, restless, and generally wasn’t enjoying life very much. So, just a year after heading off into the sunset, Thomas exchanged the rocking chair on his front porch for a hydraulic-lifted, cushioned, faux-leather patient seat in a small, Naples, Fla, office and got his game back.

Thomas’ orthodontic practice is bigger and better than ever the second time around, and he couldn’t be happier.

“I have no plan to reretire,” says Thomas. “I just don’t get the feeling I’m ever going to stop being an orthodontist again. I need a purpose and a mission. Orthodontics is it. As long as I can see and my hands don’t shake, I’ll still be doing this. It’s too much fun not to.”

One of the factors that contributed to Thomas’ desire for a comeback was a profound sense of loss.

“It took me such a long time to learn how to be successful at orthodontics and to perform with flair, that it seemed a shame to be setting it aside,” he says.

Thomas feared, too, that the fate that befell many of his retired friends would also visit him.

“I knew too many people who retired and in no time at all were dead,” he says. “It’s almost like they’d lost their reason for living.”

Particularly appealing about a return to work was being able to start anew, armed with the knowledge of how to avoid past mistakes. As such, the practice Thomas owns today is in many ways a marked improvement over the one he had previously. For example, his former practice was heavy on pens and paper; his new office has high-tech systems occupying every nook and cranny.

“I’ve become cutting-edge,” he says. “I realize that’s a bit unusual for a senior orthodontist. Normally, practitioners who’ve been at this as long as I have tend to be settled and old-fashioned. What’s helped me break the mold is to keep in mind that my goal is to never stop looking for new ways to do a better job for the patient. In fact, my entire philosophy is patient-centered. I’d sum it up this way: Never hurt the patient, never embarrass the patient, never blame the patient. The only way this philosophy can be fulfilled is by getting out on the cutting edge and staying there.”

Thomas’ philosophy also explains his preference for bonding rather than banding.

“In the old days, I banded wall-to-wall,” he says. “Now, I bond everything. But before I do, I get the teeth really clean, then make sure the braces are placed exactly right. It’s for that reason my office has very few loose braces.”

Some things haven’t changed, however. Now as then, for instance, Thomas still takes enormous pride in the meticulousness of his work.

“I’m really careful about cleaning up the composite flash from around the braces after they’re put on,” he says. “I wear magnifying telescope glasses when I work so that I can get a really clear, close-up look at what’s going on. I don’t rush through the cleanup, either; that way, I’m sure not to leave any composite behind. Consequently, we have far less incidence of irritated gum line, which means the kids have a far, far easier time with hygiene.” 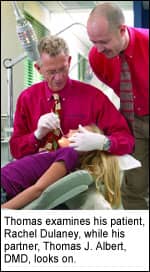 When all was said and done, Thomas’ decision to unretire turned out to be as easy as the one that sent him into orthodontics in the first place. That chapter of his life began just before Thomas—born in Riverside, Calif—entered college. At the time living in Missouri, he had chosen a career in dentistry, inspired by a friend’s father. Following a hitch in the Navy as a dental technician, Thomas moved back to Southern California and enrolled in junior college there. He later transferred to California State College (now California State University) in the city of Long Beach. Upon completion of his undergraduate studies, he was accepted into the dental program at Loyola University in Chicago.

The more he learned about how to be a dentist, though, the less he wanted to be one. Thomas shared his growing disaffection for dentistry with a close friend, who happened to be a first-year resident in the orthodontics department at Loyola. The friend was sympathetic and extended an invitation to visit his corner of the school for a fresh perspective. It took just one evening’s worth of perusing charts, checking out models and hearing the stories of happy patients to convince Thomas that orthodontics was right for him.

In 1966, Thomas completed orthodontic training at Loyola and made his way back to Southern California, where he entered practice in Bellflower, a Los Angeles suburb not far from his Long Beach alma mater.

A few years later, his wife, yearning to escape the smog and congestion, persuaded Thomas to move to Fort Bragg, a small coastal community well north of San Francisco. Unfortunately, the town was too sparsely populated and far down on the per-capita income ladder for him to make a living there as an orthodontist, so he held onto his Bellflower office and commuted roughly 600 miles. 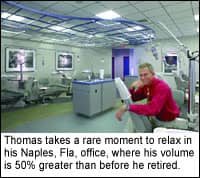 “To do this,” he says, “I bought a small, six-passenger, 200 mph, turbocharged, single-engine airplane and learned to fly. I spent the majority of each week in Bellflower, then the remainder of days in Fort Bragg.”

Eventually, he opened an office in Fort Bragg to serve the few residents who could afford orthodontic care. It was situated on Thomas’ 10-acre spread, a former chicken ranch. Lights were on in that office just 1 day a week and, at its peak, it accommodated no more than 100 active patients.

Thomas continued this split-state mode of practice for a decade (during which time he logged more than 3,000 hours in the air) before calling it quits in Fort Bragg. He then made his home exclusively in the southern half of the state. Freed of the second office and the plane commute, he concentrated on expanding the Bellflower practice.

Thomas sold that much-enlarged enterprise in 1993, but remained aboard until the middle of the following year to help the new owner make a more successful transition. After that, Thomas hung up his lab coat and moved to the Gulf Coast of Florida.

For Thomas, retirement should have meant having the time of his life. Instead, it was more like his life was the having of time—too much of it, actually.

“I hung around the house all day and drove my wife crazy,” he chuckles. “Finally, she couldn’t stand it anymore and suggested that maybe I should go out and look for a job. Maybe someplace like Home Depot would hire me, she’d say.”

Nix to that, Thomas recalls thinking.

One problem, though. Obtaining a license to practice in Florida wouldn’t be a walk in the park.

“Florida didn’t care about my years and years of experience as an orthodontist; they just wanted me to prove to them that I could do dentistry,” he says. “But because I was from out of state and it had been longer than 10 years since I’d been in school, they made me retake the national dental boards, plus the Florida boards. I was pretty nervous about that because they were going to ask me things I hadn’t had to consider in ages, such as injections and filling cavities and root planing. And, of course, everything had changed since I was in dental school.”

Up to the challenge, in 1995 Thomas passed the boards to get his Florida license. He then bought a Naples practice.

“It was a small one that saw patients every other Friday and was situated within a pediatric dentistry office,” he says, adding that his plan called for slowly building the practice to the point where his services would be needed once, but not more than twice, a week.

Of course, everyone knows what happens to the best-laid plans. Shortly before Thomas took over, the pediatric dentist cashed out. The buyer of the pediatric office was a young, ambitious practitioner who welcomed Thomas’ continued association, and told Thomas to—pardon the pun—brace himself for a sharp rise in referrals.

“Before I knew it, my practice took off like mad,” Thomas recalls.

So phenomenal was the growth in both Thomas’ and the pediatric dentist’s offices that the two were soon crowding each other. In 1997, Thomas opened an office in a 1,500-sq-ft space of his own. The practice continued to grow, eventually compelling him in 2002 to buy a 3,000-sq-ft office condo—the home of his practice today.

“My volume in Naples is at least 50% bigger than at any point when I was in California,” he says, adding that he’s not surprised by it. “I’m pathologically overconfident, so it never occurred to me that my return to practice might not work out. My personality makeup is such that I just naturally figured I’d do as well or better this time out.”

The office, done up in chrome and black, exudes an image of sleek modernity. Here and there, however, are echoes of times past—namely antique clocks, of which Thomas is an avid collector.

“Only a few of my clocks are on display in the office,” he says. “You have to come to my house if you want to see the full collection. I haven’t loaded up my office with them because, while I might find antique clocks an interesting hobby, I don’t think many other people share my enthusiasm, so I tend to keep it to myself.”

Thomas started collecting 30 years ago. A history buff at heart, he says he enjoys old clocks because they represent a link to bygone eras and provide a window to the cultural tastes of people who lived long ago.

Meanwhile, his operatory contains seven chairs in an open-bay configuration, and the practice includes a support staff of nine.

About a year after opening the present location, Thomas brought aboard an associate, a then-recent graduate of NYU, Thomas J. Albert, DMD. At the start of 2005, Thomas elevated Albert to equal partner.

“I’ve never before had a partner,” says Thomas. “I took one on because I felt it would provide a better foundation for growth.”

Thomas works 4 days a week, the same schedule he maintained at the zenith of his Golden State experience. Yet, as he’s grown older, Thomas realizes more and more how precious a commodity time is, so he tries hard to be a good manager of the minutes and hours that make up his day. He accomplishes that by making efficiency king with the help of extensive automation and, whenever feasible, delegation of responsibilities.

“Time management is especially important for me, because I like to lavish attention on patients while they’re in the chair,” he says. “I want patients and parents to feel that they’re being well-served from start to finish.”

Good management of time is important for other reasons as well, including leaving more hours for his family.

“I want to be there for my kids,” says Thomas, the father of seven children (four are grown and living out West; the remainder are still school-aged).

One way he’s there for them is by taking the family on snow-skiing vacations in the Rockies once each winter. At other times of the year, Thomas packs the gang aboard his 22-ft runabout to tour the Gulf Coast’s back-bays or to fish in open waters. Though he enjoys these moments of leisure, the last thing on Thomas’ mind is reretirement.

“I’m contractually obligated to remain in the practice for a number of years yet. At the end of that time, my partner has the option to buy me out and then hire me as a full-time or part-time employee, whatever he needs.

“I’ll be here to meet those needs. That you can count on,” says Thomas.

Rich Smith is a contributing writer for Orthodontic Products.