The use of lasers in dentistry has grown at a significant rate during the past few years. Because of their many advantages, lasers are indicated for a wide variety of intraoral procedures. Simultaneously, orthodontists around the world have embraced an increased emphasis on treatment efficiency and delivery of optimum aesthetic results.

With this in mind, it is proposed that increased use of the diode soft-tissue laser as an adjunct to orthodontic treatment will become commonplace in the future, as orthodontists become increasingly aware of its many benefits.

The word “laser” is an acronym for “light amplification by stimulated emission of radiation.” The concept has its roots in several basic principles of physics first described by Albert Einstein in 1917.

In 1960, the first laser to use visible light was developed by a physicist, Theodore Maiman, PhD, using a ruby gemstone as the lasing medium. In 1961, this was followed by another crystal laser using a neodymium-doped crystal of yttrium, aluminum, and garnet (Nd:YAG). Then in 1964, two gaseous lasers were invented, one using carbon dioxide (CO2) as a lasing medium, and another using argon.

In 1968, the CO2 laser was used to perform soft-tissue surgery for the first time. Since then, an increasing variety of laser wavelengths, as well as general and surgical indications, have evolved. In 1997, the US Food and Drug Administration (FDA) approved a well-known laser, the erbium:YAG (Er:YAG) laser, for use in hard-tissue surgery. Most recently, in 1998, the first diode laser using a gallium, arsenide, and aluminum lasing medium was approved for use in soft-tissue surgery.

Laser energy is different from ordinary light in several distinct ways. First, it is monochromatic, or composed of a single wavelength (color) of light. Second, laser light is collimated, which means that the beam size and shape emitted from a laser is constant and can be very finely focused. And lastly, a laser produces coherent light waves that are physically identical—all in phase with one another, with identical amplitude. On the other hand, ordinary light, like the type produced by a household lamp, is made up of multiple colors, amplitudes, and wavelengths, and is not coherent or well-focused. Thus, a laser produces a monochromatic (though sometimes invisible), collimated, and coherent beam of intense light energy that can help you accomplish a variety of intraoral treatment objectives.

The light energy from a laser can have four different interactions with a target tissue, depending on the composition of that tissue. The first is reflection, which simply means that the beam is redirected off of the surface, having no effect on the target tissue. The second is transmission of the laser energy directly through the tissue, also having no effect. The third is scattering of the laser beam, which weakens the intended energy and may result in no useful biological effect. Scattering can also cause heat transfer to the tissue adjacent to a surgical site, resulting in unwanted damage. The fourth and most desirable interaction is absorption of the laser energy by the intended target tissue, creating a photothermal event.

When target tissue containing water is elevated to a temperature of 100° C, vaporization of the water within the tissue occurs—a process called ablation. Since soft tissue is composed of a very high percentage of water, excision of soft tissue commences at this temperature. 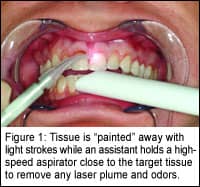 The diode laser is a solid-state semiconductor laser that typically uses some combination of gallium, arsenide, and other elements such as aluminum and indium to change electrical energy into light energy. It delivers laser energy fiber-optically in continuous and gated-pulse modes. During most procedures, the fiber, with sizes ranging from 200 microns–600 microns, is applied in light contact with the target soft tissue for ablating, incising, and excising procedures. In continuous-wave mode, the laser beam is emitted continuously as long as the device is activated; while in the gated-pulse mode, there are periodic alternations of laser energy achieved by the opening and closing of a mechanical shutter in front of the beam path of a continuous-wave emission. Diode lasers utilize invisible wavelengths in the near-infrared area of the electromagnetic spectrum, and therefore are equipped with a separate aiming beam to show the operator the exact spot where the laser energy is being focused.

Advantages of the Diode Soft-Tissue Laser 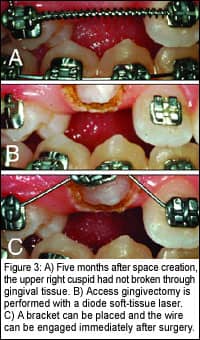 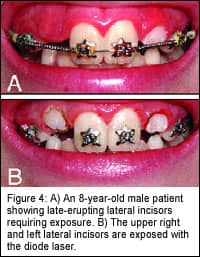 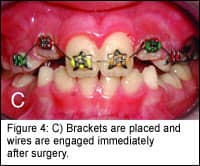 The diode soft-tissue laser is known for its ability to cut and coagulate gingiva with virtually no bleeding or collateral damage to healthy tissue. In most cases, a topical anesthetic is sufficient for a pain-free procedure. Because of the diode soft-tissue laser’s surgical precision and ability to create a sterile environment as it works, there is little or no postoperative discomfort and a short healing time. In addition to being an excellent soft-tissue surgical laser, the diode laser is compact, portable, and easily moved with minimum setup time. It is also the lowest-priced surgical laser available today, with costs as low as $8,000.

The Diode Soft-Tissue Laser and Orthodontics

With an ever-increasing emphasis on both efficiency and aesthetics in orthodontics, the diode soft-tissue laser is a powerful addition to the orthodontist’s armamentarium. Clinical indications for use of the diode soft-tissue laser during orthodontic treatment include selective access gingivectomy to allow the bracket to be placed earlier in treatment and/or more precisely, thus reducing both the number of appointments and the overall treatment time. In cases where the frenum needs to be released, the laser can be used to perform this procedure in minutes. Gingivectomy for tissue hyperplasia can greatly improve tissue health and appearance, and can also facilitate improved oral hygiene. And aesthetic gingival recontouring can make a significant contribution to the overall final result.

The diode soft-tissue laser demonstrated in this article is about the size of a large toaster, weighs only 7.5 pounds, and is extremely portable. The unit is turned on by a key, and it is ready for use almost immediately. A number of laser settings, including power output and wave mode, are easily entered via a touch screen. The laser handpiece with its offset, disposable tip is attached to the main laser unit by a thin, flexible fiber-optic delivery system.

Between patients, the 400-micron lasing fiber is disinfected and the tip is cleaved  in order to remove2 mm–3 mm of old fiber and expose fresh fiber.

The patient, staff, and any observers wear wavelength-specific eye protection to guard against potential eye damage from direct or indirect radiation emitted from the laser.

After the selected power settings are entered (typically 1 watt, continuous wave), the laser is activated via a foot pedal. One important rule advocated by the Academy of Laser Dentistry (Coral Springs, Fla) is to always use the least amount of power needed to accomplish the necessary treatment objective. This reduces collateral tissue damage, speeds healing, and decreases postoperative discomfort.

Generally, it is essential that the fiber be initiated prior to surgical use. This process, also called conditioning or priming, involves deposition of a thin layer of dark pigment on the end of the fiber, producing a concentration of thermal energy at the tip. One of the easiest ways to accomplish this is to gently tap the fiber tip once or twice on articulating paper while the laser is energized.

Prior to laser surgery, the target tissues are anesthetized with a unique compounded topical anesthetic gel made up of Tetracaine (4%), Phenylephrine (2%), and Lidocaine (20%). The combination of the two local anesthetics has a profound anesthetic effect, while the Phenylephrine promotes local homeostasis to decrease systemic absorption and prolong duration of action. Peak anesthesia occurs within 6 minutes and lasts a minimum of 20–30 minutes.

Ordinarily, when tissue is to be removed, the tip is held in light contact with the tissue, and the procedure is performed with light, sweeping “brush strokes” while the assistant holds a high-volume suction unit near the tissue to evacuate any laser plume and odor, and to cool the target tissue (Figure 1).

The tissue should appear slightly brown, not charred black. There is rarely any bleeding or discomfort, since the blood vessels and nerve endings are sealed while the tissue is removed.

Following the procedure, the patient is given an ultra-soft toothbrush and postoperative instructions: Take an over-the-counter analgesic for mild pain if needed, keep the area clean, and expect some minor bleeding from the site for the next few days. Healing takes place in 4–5 days, and the patient is seen for postoperative evaluation in about 2 weeks.

The soft-tissue diode laser has a wide range of practical uses in orthodontic treatment. Here is a brief summary of several of them.

Aesthetic gingival recontouring: In many instances, uneven or excessive tissue levels are noted at the completion of orthodontic treatment, and are especially unsightly when seen in the upper anterior teeth. Contributing factors include distance of tooth movement, root positions, hormonal changes, periodontal response, and poor oral hygiene.

Recontouring the gingiva once the usual postdebanding swelling has subsided can create a more pleasing smile and improved periodontal health.

Access gingivectomy (Figures 3 and 4, pages 90-92): Late-erupting and slow-erupting teeth are a common killer of efficiency in the orthodontic office. Consequently, one of the most common uses of the diode soft-tissue laser is for the judicious removal of tissue covering unerupted teeth, to allow more precise bracket placement earlier in treatment.

Frenectomy: Simple frenectomies, both in the upper arch and sublingually, are well within the capability of the diode laser. In most cases, an increased power setting of 1.5 W is used to cleanly ablate the fibrous strands in the frenum attachments.

Gingivectomy of hypertrophic tissue: Hypertrophic tissue can swell around orthodontic brackets, inhibiting hygiene and slowing tooth movement. In many instances, even a meticulous oral health care regimen is not enough to make this excess tissue recede. The diode soft-tissue laser can quickly and easily remove swollen tissue without undue patient discomfort. Gingivectomy for tissue hyperplasia can improve tissue health and appearance, and facilitate better oral hygiene.

As orthodontists become increasingly focused on both efficiency and aesthetics, new tools such as the diode soft-tissue laser are becoming available. Clinicians are finding that soft-tissue ablatement is a surprisingly simple procedure involving a single appointment, a topical anesthetic, and little or no pain or bleeding. Advantages of diode laser therapy in orthodontic treatment include reduced treatment times, greatly enhanced aesthetics, and an enhanced “high-tech” image for the practice. z

Stephen Tracey, DDS, MS, is in private practice in Upland, Calif. Tracey is a member of the AAO, the World Federation of Orthodontists, and the Academy of Laser Dentistry, with proficiency certification in both the diode and Er:YAG lasers. He is an internationally recognized lecturer, with past presentations made in 15 countries on six continents. He has published numerous articles in a variety of professional publications. He can be reached at (909) 981-8789 or [email protected]