Biolase Technology Inc, a dental laser company, has been granted two US patents for technologies that enhance the functionality and usability of the company’s Waterlase MD all-tissue laser system.

The first patent covers laser delivery technology for ablating tissue while simultaneously providing visual images of the target tissue using an integrated camera. The second patent covers the automatic detection of different types of fiber tips that can be used in a variety of procedures without the need for input, which can make the laser more flexible and easier to use.

"These patents cover important capabilities that we are eager to integrate into our existing designs," said Federico Pignatelli, Interim CEO at Biolase. "The fiber tip detection patent gives us a very useful technological design that will allow the selective and automatic recognition by our laser systems of consumable product types such as fiber tips without requiring further input or interaction by the user. This functionality combined with the patent for the technology that enables simultaneous tissue cutting and image feedback, provide Biolase with a number of opportunities to expand our Waterlase MD technology at the system and accessory level."

The first patent, No. 7,292,759, contains independent and dependent claims that disclose the use of multiple fibers and use of different wavelengths that allow the delivery system to send and receive electromagnetic energy, as well as the integration of camera functionality into the handpiece design. Illumination of the target site, disclosed in this patent in multiple independent and dependent claims, is already built into the Waterlase MD handpiece design. The patent has 58 claims, two of which are independent.

The second patent, No. 7,290,940, contains device and method claims related to the utilization of adaptors to recognize types of fiber tips and determine whether they can be accepted by the laser system or not. The patent has 34 claims, three of which are independent. 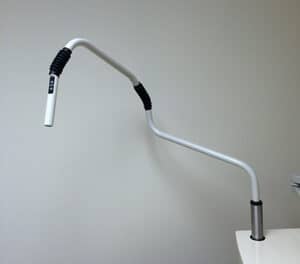