From behavior modification to retention

Figure 1: Progressive pictures of a patient showing treatment of an open bite due to tongue thrust. Note the dramatic reduction in the open bite simply by controlling the anterior posture of the tongue. 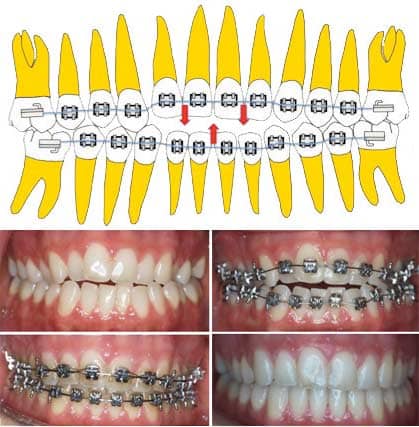 Figure 2: For mild open-bite malocclusions (1 to 3 mm), placing step bends and meticulous bracket positioning can help reduce the open bite without any significant side effects. In this patient, the anterior brackets were placed more gingivally as compared to the posterior brackets, to aid in correction of the open bite.

Anterior open bite (AOB) is characterized by “insufficient overlap of the lower incisors by the upper incisors.” The prevalence of anterior open bite ranges from 1.5% to 11% among various age and ethnic groups, and it has been shown that approximately 17% of orthodontic patients have open bite.1,2 The etiology is complex, potentially involving skeletal, dental, respiratory, neurologic, or habitual factors.3,4

Open bite is considered a challenging malocclusion to treat, and its correction is prone to relapse. Treatment is usually targeted at obtaining a positive overlap of the maxillary and mandibular incisors. There is no consensus as to the optimal therapy for AOB. It can be treated by moving the teeth in the alveolar bone and soft tissue housing by employing interarch orthodontic mechanics. It can also be treated surgically by moving the skeletal bases. Behavior-modifying appliances might be indicated when digit sucking or interincisal tongue posture is identified.

The patient shown in Figure 1 presented with the chief complaint of a gap between the upper and lower teeth and tongue thrust. A tongue crib was placed to control the habit. After 6 months of active wear, the tongue thrust was sufficiently contained to begin fixed appliance orthodontic treatment. We strongly recommend tongue crib therapy before starting fixed appliance therapy. We also recommend leaving it in the mouth during active orthodontic treatment as long as it does not interfere with treatment.

Aesthetic diagnostic considerations also play a vital role in instituting the appropriate mechanics for open-bite correction. Inadequate incisor display warrants extrusion of the anterior teeth for optimal smile aesthetics. However, if there is a gummy smile or excessive display of the incisors, we recommend intrusion of the posterior teeth using temporary anchorage devices.5

Anterior open bite malocclusion can be one of the most demanding challenges for the orthodontist, primarily due to the difficulty in controlling the posterior vertical dimension.6

Popular methods of correcting a dental anterior open bite include employing anterior box elastics or placing a step bend or a combination (Figure 2). Box elastics extrude and tip the incisors back, as the force applied is usually anterior to the center of resistance (Cr) of the incisors. This creates a clockwise moment, thereby limiting the amount of overbite (or overcorrection) that can be obtained. A step bend, on the other hand, extrudes the anterior teeth but also creates a counterclockwise moment on the posterior segment that tends to worsen the existing open bite by tipping the posterior teeth forward6 (Figure 3). Although step bends have been shown to work efficiently in minor open bite cases (less than 3 mm), severe cases might show worsening of the open bite with loss of torque control over the incisors. 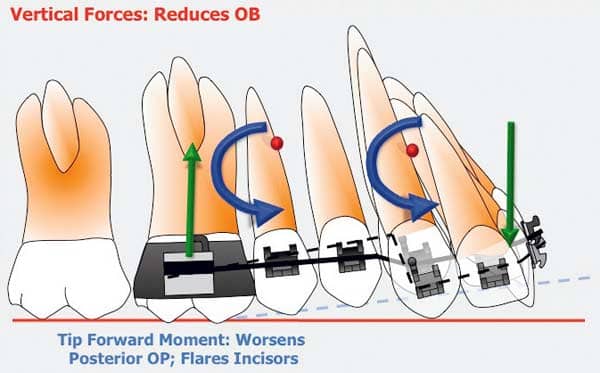 Figure 3: The step bend creates equal and opposite forces on the anterior and posterior segments (green arrows). However, the moments (in blue) are in the same direction, causing worsening of the open bite condition by canting the posterior occlusal plane. 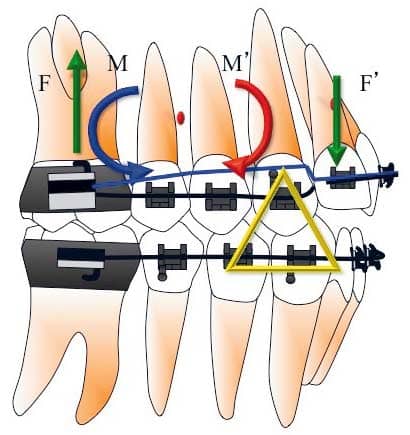 Figure 4: An extrusion arch (in blue) tied to a rigid anterior segment creates a one-couple force system that generates a single force (F) anteriorly (in green). The moments (M) generated (in blue) are counteracted by another set of moments (in red) using elastics (yellow) as shown. This example is assuming that the center of resistance of the posterior segment is between the roots of the premolars.

The preferred archwire on the anterior and posterior segments is stainless steel, .017- x .025-inch or higher. The extrusion arch can be a .017- x .025-inch or a .016- x 022-inch CNA (from Ortho Organizers). The magnitude of extrusive force used is around 40 g for the four incisors (Figure 5). Placing a .016- x .022–inch CNA archwire directly into the bracket slots without any auxiliary archwires can also give similar results for mild to moderate open bite cases.

The problem of retaining open bite corrections is one of the biggest challenges facing orthodontists. In our experience, relapse tendency can be minimized if a habit-breaking appliance or a tongue crib is used for at least 6 months prior to any incisor extrusion mechanics.9,10 Your selection of retention device should be based on etiology and the mechanics employed to close the bite. A silicone positioner is often helpful if used for 4 hours during the day and during sleep for at least 6 months. We suggest using lingual upper and lower fixed retainers. After the positioner use, a wraparound retainer for the upper arch is better than a conventional Hawley, as our objective should be to prevent wires between the occluding surfaces. 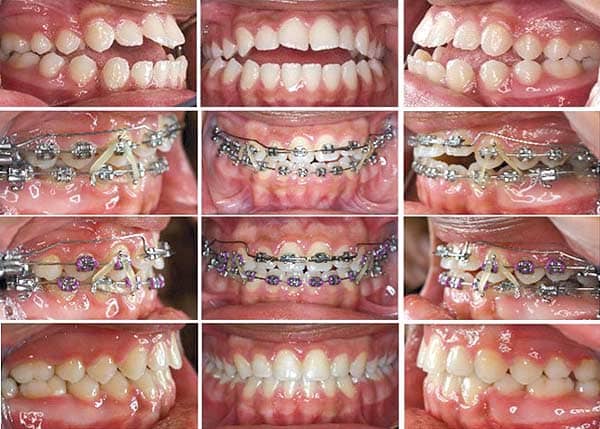