“Airway” Knowledge Has Changed My Diagnosis and Treatment Planning 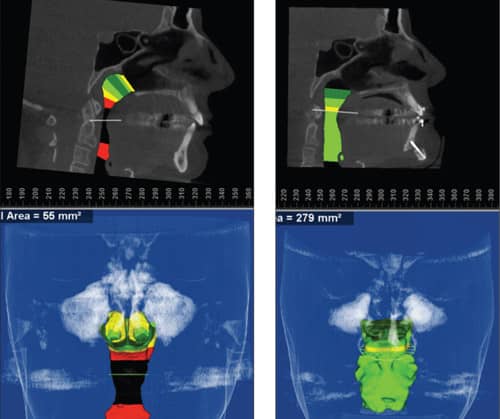 Let me start by saying this is personal. Not personal in the way that I take it personally, but in the way that as one who suffers from obstructive sleep apnea (OSA), I understand precisely what dealing with this disease entails. If I can have a hand in helping another avoid the difficulties I’ve had, I will.

Professionally, I’ve been involved in the HSO (Henry Schein Orthodontics) task force on finding orthodontic solutions for OSA since 2012. I’m passionate about orthodontists understanding how we can improve our patients’ quality of life by reducing the frequency and severity of OSA, using techniques we currently use, technology that’s readily available, and by simply altering our paradigm about who we are and how we practice. Screening for airway problems and treatment planning to increase the size of the airway—it’s a small change, with a big effect.

We now have tools that allow us to incorporate airway analysis on a day-to-day basis. Low-dose 3D imaging, sophisticated home sleep tests, and our ability to accurately superimpose 3D images all contribute to our understanding. We can now confirm what our orthodontic forefathers believed to be true.

OSA has been associated with increased risk of stroke, hypertension, obesity, congestive heart failure, Type 2 diabetes, motor vehicle accidents, and reduced quality of life. The worst part for me, however, is the day-to-day degradation in quality of life. Chronic exhaustion leads to difficulties with memory, intimacy, and interpersonal relationships, as well as  Type 2 diabetes, which means choosing carefully which foods to eat and when. It means wearing a CPAP (continuous positive airway pressure) device, taping my mouth shut (so the forced air goes into my lungs), and continuous dehydration.

The most commonly recommended therapies for sleep apnea are CPAP or an oral appliance (most of which position the mandible forward). Neither of these solves the underlying anatomical problem and both require long-term compliance for efficacy. Our task force found that properly planned orthodontic treatment alters the anatomy of the face and mouth in ways that can have a profound positive effect on the airway, and eliminate or reduce the severity of OSA. So, when I treatment plan, every decision is designed to be “Airway Friendly.”

Figure 1: A 9-year, 11-month-old white male in the mixed dentition with mild upper and lower spacing and an apparent tongue thrust.

Figure 2: His pan showed that all the teeth were present.

Figure 3: The lateral cephalogram showed a balanced profile with no apparent airway issues.

Figure 5: A CBCT revealed a minimal cross-sectional airway (MCA-108 mm2) was appropriate for his age, but the polysomnogram before and after adenotonsillectomy showed he still had apnea.

Miles (figures 1 to 3) presented as a 9-year, 11-month-old white male in the mixed dentition with mild upper and lower spacing and an apparent tongue thrust. He has a nice smile arc. His pan showed that all the teeth were present and the lateral cephalogram showed a balanced profile with no apparent airway issues. Based on the intraoral and radiographic evaluation, I would probably place Miles in recall.

The problem is, Miles has OSA. His mom filled out the Pediatric Sleep Questionnaire (PSQ) and he scored a 16 (figure 4) with “heavy breathing” (anything over 8 or any indication of snoring is a warning sign). A CBCT revealed that his minimal cross-sectional airway (figure 5: MCA-108 mm2) was appropriate for his age, but the polysomnogram (PSG—overnight sleep test) before and after adenotonsillectomy showed he still had apnea. The sleep physician put him on CPAP. He was referred to me to find an alternative that wouldn’t place retrusive forces on the upper and lower jaws.

Figure 6: Even before the lower posteriors were uprighted, with Rapid Palatal Expansion, the MCA jumped from 110 mm2 to 377 mm2 (figure 7).

Figure 7: Even before the lower posteriors were uprighted, with Rapid Palatal Expansion, the MCA jumped from 110 mm2 (figure 6) to 377 mm2.

Although there is no intraoral crossbite, using 3D CBCT images allows measuring the actual widths of the upper and lower jaws (figure 6). Note that the upper molars were flared buccally and the lower posteriors were tipped lingually to compensate for a narrow maxilla.

Rapid Palatal Expansion (RPE) has been shown to increase MCA1 so we expanded the maxilla. Even before we uprighted the lower posteriors, the MCA jumped from 110 mm2 (figure 6) to 377 mm2 (figure 7)! Miles’ latest PSQ showed no apnea and he no longer needs his CPAP. Mom’s comment: “Once the expansion process was done, we were absolutely amazed at what a new kid we had.” Note that unless I was specifically looking for the warning signs of a limited airway, it would have been very easy to miss Miles’ OSA.

Theresa had orthodontic treatment with extraction of bicuspids as a teen. I retreated her in 2004, recommending orthodontics and orthognathic surgery to improve the profile (I was not as aware of airway problems at that time). Theresa did not want surgery and we aligned her teeth and left a compromised occlusion. She wore a splint as a nighttime retainer.

Theresa returned in November 2016 having been diagnosed with severe sleep apnea (AHI 72.7, RDI 83—normal is <5) and wanted to consider a sleep appliance (figure 8). We discussed all of her options and she decided to undergo orthognathic surgery to correct her bite and the apnea at the same time.

In the past, I would have spent 12 to 18 months aligning teeth prior to having the surgery. With OSA, however, it’s important to normalize the airway ASAP, and Theresa became my first “surgery first” patient. I bonded brackets in June 2017, and immediately scanned and ordered passive .019 x .025 beta titanium Suresmile wires. The surgery was then delayed a couple of months due to insurance issues, but we added surgical hooks the day before surgery.

Figure 9: Approximately 2 to 3 months after orthognathic surgery to correct her bite and the apnea.

Note that in the past, I wasn’t paying attention to airway and I didn’t explain the consequences of untreated OSA. Due to my ignorance, Theresa suffered needlessly for a number of years. In addition, note that my sequence of treatment changed, both as a result of OSA knowledge AND the technology now available to make these important changes. Also note the improvement in smile arc once some of the numbness wore off (figure 12).

Chris (figure 13) was referred by the sleep doctor for an oral appliance. She felt fatigued all day and had an Epworth Score of 9 (normal is <5), a history of snoring, and a history of waking 3 to 6 times each night. Her apnea hypopnea index (AHI) was 7 and respiratory distress index (RDI) was 23 (<5 normal for adults). She was planning to use a CPAP while we figured out our solution.

Figure 13: Patient referred by the sleep doctor for an oral appliance.

I discussed the difficulty in fitting a sleep appliance around the severely malaligned lower anteriors and we discussed extracting lower first bicuspids and setting up for a mandibular advancement. She told me, “No CPAP and no surgery.” Given those constraints, I recommended aligning the teeth as well as possible, then reevaluating the apnea. Chris requested Invisalign®.

Obviously, this is not an ideal solution, and if I were only focused on teeth, I would probably have had severe misgivings about any type of treatment. As orthodontists, we are taught to focus on ideal. In the sleep apnea arena, however, any improvement may be a partial success. I felt by aligning her arches and correcting archform, I would give more room for her tongue and potentially reduce her apnea. After alignment (figure 14), Chris’ AHI dropped from 7 to 4.8 and her RDI dropped from 23 to 8.3! She sleeps through the night, wakes rested, and loves her new smile (I realize it’s an orthodontic compromise, but it’s an airway success). As predicted, we didn’t solve the entire apnea problem with orthodontics, but we reduced it markedly and we’ll fabricate a sleep appliance for Chris to wear at night—that will serve as her retainer.

As you can see, the actual orthodontic techniques are not exotic or unusual. The really big thing was shifting my paradigm from being tooth-centered to airway-centered. I now notice things I used to miss, and I consider treatment options I would previously have not considered.

Being aware of airway issues has opened new referral patterns (note all of the above were referred by sleep physicians), and has changed our in-office protocols. Every patient is screened with an Epworth Sleepiness Scale (adults) or a PSQ (children). When I evaluate the health history, I make special note of diabetes, high blood pressure, etc, which are comorbidities of sleep apnea. My clinical exam now includes nostrils, bags under the eyes, posture, and a host of other clinical signs associated with apnea. I don’t finalize a treatment plan before evaluating a 3D CBCT.

In essence, airway has become the lens through which I view my profession and I believe orthodontists are singularly positioned to be game-changers in this area. We see a large number of patients—who also have brothers and sisters, fathers and mothers, all of whom may have similar problems; we have excellent screening tools; and we have more treatment options than any other profession. Not only can we provide sleep appliances, but we can alter patients’ anatomy in ways that may provide a noncompliant long-term solution. We have the opportunity to not only improve appearance, but also to improve our patients’ health and everyday lives. I believe it is incumbent on us to do so. OP

Louis G. Chmura, DDS, MS, earned his MS in Orthodontics from the University of Michigan in 1987 and is an early adapter of emerging technologies. Chmura has a special interest in systems and incorporating new technology (TADs, laser, CBCT, SureSmile, sleep apnea) and enhanced diagnostic considerations (smile design and sleep apnea) into the orthodontic practice. He has written numerous articles and book chapters and has presented internationally on expanding the role of orthodontics in health care. 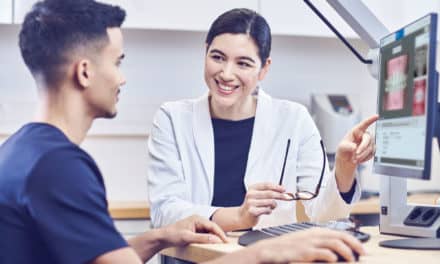 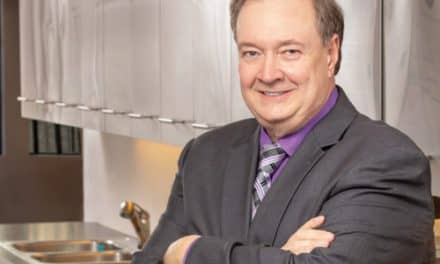